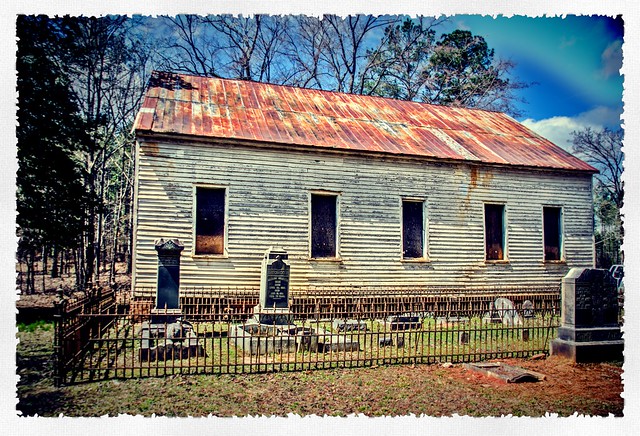 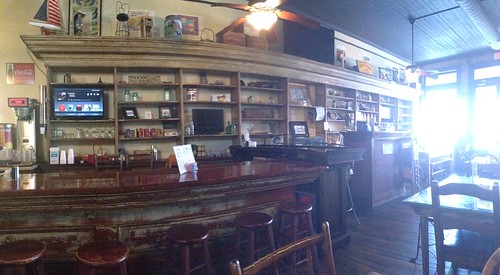 After lunch I suggested to Alan that we check out Horn Creek Baptist Church a few miles south of Edgefield. I had visited once before when Tommy Thompson and I came down this way. At that time the church was blocked off with no trespassing signs and had been subjected to vandalism. There were even fire rings on the floor of the church. It was a wonder the historic church hadn’t burned down. I was hoping there was something still left that we might be able to visit.

Even though it’s only four miles south of town, getting to Horn Creek isn’t easy. The pavement soon gives out, and Old Stage Coach Road turns into a rutted mess. Hunters frequently run four-wheel drives up and down, making the ruts deeper in places.

Alan and I found the church, and things had changed from a year ago. The first thing we spotted was a nice new chain link fence with a substantial gate. The old outbuilding was gone, and a nice, new modern building stood in its place. As for the church, workers were installing and painting handrails at the entrance to the church. 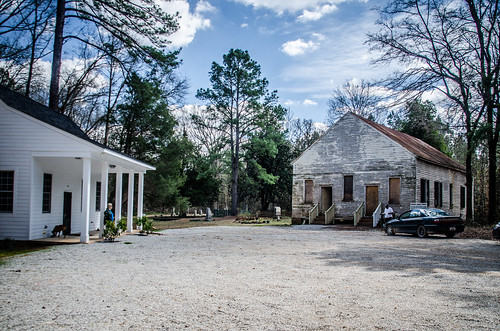 Since there was someone on site we pulled in and approached the workman with the intent to ask if we could look around. As we were introducing ourselves, a gentleman come out of the new building and introduced himself as Barney Lamar, the onsite caretaker for the site. The new building was actually his residence, and he lives onsite to try to combat the vandalism that has plagued this location.

“The constant battle that we’ve had is vandalism….It bothers me that that is a common characteristic of the times we live in, that people are willing and inclined to do that. That’s why I’m here.” 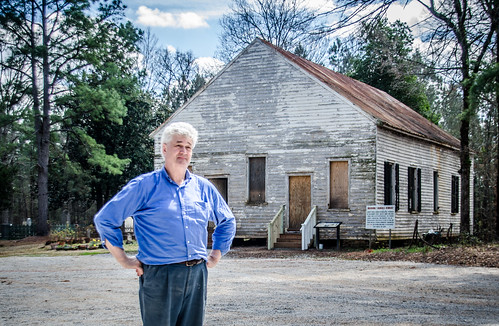 Alan and I introduced ourselves and made our request. Barney was more than gracious. He headed back into the residence and emerged with two books on the history of the church which he presented to Alan and me. The booklet was produced in 2014 by the Edgefield Historical Society. 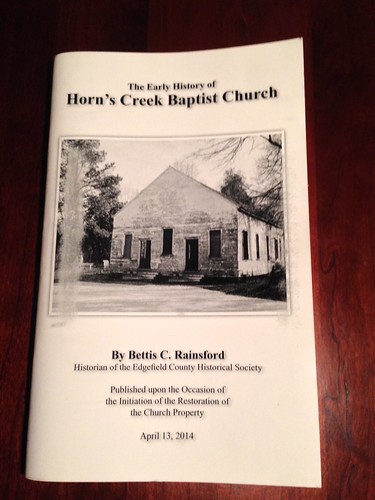 Barney began with a tour of the cemetery. He was particularly loquacious, and even agreed to be recorded for my upcoming podcast episode. Barney pointed out several prominent headstones, including that of the Bettis family, one of the main families in the church. 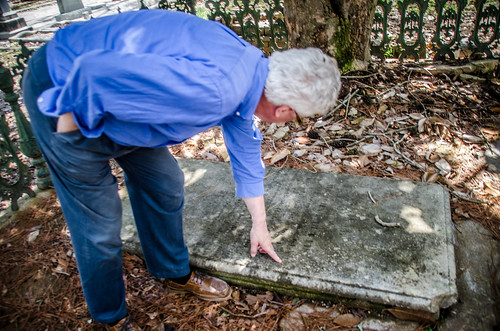 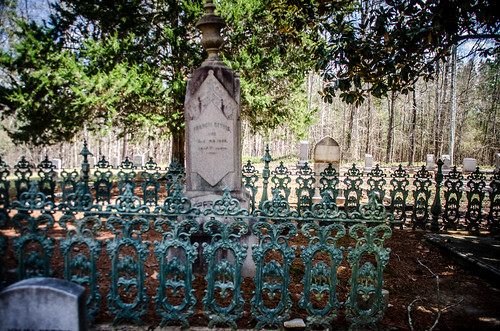 The cemetery wasn’t large, but contained a wide range of graves. According to Barney, the earliest graves are either unmarked, or lost to time. Most of the graves are “early or later 19th century, but they do go up to modern times. Some of the local families are still burying their dead here.” Barney said that these would be families with a history with the church – some had even been baptized in the namesake creek. The most recent burial we saw was 1997. 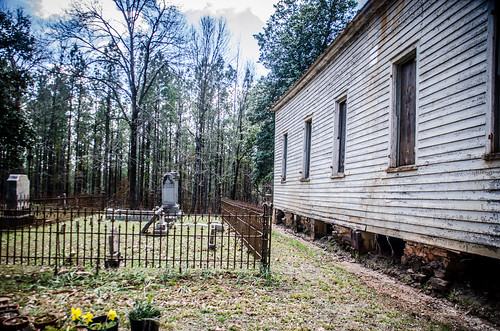 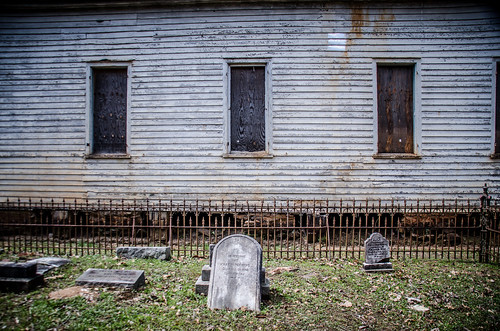 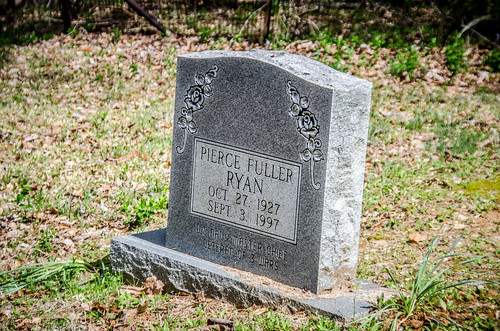 Barney told us that the church was founded in the 1760s, making it one of the oldest churches in the Upstate. In 1942 the church congregation was dissolved, and the property passed to the Edgefield Baptist Association. In 1976, as part of a Bicentennial project the church underwent restoration and many of the headstones were restore. Unfortunately, it didn’t prevent vandals and time from taking their toll.

Recently ownership has passed to the Edgefield Historic Society, which is undertaking the current conservation efforts. Barney pointed out some of the conservation work on both the graves such as repositioning toppled headstones, and the iron fencing surrounding the family plots. He said that they were also adding plantings that would be historically appropriate for the cemetery. 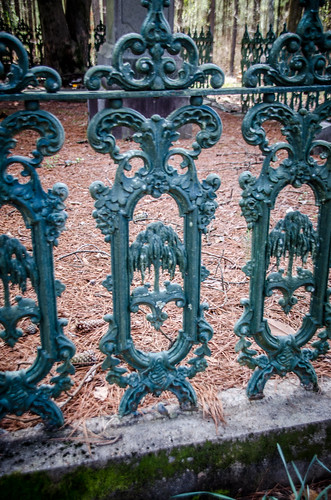 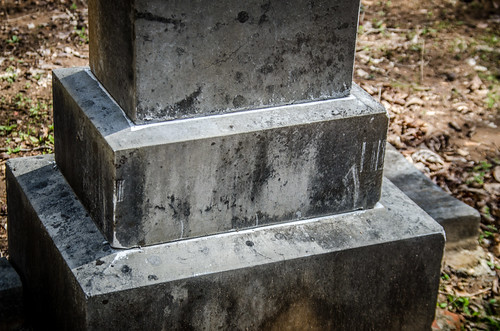 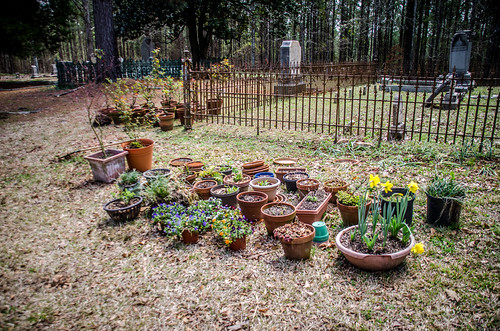 “We got a long way to go, but we’re getting there. We had given up on doing anything to the church until we got someone living here.”

As we were talking to Barney and taking photos of the cemetery another vehicle arrived. A man and woman emerged and headed in our direction. The man introduced himself as Bettis Rainsford, namesake of the Bettis family of Horn Creek, director of the Edgefield Historical Society, and author of the booklet which we had just been presented. Bettis gave us more information about the conservation efforts, then turned his attention to the workers. 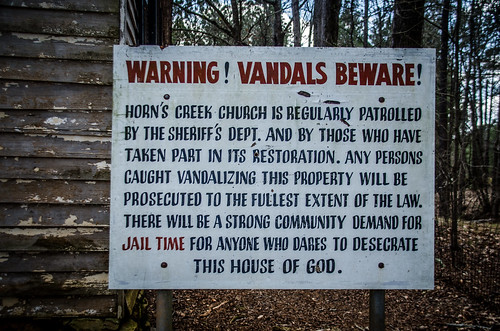 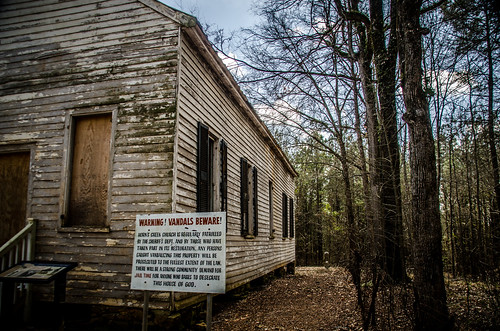 Alan and I headed inside. The windows have been boarded up for now, and there was still graffiti on the walls. The church was temporarily being used for storage. Some of Barney’s personal effects were there, but there were also construction items and other items relating to the church. There was still quite a bit of damage, such as holes in the floor and buckling boards. The good news was that the bones of the building were still good, and that the vandalism hadn’t damaged the church past the point of no return. 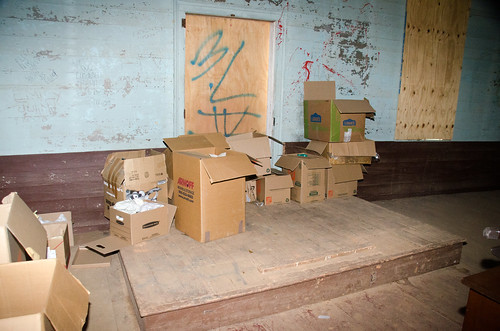 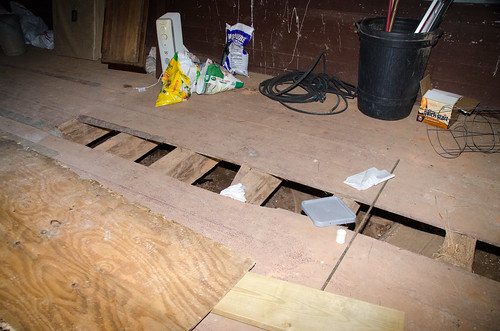 One of the most interesting features was the painting on the ceiling. There is a geometric design right in the center and cherubs in each of the four corners. The paintings were restored with the 1976 conservation efforts, and this restoration will try to make sure that they are preserved. 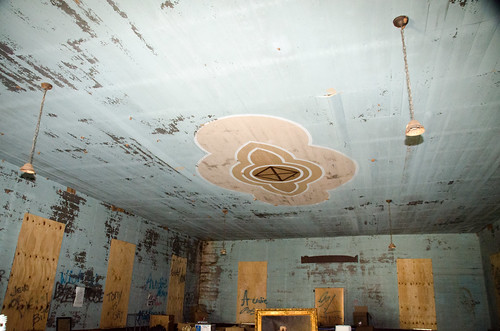 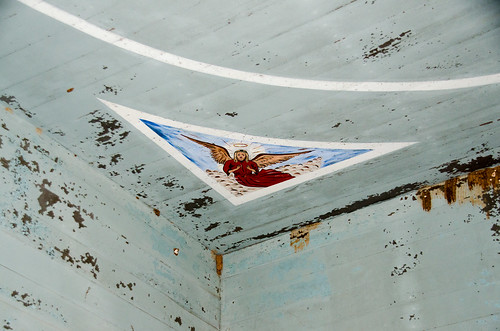 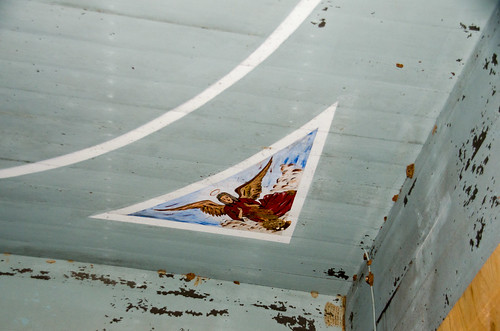 The ceiling was painted by a Mr. E. V. Richards. According to one art blog…

E. V. Richards, Sr., an English-born architect, glazier, fresco painter, protraitist, and “scene artist,” learned the art of stained glass creations, wood engravings and comedy illustrations in his native land. Richards lived in Washington, D. C. during the 1870s and was said to have assisted Constantino Brumidi with his artwork inside the dome of the U. S. Capitol building.

Richards had moved to Wilmington, NC by the late 1880s. Here, he painted drop scenes and banners for Thalian Hall productions, early billboard-type signage for local merchants, and elaborate mechanical displays that incorporated still objects and moving scenery. To augment his salary, and because it came so easily to him, Richards painted local scenes and taught art through private lessons.

Richards moved to Edgefield for awhile in the 1880s, and advertised in the local papers. 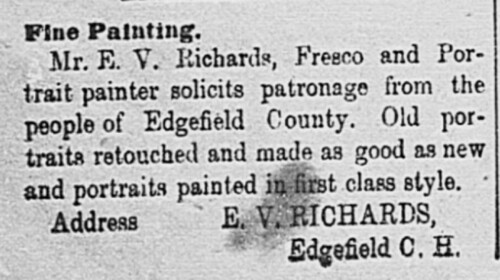 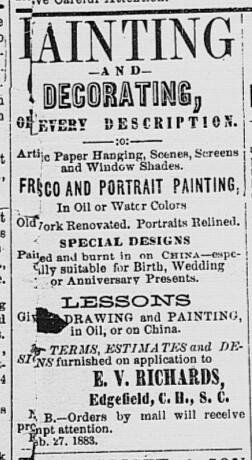 I had asked Bettis about their goals for restoration. He said that they would try to restore it to its original condition, repainted white, with a new tin roof, and other repairs. While I applaud the Society’s efforts, and think they are doing a fantastic work here, part of me hopes that they don’t restore it too much. The weathered clapboards and rusty roof have a certain charm, and it would be a shame if this church took on the appearance of just any other old church in the county. Given their attention to historical detail, though, I don’t think that’s a danger.