Yeah, I bought a Powerball ticket. With the jackpot reaching an unthinkable amount, why not dream a bit? After all, they say that if you don’t play you can’t win. If I can spent money on a Star Wars ticket, then this is a reasonable price for just as absurd a dream.

…and a dream is all it is. One or two people might get extremely (and I mean extremely) lucky, but the reality is that all we are going to do is find ourselves a few dollars poorer, and perhaps disappointed that our grandiose dreams didn’t come through.

It’s been funny listening to folks speculate and dream big, both on social media and in casual conversation. One guy told a reporter he would use the money for “a bunch of hookers and cocaine.” Sounds like the sort of smartass answer I’d give, not meaning a word of it.

As I was buying my ticket for the current draw the woman in line in front of me was equally amusing, in a different way. She looked to be in her 80s, and I got the feeling that this was the first lottery ticket she had ever purchased. She was so sure she was going to win that she was asking the clerk questions that were better suited to a financial adviser or tax attorney. How would the money be paid out? She wanted to know if her heirs would get the money if she got the 30 year annuity. What would happen if she lost her ticket? Etc., etc. I almost wish I’d had a recorder going.

Lots of news articles have flooded the airwaves with tales of winners who lost it all (most notoriously Jack Whitaker), and some of the tax realities of winning that much money and other financial considerations.

NPR has had some of the best coverage of lottery-related articles. One statistic they quoted gave me pause, though. They said that you were 25 times more likely to be elected President of the United States than to win the Powerball Jackpot. Maybe from a mathematical standpoint, but not in reality. ANYONE can by a Powerball ticket with a chance to win. Huge portions of the population are disqualified from running for president. If you’re going to make comparisons, make sure they make sense.

Apart from simple odds and stats, though, the articles I’ve found most enlightening are the Powerball Simulators. These run a series of draws against either a set of numbers you pick, or a a quick pick, if you prefer. They were then show how much money you would have won based on that simulation. There are several different flavors, but one of the best is the one on the LA Times website, which is based on the current jackpot of $1.4 billion.

The simulation lets you start with a $100 investment and plays one $2 ticket per drawing until your money runs out. 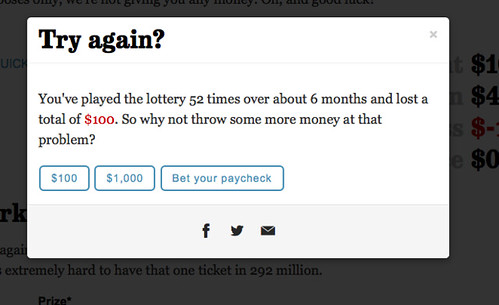 As you can see, I lost, and it took 6 months for that many draws. You have the option of increasing the amount you spend, including the option to put in an arbitrary number. 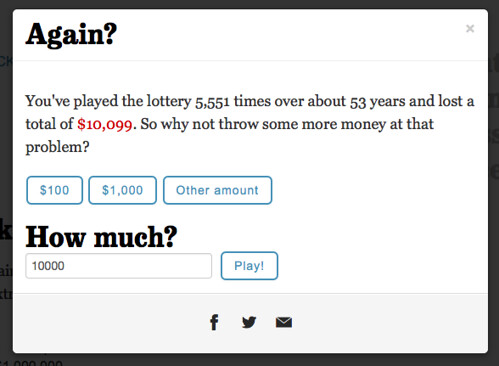 Another simulator only allows quick-picks, but you can set it to stop after a certain jackpot amount is won. 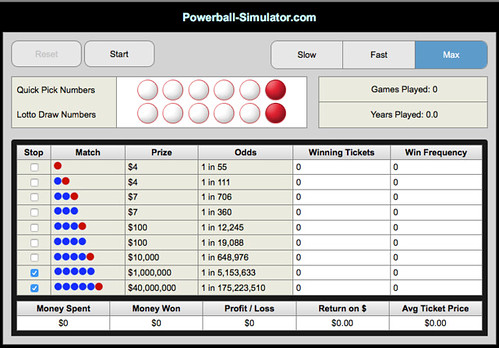 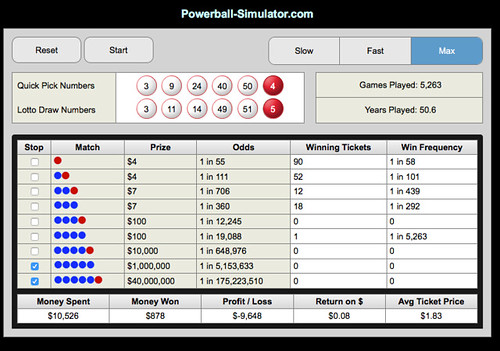 Adam Lamer’s simulator is more thorough, although it doesn’t allow for quick picks. You can adjust the jackpot amount, and you can add multiple tickets. This helps illustrate the point that having more sets of numbers really doesn’t improve your odds.

So what would I do if I won the lottery? Probably make a lot of people mad. That’s such a public investment that any expenditure would come under scrutiny. “Why did you give that money to XYZ charity that I think is a scam, when you could have given it to me, your long lost fourth cousin three times removed? After all, I am family!” I can hear it now. It also paints a huge target on your back for said scammers and schemers.

Ultimately, I think the best method would be to pull out enough to live on comfortably and elegantly. Put the rest into a corporation, and let them deal with all the crazies. Pay someone else to worry about it.

..bet then again, it’s not something you have to worry about, is it? After all, I have the winning ticket. 😉 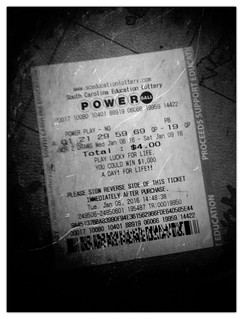