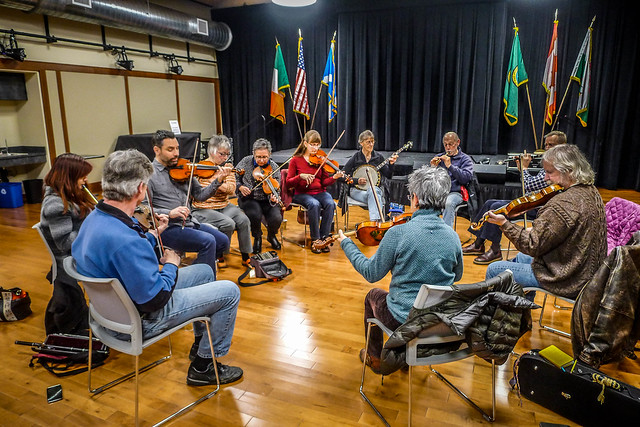 I wanted a challenge. I got a challenge. On Sunday I attended the monthly Irish Jam Session at the Littlefield Celtic Center in Mount Vernon. I found myself in the midst of some incredible traditional musicians and I also found myself struggling to keep up. Even so, it was a blast.

This was a case of “be careful what you wish for.” Most of the sessions I’d attended lately were learning sessions taken rather slowly. It was hard to get a true feel for the music. I wanted to attend a session where it was assumed that everyone knew what they were doing (even if I absolutely DIDN’T know what I was doing.) I was prepared to listen and learn, joining in when I felt comfortable. This jam session certainly fit that bill.

The Celtic Arts Foundation of Mount Vernon was established in 1997 to “sponsor, encourage and promote Celtic culture through events and educational activities,” according to their mission statement. In 2012 the CAF began seeking a permanent home and purchased property for an event space. Construction was begun in 2014, and in June of 2015 the Littlefield Celtic Center opened.

The center hosts workshops and concerts throughout the year. Earlier this fall we missed a sold-out concert by one of our favorite groups, the Tannehill Weavers. Big name performers come through with concert about twice a month. The center also sponsors two monthly jam sessions, an Irish session on the third Sunday of each month and a Scottish session the first Sunday of the month.

The Irish Jam Session was the next one on the calendar, so it was that which I planned to attend. The descriptions for the both jam sessions were somewhat intimidating. Here are some excerpts from the Irish session:

The music is learned and played almost exclusively by ear, and tunes are played together as ‘sets’ of three or more…each of which is repeated a number of times (usually 3) before the next tune is started. The emphasis is on the melody itself (what the Irish like to say is ‘the soul of the tune’); and so while backup and rhythm players are welcome, they are usually asked to play ‘behind’ and ‘under’ the melody players….there is a famous maxim in the Irish tradition suggesting that a session should include only “one guitar, one bodhran,…and one spoon!” That being said, the ultimate goal of any Irish session is to provide a welcoming place where most of those present can play most of the time, where people new to the music can learn not only the tunes but the culture behind the music, and where more experienced players can learn tunes and technique from players outside their usual sessions. We welcome both listeners and those who are interested in learning to play this music themselves. Please feel free to bring recording devices and ask questions; we do request, however, that you leave music books and stands at home, and that you not use personal hand-held-devices during the session.

It was the phrase “one guitar, one bodhran” that got me. What if another guitarist showed up? Would they kick me out? Despite my trepidation on the third Sunday of the month I headed downtown to see what this was really all about.

On this particular Sunday it was cold, windy, and raining. Fortunately I found a parking spot on the street near the entrance to the building. 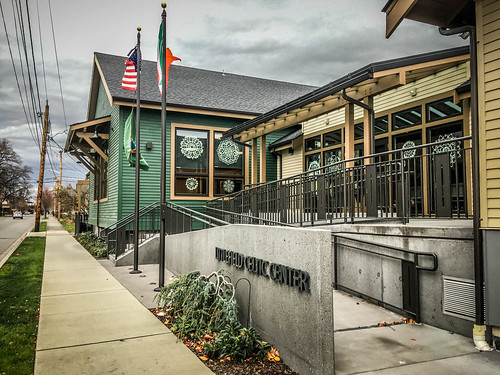 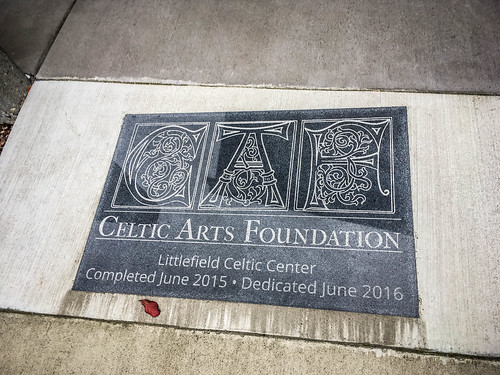 I had gotten there at 12:30 to get set up and make sure I knew the lay of the land. Other cars were parked along the street, so I assumed others were there. Turns out that these were for the Anglican Church across the street. As far as I could see there was no one at the center. The doors were locked.

I waited until 12:45 in my car, then wandered around to see if there was another entrance and to make sure I was in the right place. A woman was emptying a trash can at a side door, so I asked if I was at the right place. She assured me that I was, and that she was just about to open the front doors. She also said that most folks started wandering in right at 1:00. Good to know.

Roberta opened the doors for me and introduced herself. She made sure I signed up for the center’s email list and gave me some more info about the center. She also said that she was a volunteer for the center and that she didn’t play with the Irish group. Her instrument is piano, and they apparently don’t allow piano in the Irish sessions. She plays with the Scottish group. Once again, good to know.

I had left instruments in the car, so I took some time to look around. One side of the facility had offices and conference rooms. The other side had a small performance space with a stage. A set of chairs had been arranged in a circle, with a couple of rows set up for onlookers. Coffee and beer was available. 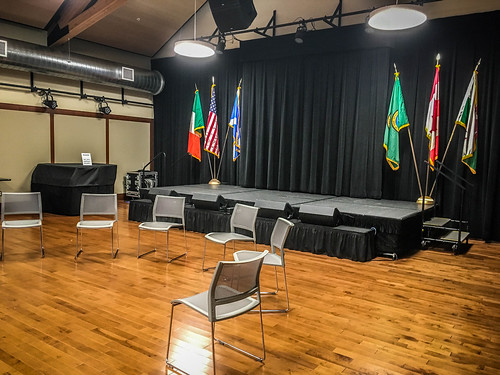 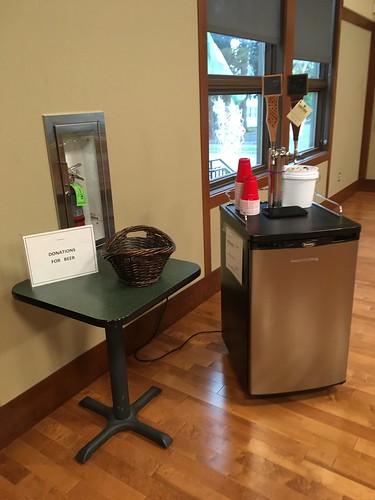 The other musicians began to arrive so I went back to the car to grab my instruments. I decided that I would just bring in the guitar, even though I had the banjo and melodica with me. Given the earlier comments about the piano I figured that the melodica might be view with scorn as being “not traditional Irish.”

Just about all of the other musicians had multiple instruments with them. There were more fiddlers than anything, but each of these also brought tin whistles and other things. In addition to her fiddle, one woman had a tenor Irish banjo in addition to a fiddle, and her husband had a set of Uilleann pipes. One woman had several flutes, and another had brought a Bodhran. One guy had a cittern, kind of like a large mandolin, but with five sets of double strings. There was one other guitarist. OK, so we already had a guitarist and Bodhran player. I guess I could find a set of spoons somewhere. 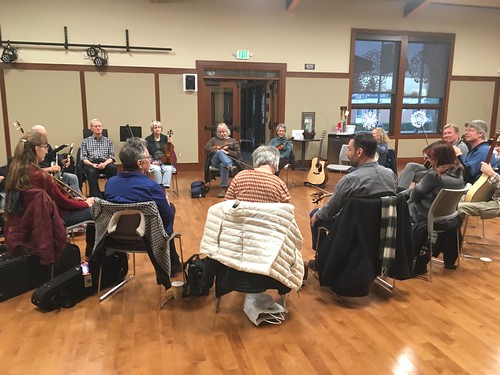 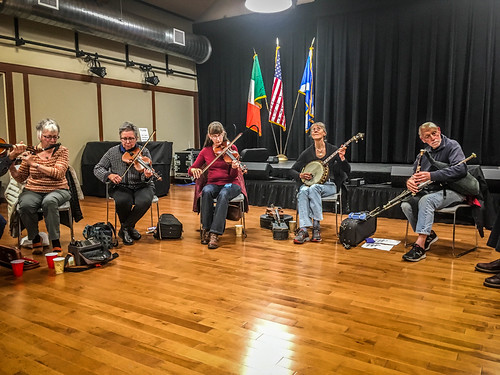 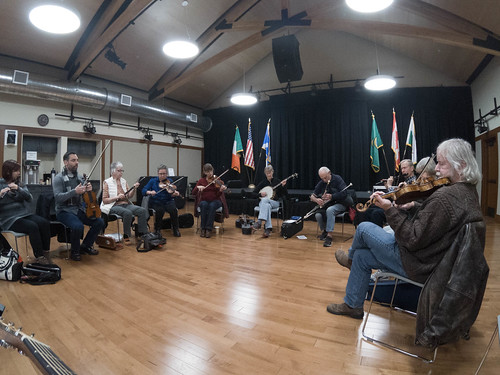 In all there were fifteen musicians, including me. They came from all over the region – from Whidbey Island and as far away as Vancouver. I was something of a novelty, having come all the way from South Carolina. And, despite my lack of experience with the repertoire, I did have some bonafides. I had spent some time in Doolin, Ireland, and I had spent quality time with P. J. Curtis, the noted Irish musicologist and author. In addition to the musicians there were about seven people who had just come to listen.

When the music started it was like going from zero to sixty in about two seconds. Someone fired up a reel and they were off. The usual procedure was that one instrument would introduce the tune and others would join in. That tune would repeat three times. The lead instrument would usually give a “whoop” or some other indication that the tune was about to change, then that lead would introduce another tune which would repeat three times. Three tunes would be introduced in a typical set. The new tunes would usually be in the same, a related key, or a relative minor, but sometimes the modulation was abrupt. There was no way I could figure out the tunes themselves and it was hard enough to keep track of the chord progressions. The title of the tune was never announced unless it was an unfamiliar one. Even then, someone would ask afterwards, “What was that?”

Here is one of the sets of tunes. I have no clue what the titles are.

The other guitarist was much more accomplished than I was, but he said that he wanted to be close enough to watch my chords and follow along. I said that probably wasn’t a wise move. Plus, he was using a “Drop-D” tuning for some songs. I tried the same tuning a couple of times when we were in the key of D, but decided I’d just stick with the regular tuning. The cittern player also said that he had been following my chord progressions. I felt a bit weird about that. As for the banjo player, rather than strum chords she played a single line melody. 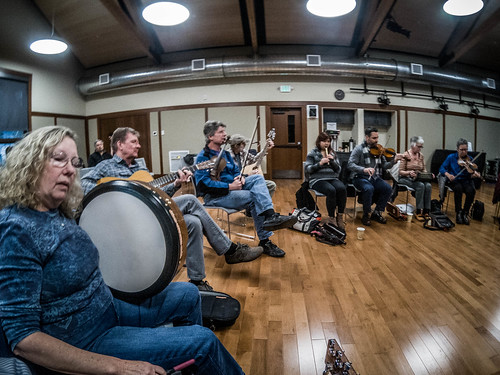 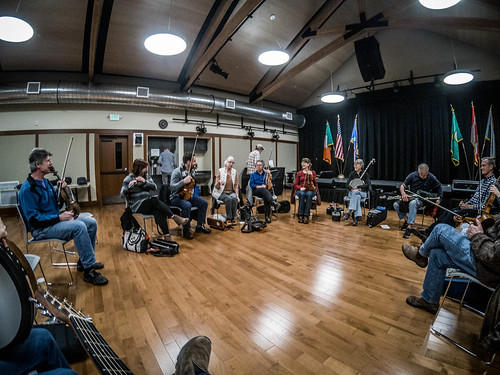 I did make note of the fiddle belonging to woman sitting next to me. She didn’t play often, but quietly picked melodies with which she was unfamiliar. Her fiddle was stunning, though, with a dragon motif. 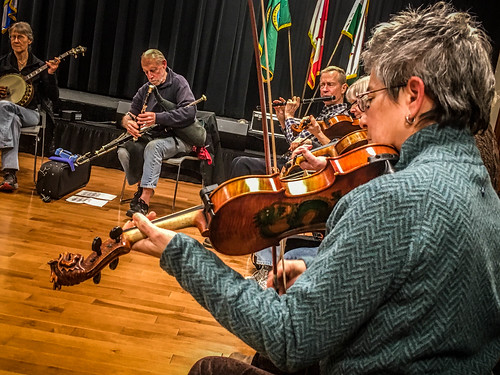 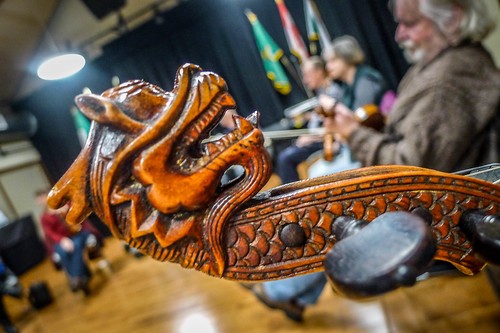 The music continued with only brief pauses for conversation. There were no breaks. If one wanted coffee or beer they just stopped playing and got what they needed. I took very few breaks and by the end of the afternoon my fingers were quite sore.

Here is an music sample. I don’t really remember if this was early or late in the session, but I selected it because it has a different style from the first sample I posted.

At 4:00 the group started to thin out. The other guitarist and cittern player, as well as the Bodhran player, left. Those that remained closed up the circle to continue with a couple more sets. I opted opt, switching my guitar for a camera. 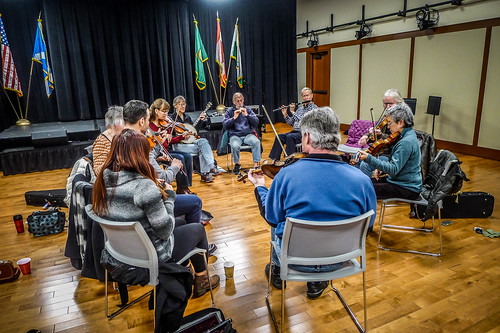 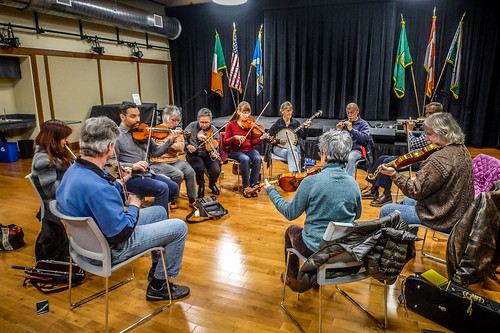 Here’s a video clip of the smaller group:

Soon even those musicians began to pack up. I chatted with the woman who serves as the de facto leader of the group. She said that the various communities have their “home” groups where they learn the tunes. They then bring those tunes to this gathering. She said that there are learning sessions on Monday evenings here at the Littlefield center, but I didn’t see them posted anywhere. While she did invite me to the learning sessions, I did NOT get an explicit invitation to come back to this session. Too many guitars? I had fun. I think I’ll do it anyway.

The music was a challenge, but it was also a blast. I am looking forward to checking out the Scottish jam session on December 3 and seeing how different it might be. I don’t know, though. They had even more rules and they were listed as bullet points. It will be fun to see how many of those I can break. 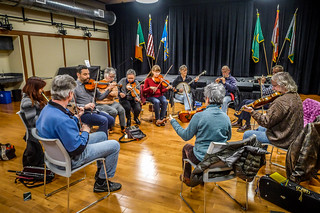