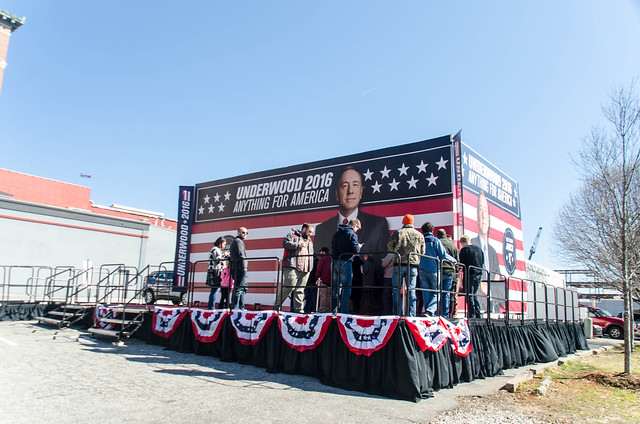 NOTE: I’ve had a very bad cough and head cold this week, so I’m a week behind with this story. Trying to write while not feeling well is almost impossible for me. Anyway, this should have been posted last Sunday…

Saturday night was a big night in Greenville. CBS was holding a debate for all of the GOP candidates at the Peace Center, so there was lots of hoopla in town. The biggest hoopla was fictional (kind of like most of the candidates’ debate points.) Frank Underwood had set up his campaign headquarters in town.

For those that don’t know. Frank Underwood is a fictional character on Netflix’s “House of Cards.” He starts off as a Congressman from Gaffney, South Carolina, and (spoiler alert) over the course of the series, schemes his way into the vice presidency, and ultimately becomes President of the United States. As the last season ended, he was in the midst of a contested re-election campaign. Kevin Spacey plays Frank Underwood, and Robin Wright plays his wife, Claire.

But, back to reality, sort of…

With all of the candidates in town, Netflix decided it was the perfect opportunity to promote the new season of “House of Cards.” Chip and Glynda had spotted the event while out to lunch on Friday, and it had been announced in the Greenville News. Glynda joined the line waiting to view the mock-up “Oval Office.” While in line, a worker told her that anyone with valid press credentials would be able to visit the back, where a reception room was set up. Chip rejoined her with his Erwin Pendland ID, and they were about to bluff their way into the back room, where there was food, drinks, and all sorts of amenities for the visiting press. They had a blast hanging out for the afternoon.

Saturday came, and Glynda wanted to head back down to the Underwood display. Fighting a cold and cough, I reluctantly agreed. As we approached downtown on Wade Hampton we spotted what looked like a UFO flying over town. 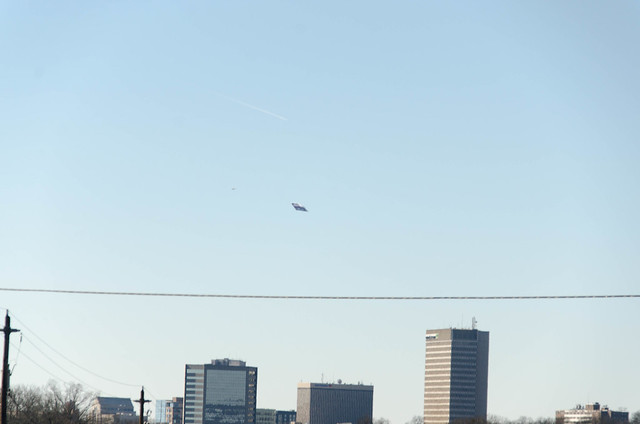 Turns out it was a banner for Frank Underwood. These guys were going all out. 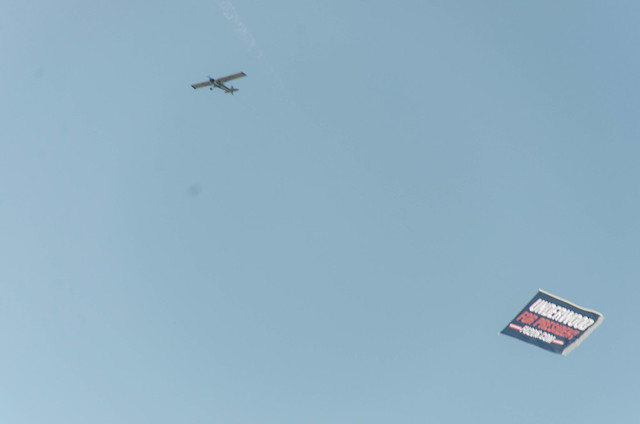 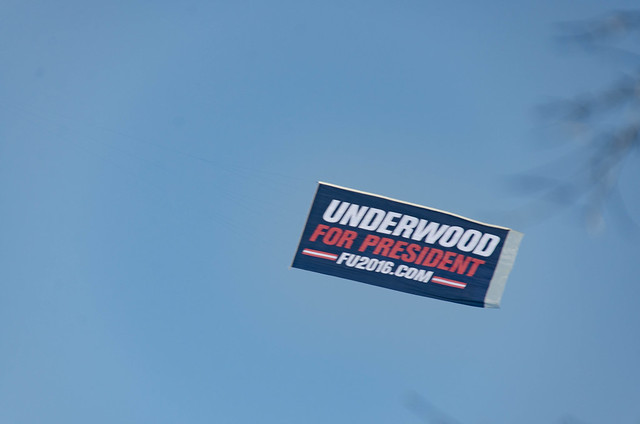 We arrived, and I was a bit surprised. I had expected a small trailer, but what I found was a large event tent. A few people were lined up to go inside. 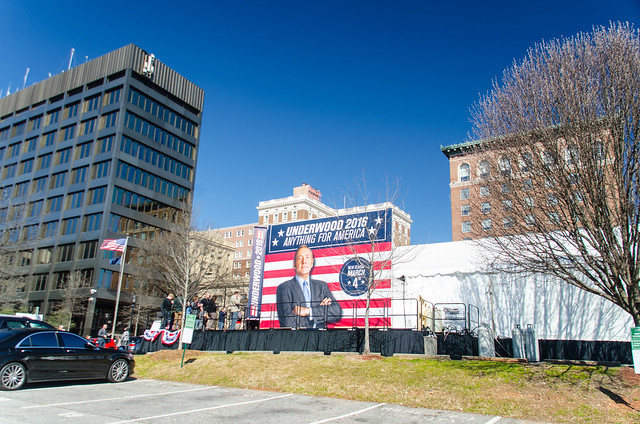 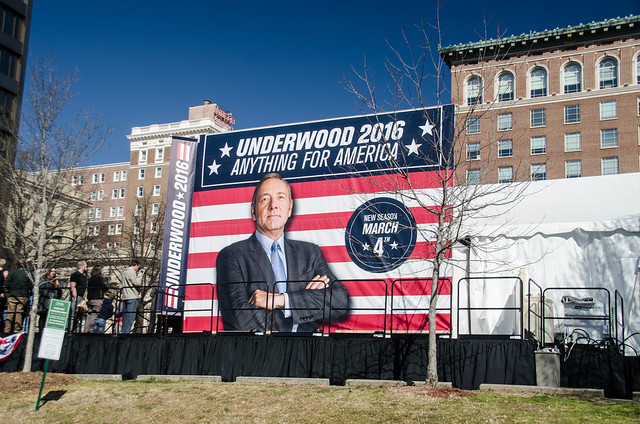 Glynda had her pass, and I had borrowed Chip’s. I also had my RandomConnections press pass, just in case. Glynda led us to the secret door and we entered an unusual corridor. 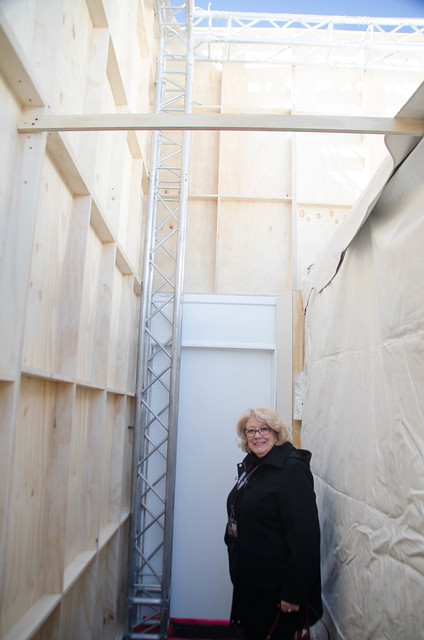 This led to another entrance, where event coordinator Teresa DiMartino met us. I registered as a press official, and I got my own swag bag with campaign materials. We ordered pour-over coffees, and found seats in the fancy digs they had set up. Monitors were showing episodes of “House of Cards”, and there were photos and portraits of Kevin Spacey and Robin Wright all over the room. 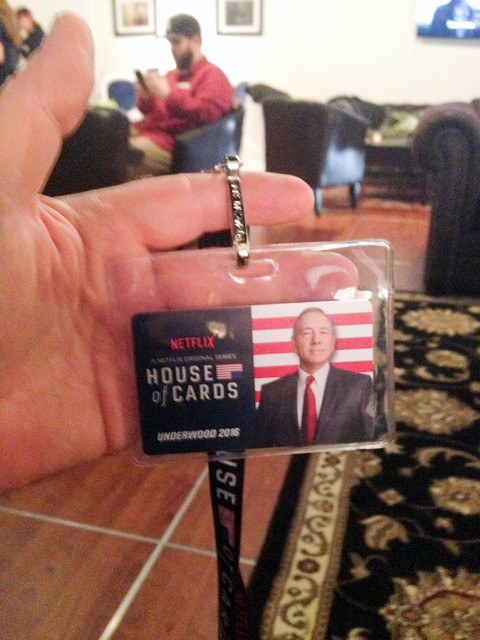 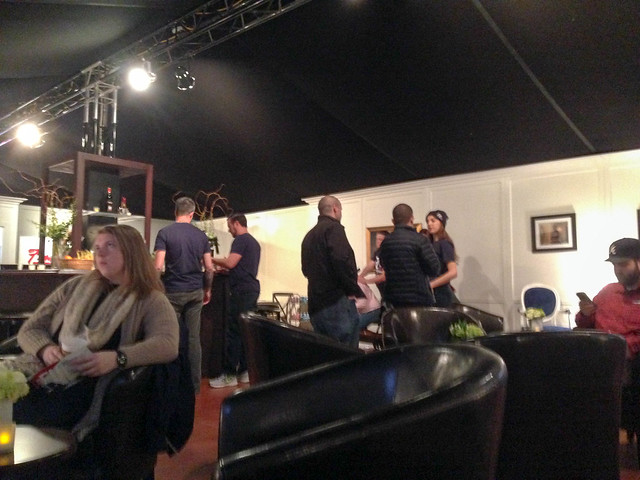 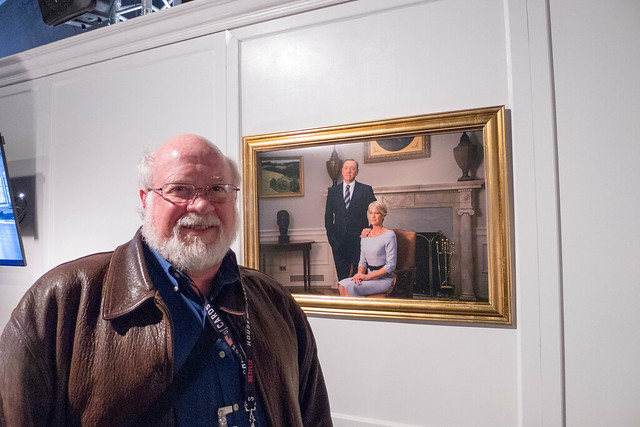 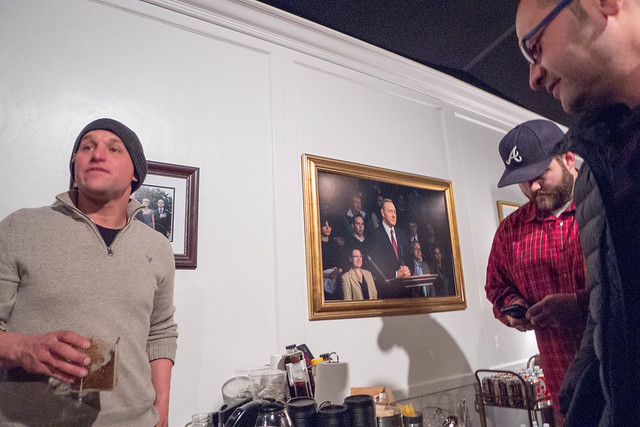 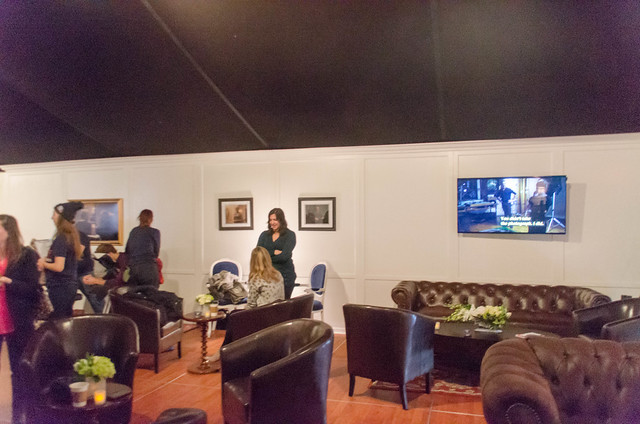 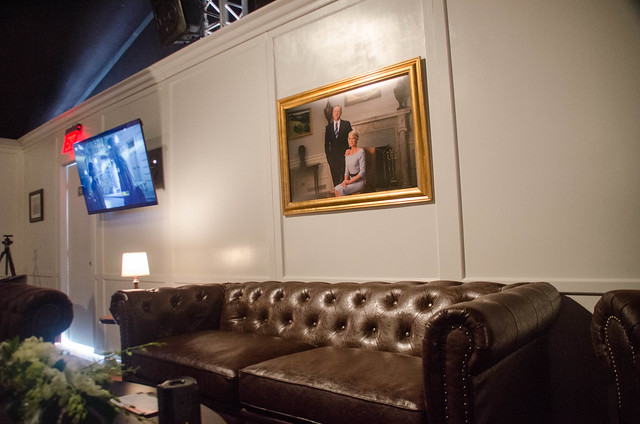 A large central bar dominated the room. Pastries were spread out on the counter. Over to the side two masseuses had chairs set up. Glynda signed up for a massage. I declined. 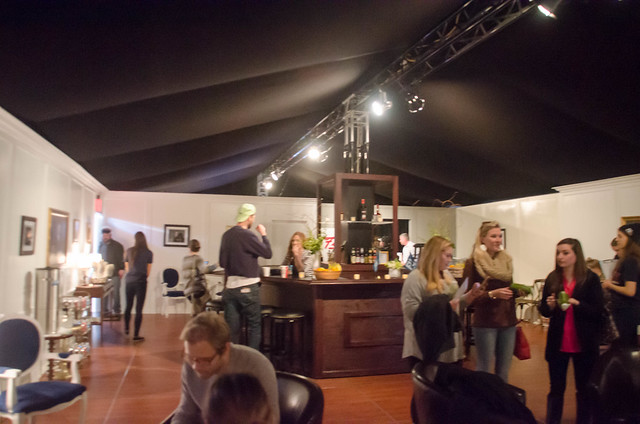 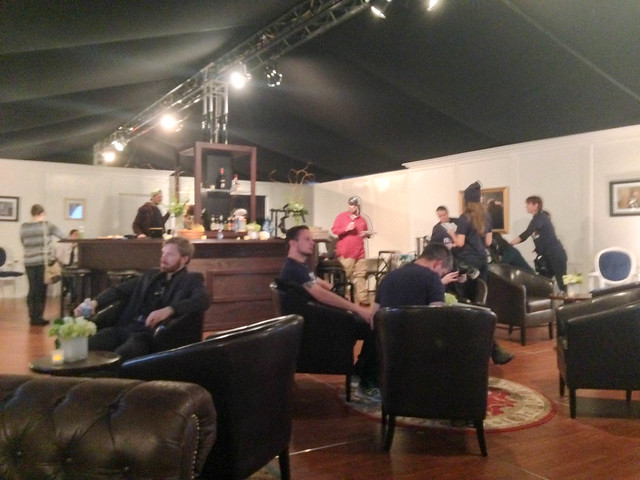 Tiger O’Rourke from Henry’s Smokehouse was set up in one corner as a stand-in for Freddy’s BBQ, Frank Underwood’s escape when he was a Congressman. They would be serving lunch throughout the day. Of course, we took advantage of that, as well. 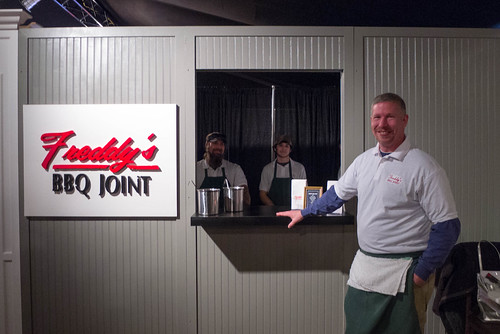 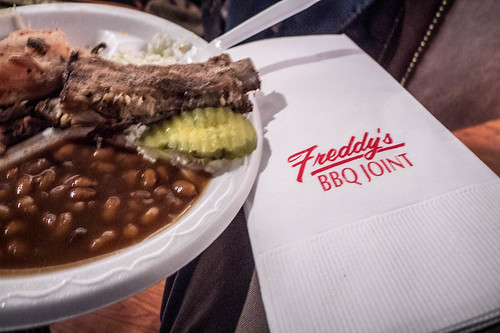 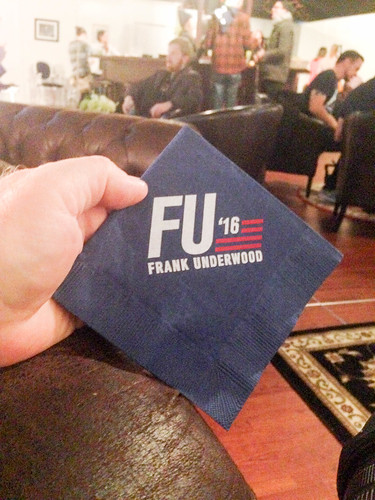 As we were getting ready to leave, we noticed another door. This led to a mock-up of the Oval Office. Apparently this was the only space available to the general public. The lines outside were waiting to have their photos made standing behind President Underwood’s desk. Since we were in the press area, we were ushered to the front of the line to have our photos made it was nice, but I felt bad for those folks that had been waiting. 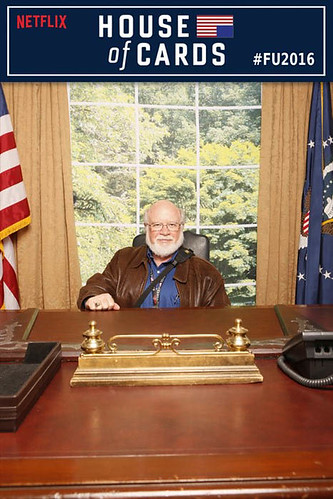 Chip put it in perspective for me. While it’s nice every once in awhile to feel like you’re part of the “elite” (even if it is with a fake press pass), this whole thing really is rather silly. Chip’s own company has been doing promotional campaigns like this on a regular basis. For example, in 2015 at the Super Bowl Chip designed a media wall made up of multiple phones and tablets from Verizon. When NFL VIPs walked past, the wall displayed stats and highlights of their NFL careers.

In this case, this event is solely to promote a television program. It has nothing to do with the debates or anything official. It’s run by event coordinators, with services contracted by local companies. The companies get paid by the number of patrons that come through, which, in turn, is used to evaluate the success of the event. In other words, the more people, the better the results. They don’t really care that my press pass was fake, and no one was really going to check up on me and make sure I was actually covering the debates. That being said, they can’t just let everyone in, or the line out front would turn into a chaotic free-for-all.

Even so, it was a lot of fun, and it felt great to be part of an elite, even if just for a bit.

While downtown, we walked along. Signs were out front of the Peace Center in preparation for the debates, and protesters were just getting ramped up. Of course, this was nothing like what it would be like later. 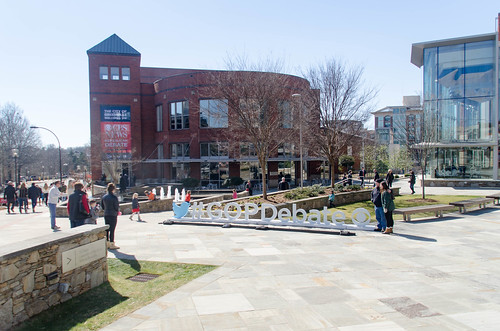 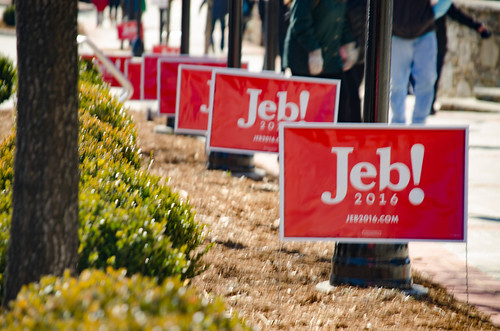 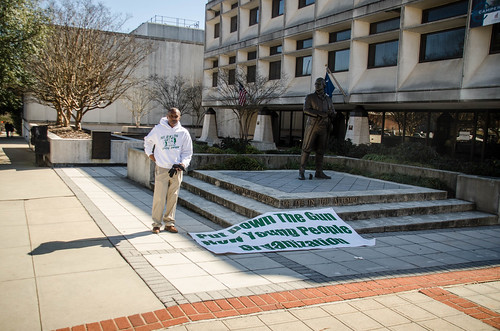 We walked down to the M. Judson Bookstore on the first floor of the old courthouse. Glynda had never visited, but I had dropped by once before. 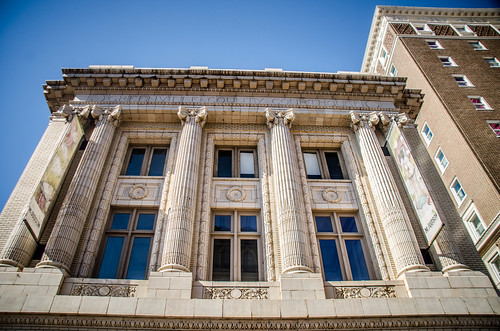 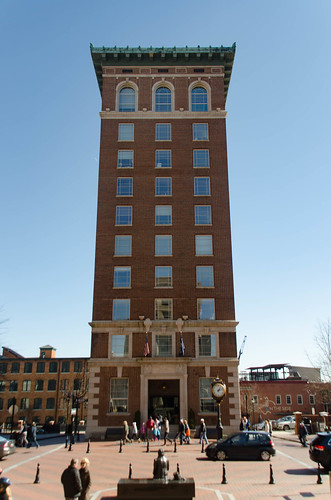 As we were leaving, a man sitting at a table in front of the bookstore commented on my camera, saying that I must be a professional photographer. Turns out that HE is a photojournalist. Kris is a photographer that specializes in American street photography for Indian publications. We chatted a bit about travel before heading on our way. 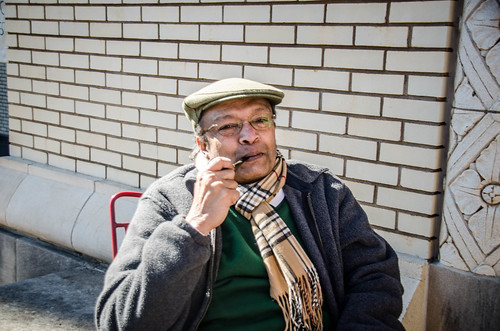 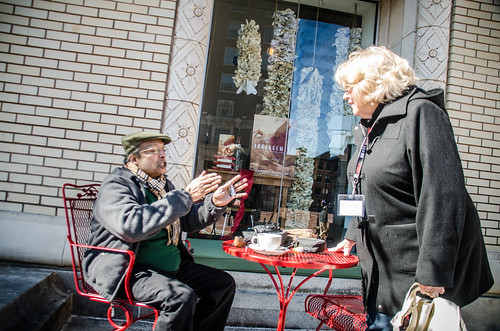 As we walked back past Frank’s place, the lines were getting even longer. It looked like it was time to head out and let the crazies have the town. Plus, my cold was getting the better of me. Time to head home and enjoy my bag of swag. 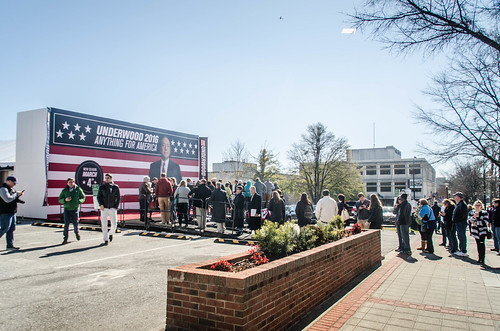 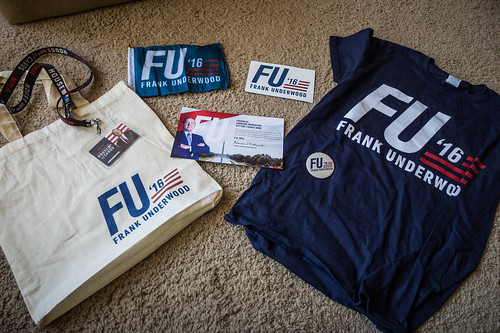 One thought on “Hanging with Frank in Greenville”