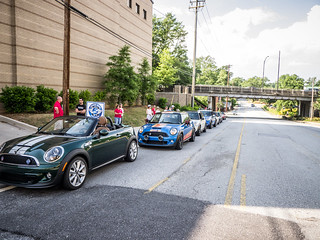 We introduced ourselves to the other Mini drivers (Minnie Driver??) and watched as other parade participants gathered. 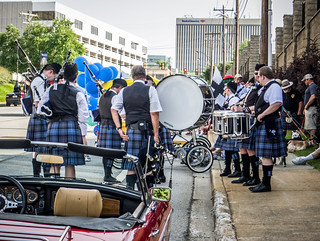 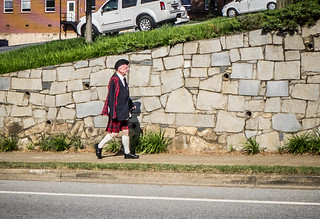 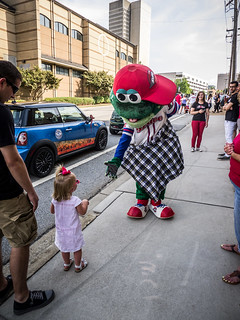 Jeff gave us some last minute instructions, and at about 5:45 we mounted up. I was wearing a Scottish sort-of hat and my Furman tartan tie. I didn’t have a kilt. 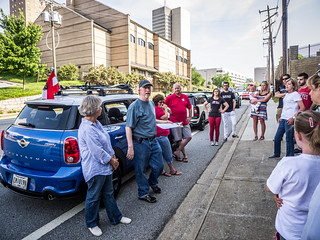 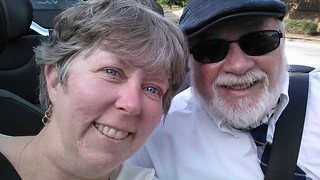 Using the suction cup attachment, I mounted the GoPro to the top of the windshield. That way we wouldn’t have to shoot video through a dirty windshield, but would get a clear view from above. 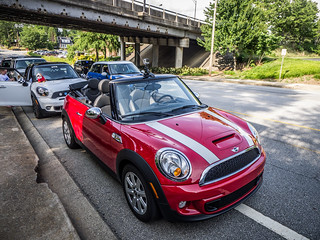 Soon enough we were setting out. We made our slow approach down Townes past streets that were blocked off. Traffic was backing up, and some motorists were NOT happy and started honking. At one intersection a brown Mini Countryman was the first car waiting. Laura and I waved them over to join us, and they did! I’m sure they will have a wild story to tell later that evening. 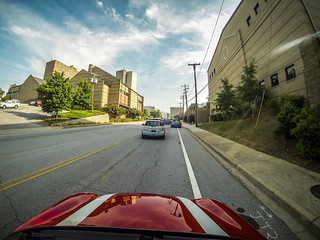 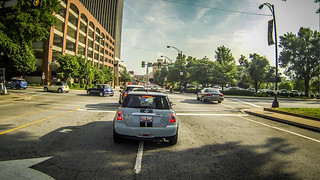 We turned onto West North Street, then onto Main Street, where the crowds were gathered. It was somewhat surreal. Hundreds of people were gathered on the streets waving at us, cheering, and taking our photos. 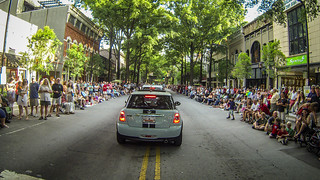 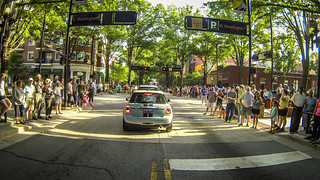 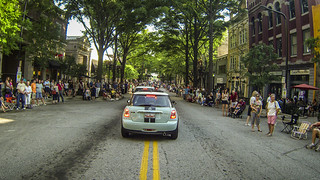 The crowds were great, but we were at the end of the parade. It was hot, and some folks were already leaving. However, there were still quite a few to cheer us on.

People really loved our little convertible. However, the comment I kept hearing from the crowd was, “They’ve got a GoPro!” The camera apparently was as popular as the car. 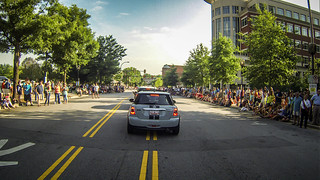 The parade continued down Main, past the Poinsett Hotel. Along the way I spotted several people I knew in the crowd. Glynda, Chip, Anna, and the kids were waiting for us in front of Soby’s, so we waived at them as we went by. That was right at the end of the route, just above the Peace Center. Our motorcade pulled onto the Reedy River Bridge, and it was over, taking just about 20 minutes to complete.

After the parade a group of us headed over to Fitzpatrick’s Irish Pub for dinner, drinks, and gear head camaraderie. Yeah, I know. We were in a (semi) British vehicle, had just participated in a Scottish Parade, and were now at an Irish Pub. It was still fun.

I put together a short video for YouTube. I didn’t use the entire 18 minutes of video, but select sections. The music is something I found on Archive.org, since we could just barely hear the pipes from our position in the parade.

One thought on “Great Scots Parade in a Mini Convertible”