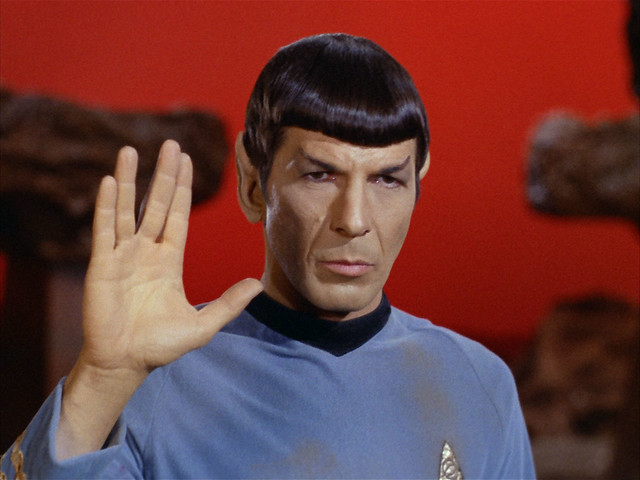 Yesterday the world learned of the death of Leonard Nimoy, Mr. Spock of Star Trek fame. As you might imagine, there has already been a tremendous amount of eulogizing about a beloved character, actor, and human being. I don’t intend to repeat that, or post yet another image of the funeral scene from Wrath of Khan. There will be plenty of reminiscing online to go around. I will, however, briefly speak of my own memories of the character.

I was/am a Trekkie. I was one of those that could give the title of the episode during the first few seconds of airing. I could speak the lines before they said them on TV. I was not, however, a Trekker – one who dons fake uniforms and attends conventions. That’s probably only from lack of opportunity.

I remember my family watching Star Trek during its first run. I, however, was rarely allowed to watch it because it came on after my bedtime. I do remember those rare opportunities to stay up and watch the show on our old black and white TV. Remember that this was long before videotape or DVR, so if you missed the broadcast, you missed the show. I had huge gaps in my Trek knowledge.

In elementary school we would play Star Trek on the playground. My friend Michael Starnes played the role of Captain Kirk, Scott Wallace was Engineer Scott, and I was Spock. We would spend our recess time pretending to beam down to weird planets, and that our fellow classmates were aliens. Yeah, I fit right in with my classmates. I don’t remember which of my friends played McCoy, but of those mentioned, Michael died tragically in a drowning, and Scott many years later in an auto accident.

By this time the show was in syndication. I was staying with my brother, Houston, in North Augusta one summer. His next door neighbor lived on a hill, so they were able to get an obscure TV signal that carried the reruns. I would go over every day at 2:00 to watch the show for three weeks. I was hooked.

I started to collect Star Trek memorabilia. I had a model phaser, communicator, and tricorder trio. I had the blueprints to the Enterprise, and I had the technical manual. I’d read “The Making of Star Trek” by Stephen Whitfield, and my knowledge of Trek Lore was increasing.

I along with everyone else on the planet who had an interest in the subject, was drawn to Spock. He seemed the most reasonable character in the series, as the rest of the show began to look sillier with age.

Leonard Nimoy, of course, and many other roles. Now it’s fun to go back and look at a very young Nimoy in “The Man from U.N.C.L.E.”, “Gunsmoke,” “Bonanza,” and other shows. Nimoy continued as “The Amazing Paris” in “Mission:Impossible”, but had a hard time finding non-Spock roles later. He would return to that role in “The Next Generation” and in the blasphemous reboot of Star Trek.

I could keep going, but I’ve not said anything new, or anything thousands won’t already post online. So, let’s just say, “Farewell, Spock.” May you find new adventures.