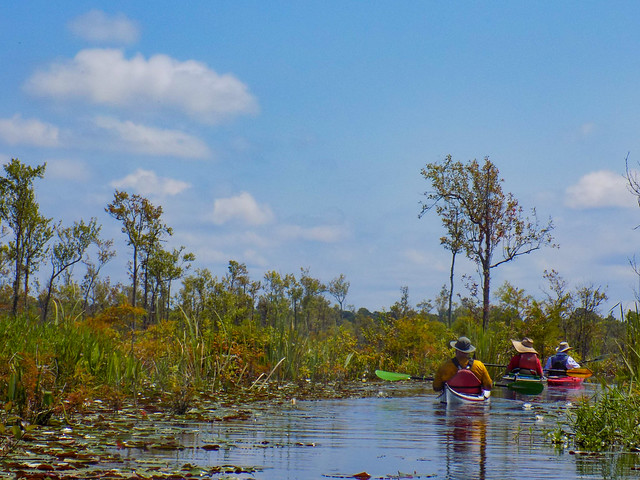 The Second Saturday of August meant time for another adventure with my friends from Lowcountry Unfiltered. Matt and I bounced a few ideas around before settling on The Jungle, a section of Lake Moultrie featured as part of the Berkeley County Blueways. It was a new venue for us, and turned out to be a hot, tiring trip, but one filled with stunning scenery.

I’ve previously written about the history of Lakes Marion and Moultrie and the Santee-Cooper Project. Both were constructed as part of a WPA project in the 1930s. The lakes are quite different. Lake Moultrie was logged and its basin cleared before inundation. Lake Marion’s construction was rushed to generate electricity for the war effort, so its basin was not cleared, leaving vast swamps like Sparkleberry and the ruins of Ferguson.

It wasn’t until this trip that I discovered another important difference between Marion and Moultrie, and this deals with the shapes of the lakes. Lake Moultrie is bowl-shaped, whereas Lake Marion more closely follows the Santee River’s watershed.

At first I thought this was just a random feature of the geography. However, I just learned that this was by design. The Lake Moultrie basin is quite shallow, so the WPA constructed a series of dikes to contain the lake. Otherwise, water from Lake Marion above would have just spilled out into the surrounding farmlands and swamps above the Pinopolis Dam, rather than forming a lake. It makes sense, but I had just never considered it. I’m sure, had Lake Marion’s construction not been rushed, it, too, would have containment dikes. Those dikes on Lake Moultrie would play a significant role in the day’s paddling adventure.

Even though Moultrie’s basin was cleared, there are still significant stands of cypress and tupelo along its shores. The Jungle is one such oasis. It is only a couple of miles south of the Amos Lee Gourdine Boat Ramp, so we could explore all day without ever getting too far from our take out. It looked like there were multiple routes through the area, so I marked them on our maps and uploaded them to my GPS. We were soon to discover that some of these routes were deceiving.

Eight of us met at the Gourdine Boat Ramp at 9:00. The ramp is located on the Rediversion Canal and has some nice facilities. There is a beach for swimming and two boat ramps. The main paved ramp launches into the Rediversion Canal. Another smaller ramp opens into a waterway along the eastern dike. We decided to use the main ramp for this trip.

Our plan was to duck into the Blackwater Canal that runs along the eastern dike. This way we could sneak into The Jungle without having to cross much open water. As we launch a light breeze pushed up some waves across the open lake. We paddled out, watching ospreys hunt fish in the shallow waters.

We entered the canal next to the dike. It was sheltered from the wind, but also offered shade from overhanging trees. As we paddled we speculated that the canal was created as dirt was pushed up to create the dike. At this point, though, we thought that this was a railroad bed rather than a dike.

We passed a couple of fishermen in the canal. So far the route was clear enough for a decent-sized motor boat. Sadly, though, that didn’t last. George Hancock and I were in the lead and we came upon an unexpected berm. It was a dead-end. This had not shown up the current Google Earth imagery or on any of our maps. We would have to retrace our steps and head back to the open lake.

Back out on the lake we rounded the western side of the island formed by the canal and the lake. This area is dotted with lone cypress trees, usually with an osprey nest on top. Alan Russell decided that these would make a good slalom course for his kayak.

We found the entrance to The Jungle and found the way guarded by a large alligator. He seemed fine with letting us pass without incident. I didn’t get an image of him, but Matt did.

We found ourselves in a wide area filled with waterlilies and lotus blossoms. While wide open, there was only one clear path through the fields unless we wanted to battle with vegetation. This really wasn’t a jungle. It’s more like the Okefenokee Swamp.

The lily fields seemed to stretch on forever, and the heat didn’t help. I was hoping that we could make it back to the canal and the respite of shade. We eventually made it to the opening to the canal, but it wasn’t the shaded passage we had paddled earlier. It was much wider and thick vegetation kept us away from the shaded banks. That didn’t stop us from pushing through one large tree for relief from the heat.

Since we had run into one dead end I didn’t really trust my map or GPS. However, we didn’t have many choices. We could backtrack or push on. We decided to push on through the canal. It was hot and arduous. Not only did the lilies snarl our paddles, but there were hidden floating mounds of vegetation similar to the “quaking earth” that gave its name to the Okefenokee. At first we tried to avoid the beautiful flowers, but after awhile we plowed through, just trying to make headway.

Sure enough, we hit another dead end that hadn’t shown up on the maps. At this point we decided to portage over the berm. It would also make a good stop for lunch.

Matt broke out The Most Photographed Stove in South Carolina™ and fired up the bratwurst and sauerkraut. Sadly, I couldn’t partake. I’d had dental surgery and was relegated to soft foods. My pasta and tuna was still quite tasty and refreshing.

We had thought that the dike was an old railroad bed. There was no evidence of a railroad, but there was a dirt road running along the dike. It turns out that this is part of the Lake Moultrie Passage of the Palmetto Trail. It had never been a railroad, but just incorporated the dike into the trail system.

Beyond the berm was another waterway – narrow, but navigable. Beyond that the passage opened up again with no more dead ends in sight. We figure that if we could get over this hump we should be fine. It turned out to be an easy launch into the channel. It was still hot and the breeze couldn’t reach us through the trees, so I broke out my little battery-powered fan. It helped as we slogged through more lily pads.

Eventually we reached a straight passage known as the Wire Fence Canal, which headed west toward the open lake. I tried to find some info about this canal, but with no luck. It was fairly wide, but shaded. The best part was that there was a wide area clear of vegetation. It felt good to be able to paddle and glide.

There were occasional breaks through the bordering trees. Beyond we could see more open fields with lily pads. No thank you. Been there, done that. We were read for open water. The canal seemed to stretch on forever, though, with cumulonimbus clouds building in the distance.

A cool breeze from the open water did bring some relief, but we were tired. The next stop on our itinerary was Raccoon Island where I had spotted a nice beach in Google Earth. We thought it would be a nice place to kick back and relax.

Apparently so did lots other people. The small cove was lined with pontoon boats and motor boats. We were able to claim our own little piece of beach and wade into the shallow lake water to cool down a bit.

We could have just hung out there for hours, but the afternoon was getting away from us. Time to head back. We took the most direct route. We were about 2.5 miles from the landing. It seemed to take forever to get there, though. Instead of paddling around to the boat ramp we just pulled up at the swimming beach.

Even though The Jungle is only a couple of miles from the boat ramp, we managed to paddle 9.68 miles, according to my GPS. The backtracking and slog through vegetation on a hot day made the trip feel even longer.

As tough as the trip was, it was still a great adventure. The scenery was incredible. I’d like to come back, but on a much, much cooler day.