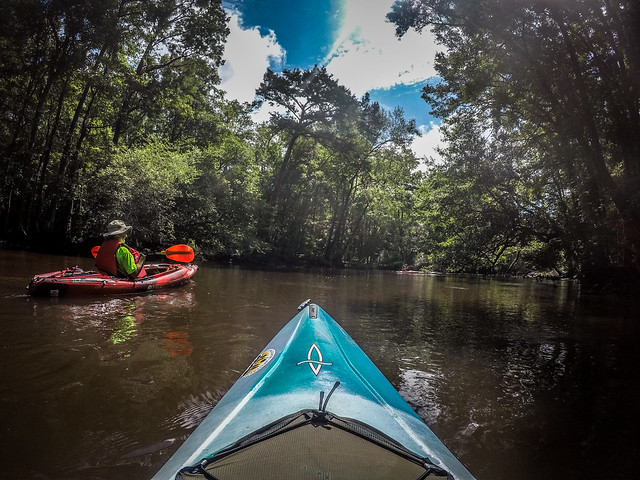 The Bamberg Chamber of Commerce has been sponsoring trips on the Edisto River the first Saturday of each month.  I joined them back in April for a section from Zig-Zag Landing down to Whetstone Landing.  This month they were paddling from Bobcat Landing on the South Edisto down to Brabham Landing.  It was a new stretch of the river for me, so I join about 50 other paddlers to check out this part of the Edisto.

My Greenville Chorale colleague, Dale Strickland, was the one who got me hooked up with the Bamberg group.  He has family in the area that he joins for these outings.  However, just as I was getting ready to head down for the trip. I got an e-mail from him saying that he couldn’t make it.  I would be on my own.

Bobcat Landing is where Highway 301 crosses the South Edisto.  It’s a well-developed landing just upstream from the twin bridges of the four-lane highway.  I arrived early, but the organizers were already there.  I checked in, got my poker chip, and unloaded my kayak and gear.

The Chamber provided a shuttle down to the take-out.  I parked my truck and rode back to the put-in with them.  Lots of other paddlers had arrived, including my friend Hugo Kryspin, who would be taking over duties as Edisto Riverkeeper.

I was in one of the first groups to head out.  It was a bit odd, though.  Even with fifty paddlers I felt alone.  Groups that arrived together tended to stick together.  I didn’t mind paddling by myself, but it just seemed strange to be so along with so many people around.

The river was much like other stretches of the Edisto that I’ve paddled.  It is a twisting route lined with cypress, tupelo, and willows.  It wasn’t as bad as the section of the South Edisto that we paddled through Aiken State Park, but there were still some downed trees.

There was one group of three paddlers in front of me.  One of the paddlers seemed to have knowledge of the river, so I followed them to see where the best routes might be.  It also helped to see where they ran into trouble and how I might avoid it.  There were a couple of places where we had to portage.

We started chatting and pulled up to a sandbar for a brief respite.  It was good to have some company on the river. They asked where I was from, and when I said I was from Greenville they said they had family in Greer.  I said that my fellow paddler had stood me up, and they said that they also had one of their party that couldn’t make it today.

As we got further down the river it dawned on me.  I asked one of them, “Your family in Greer…that wouldn’t happened to be Dale Strickland, would it?”  It was.  I was paddling with Dale’s in-laws who live on that stretch of the river, Kirk, Billy, and Joyce.  Cool.

Kirk and Billy were looking for snakes, and we found a few sunning themselves on the branches that had fallen into the river.  Most of these were non-venomous brown water snakes.  I think I stopped counting when we got to five.  There was other wildlife on the river – woodpeckers, kingfishers, and herons.

Billy played tour guide as we continued downstream.  He pointed out friends’ farms and even pointed out the house where he had grown up.  The river wasn’t especially challenging, but I felt better being with someone who knew it so thoroughly.

The trip went fairly quickly.  We pulled up to Brabham Landing and loaded our gear into our vehicles.  Joyce invited me to join them for lunch in Bamberg at Rusty and Paula’s, a local cafe.  It was an excellent country cooking buffet, and I ate far too much.

The entire trip was about six and a half miles. We took about three hours paddling, which was pretty good timing considering that we had to hop over logs and do some portaging.

As usual, I did make a time-lapse. The link below will take you to it…

While I enjoyed meeting and talking with Dale’s relatives, they were more interested in getting to the end of the route.  I saw some of Hugo Kryspin’s photos and the group he was with hung out on sandbars and did some swimming, more like our Lowcountry Unfiltered trips.  It made me wish I’d hung back a bit and joined the party crowd.

Regardless, it was another good trip on the Edisto and I was happy to add another stretch to my paddle resume.