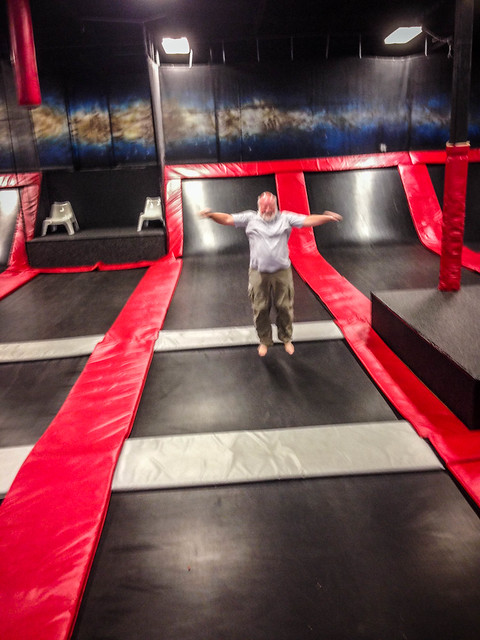 Anna has been trying to get me to go trampolining with her and Ethan. This morning I didn’t have any pressing duties or appointments, so I decided to go. We spent a fun hour with an intense workout at Gravitopia.

Gravitopia is located off of Butler Road, near the dreaded part of Woodruff Road that I never visit. It’s in a large complex. I was surprised at how much space it takes up. 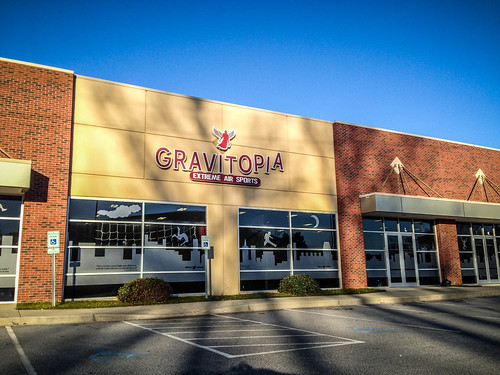 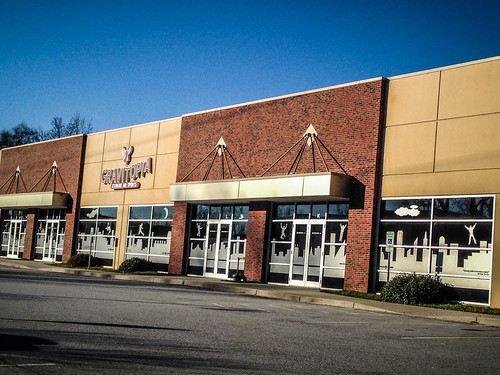 Monday through Friday is kids only from 9:00 until 10:00. Our times were from 9:30 until 10:30, so I could sneak in. On this cold Tuesday morning there were very few people jumping – only one other mother with a couple of kids.

I signed my waiver, then got my bracelet certifying that I was OK to jump for one hour. Anna and Ethan were regulars, so they ready to go quickly. 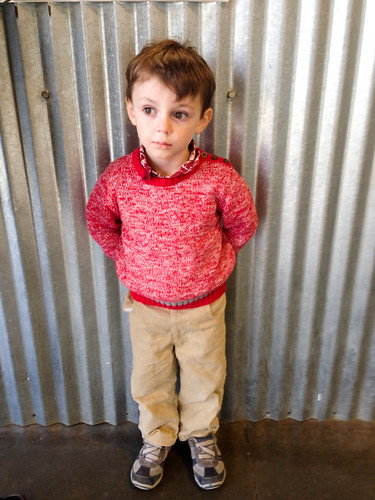 Next up, I had to remove everything from pockets and take off my shoes and socks. They only allow bare feet or their own grippy socks. They don’t want anyone to bring in their own socks that might slip. Barefoot was OK with me.

While Anna and Ethan removed shoes, etc., I decided to explore. The main space has rows of trampolines in a 10X3 grid. The trampolines next to the wall are angled upward for doing stunts. Dangling high overhead were targets, if you were brave enough. 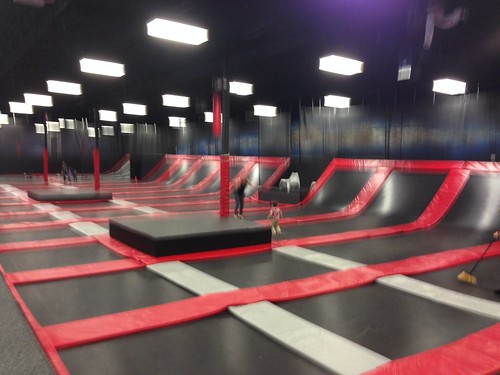 There were also several foam pits. Some of these were just foam, with a trampoline to launch. Some had ramps where you could get a running start for flips, etc.. One had punching bags and a balance beam, and one had a slack line balance rope. Another larger foam pit had a trapeze and launch tower. 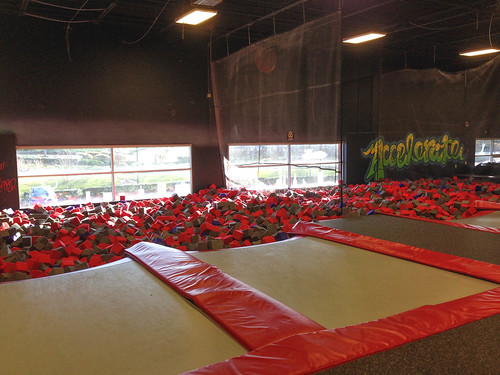 Anna and Ethan got started on the main tramp floor. As a lightweight four year old Ethan could run across the surfaces without making much of an impact. 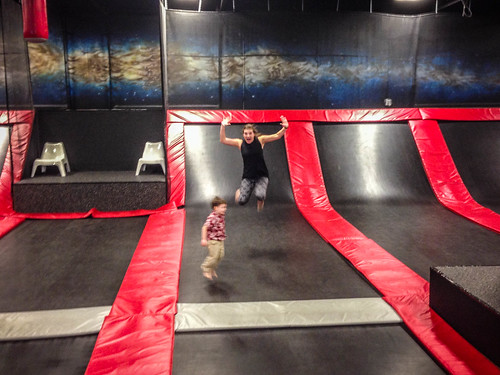 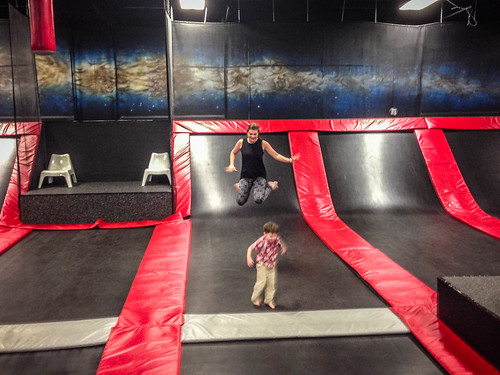 I observed for a moment, then jumped in…literally. I honestly don’t know if I’d ever been on a real trampoline or not. I bounced tentatively, then with more confidence. I bounced higher and higher, and was having an absolute blast. 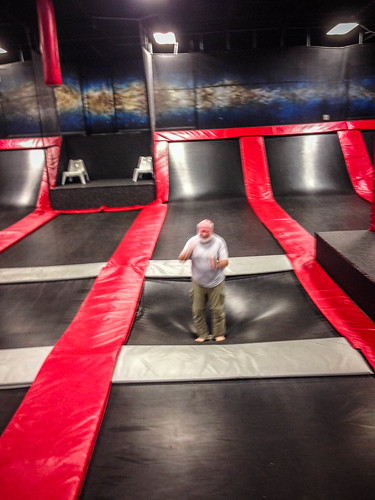 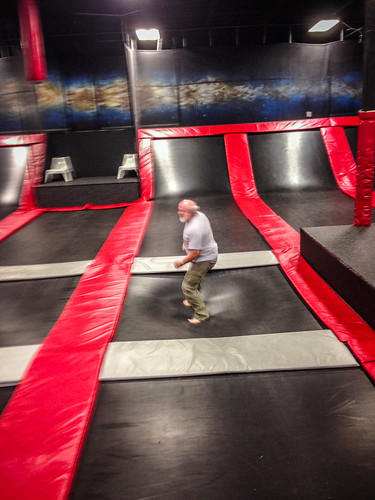 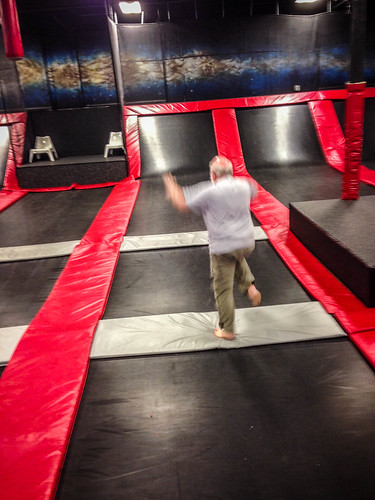 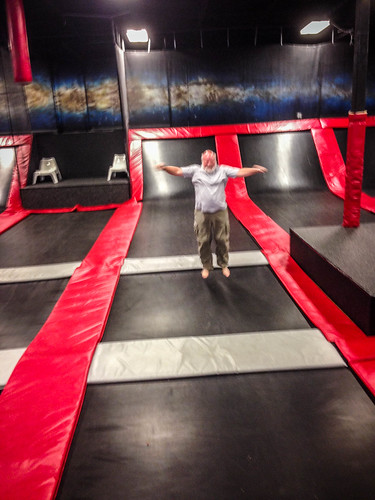 It was a great workout, and soon I was winded. Ethan decided he wanted to try the trapeze. He dropped pretty much straight into the foam pit. I got a bit of video… 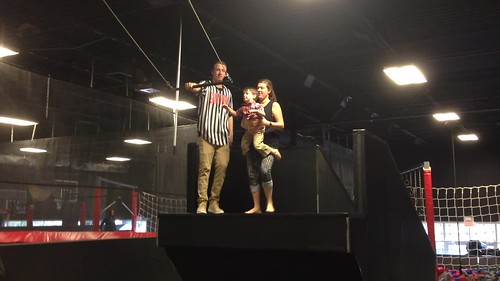 From there we tried some of the other foam pits, starting with the slack line. Ethan made it part way across then jumped in. He enjoyed burying himself in the foam so that he couldn’t be seen at all. 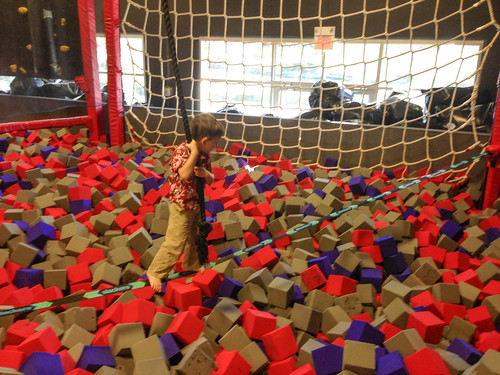 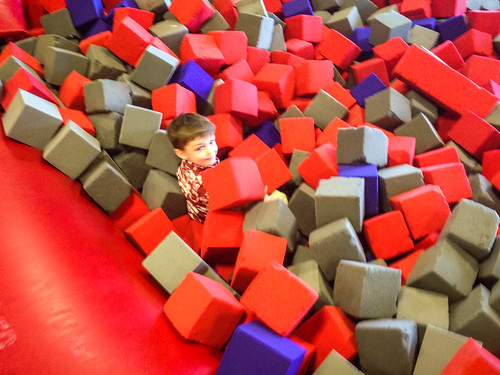 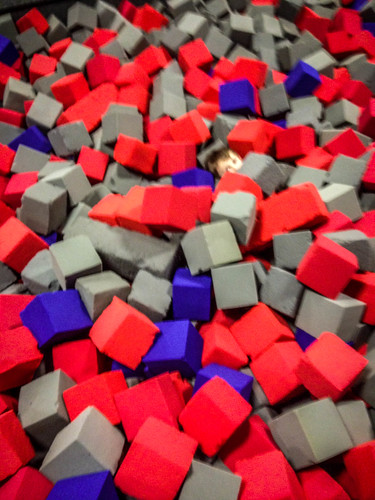 I decided to give the slack line a try. With the assistance of the hanging rope I made it almost all the way across. I think I could have made it further, but I decided to jump in. Big mistake. Getting out of the foam pit was the most exhausting part of the whole morning. I knew the problems before jumping in, so I had a strategy in mind. Even so, it was a challenge.

I had also been warned that foam pits and ball pits = disease pits. Anna assured me that Gravitopia launders their foam on a regular basis so that it’s clean. Since we were early in the morning, I didn’t think much crud would have built up.

Ethan bounced from one activity to another. He raced over to the dodge ball pit and challenged his mom. I bounced with them some more. 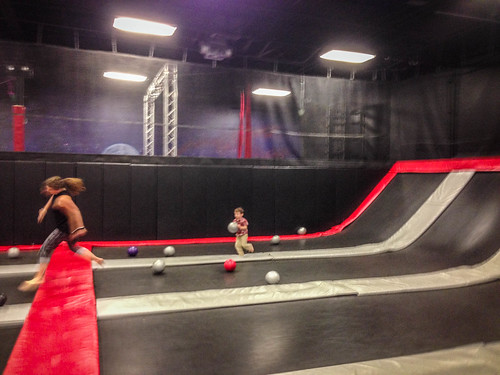 I did some more out on the main floor, then Ethan and I gave the basketball hoops a try. I didn’t try slam dunking. I still wasn’t that confident.

I kept my iPhone nearby, but never jumped with it. In addition to these shots, I got some video. Here’s Anna jumping while Ethan hides from the camera. 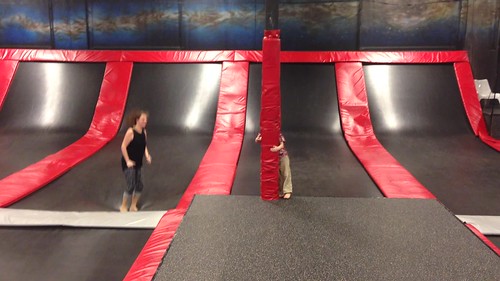 I held the camera while bouncing for a bit. 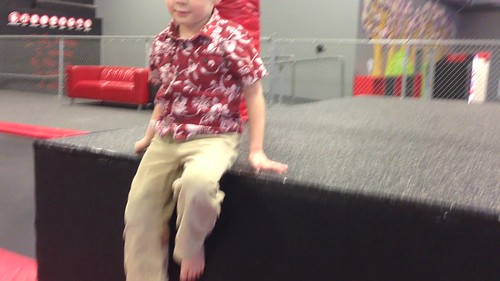 Anna got a short video of Ethan and me bouncing together. 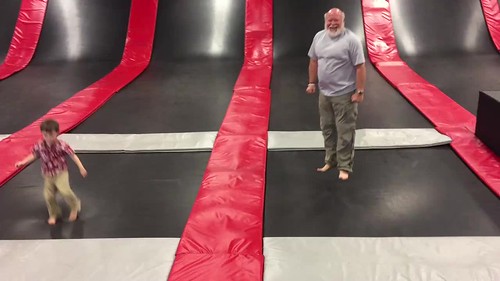 Before we knew it our hour was up. I had only fallen three times, and my only injury was a small rug burn on my elbow. Anna said that dislocated knees are common among adults. Given my poor joints, I was glad I took it easy. Even so, later in the day I felt my bad knee buckle a couple of times when I took a step.

Despite the occasional fall, it was a great experience, and quite a workout. If this place were closer I’d end my membership at Planet Fitness and come over here. It’s much more fun. Or, maybe I could convince Planet Fitness to add trampolines. Somehow I don’t think that’s going to happen.