This year I’ve been playing the guitar more than I have in decades. It was easy to reach back into the depths of memory and bring back that riff from Secret Agent Man. I found the chords for the Johnny Rivers version online and started playing and singing it with that signature riff. Yet, I wanted to know more about the television show that had sparked this interest.

Danger Man was a British ITC production starring Patrick McGoohan as Agent John Drake. The series came out in 1960, before Sean Connery made his debut as James Bond in Dr. No. Danger Man only ran from 1960-1962, but with the popularity of the James Bond films and the spy genre in general, it was brought back in 1964 to compete with US productions such as “The Man from U.N.C.L.E.” and “I, Spy.” The 1964 revival was renamed “Secret Agent” for US audiences and given the Johnny Rivers theme song, written specifically for the show.

This was also the Age of the Neo-Harpsichord. The instrument had seen a resurgence in popular music in songs like “Mambo Italiano” and the theme from the Addams Family. The original theme music for Danger Man was also in this style. While the US version used the Johnny Rivers theme, it kept the original harpsichord theme composed by Edwin Astley for the credits at the beginning of the show. Listen for both in this clip. I also love the Westinghouse Range commercial after the credits.

Even though the series capitalized on the popularity of James Bond, the character of John Drake was quite different. According to Wikipedia…

Unlike the James Bond films, Danger Man strove for realism, dramatising credible Cold War tensions. In the second series, Drake is an undercover agent of the British external intelligence agency. As in the earlier series, Drake finds himself in danger with not always happy outcomes; sometimes duty forces him to decisions which lead to good people suffering unfair consequences. Drake doesn’t always do what his masters tell him.

Drake is rarely armed, though he engaged in fist fights, and the gadgets he uses are generally credible. In one episode (To Our Best Friend), Drake says; ‘I never carry a gun. They’re noisy, and they hurt people. Besides, I manage very well without.’…

As Drake gets involved in a case, things are rarely as they seem. He is not infallible — he gets arrested, he makes mistakes, equipment fails, careful plans do not work; Drake often has to improvise an alternative plan. Sometimes investigation fails and he simply does something provocative to crack open the case. People he trusts can turn out to be untrustworthy or incompetent; he finds unexpected allies.

Danger Man/Secret Agent ran for three more seasons until 1967. McGoohan resigned from the role to begin another project. This project, The Prisoner, featured McGoohan as producer, writer, and actor in the title role. The premise of The Prisoner is that a government agent tries to resign, but is abducted and imprisoned in a strange village. It would seem that The Prisoner is a continuation of Danger Man – same actor, the agent’s name is never given, and many of the same writers and cast carry over between the two. As Prisoner Number 6, McGoohan’s exclamation, “I am not a number!” is the embodiment of the line from the Secret Agent song. “They’ve given you a number and taken away your name.” Even the sets for the pilot episode of Danger Man, “View from a Villa”, were reused as the village in The Prisoner. However, in a 1985 interview McGoohan stated emphatically that the two were different and that he wished that another actor had taken the role of Number 6.

Here is the opening sequence for The Prisoner, where the agent resigns, then finds himself gassed and abducted.

Back to the music…

The Johnny Rivers theme was a hit. As such, it was covered by many other performers. With its surf guitar riffs it was natural that The Ventures would take a stab at it, with Josie Cotton on vocals.

There was a somewhat more mellow version by Mel Torme’, with orchestral accompaniment.

My favorite cover was by DEVO, with some interesting variations and additional lyrics. Here’s a rather fast live performance.

For me, the best is the original, as sung by John Ramistella, aka Johnny Rivers himself. The TV show only uses a short clip. Here’s the whole song.

At last night’s Bring Your Own Guitar at Empire Ale in Mount Vernon I started playing the Secret Agent Man riff, then several others joined me on the song. Later in the session I taught it to the rest of the group and we played it. It was a blast. Here’s a PDF of the version that we used. It doesn’t have the riff, but just lyrics and chords.

It’s loads of fun to sing and play. Maybe one day I’ll work out those other surf guitar licks and try this on an electric guitar. 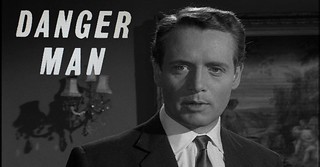