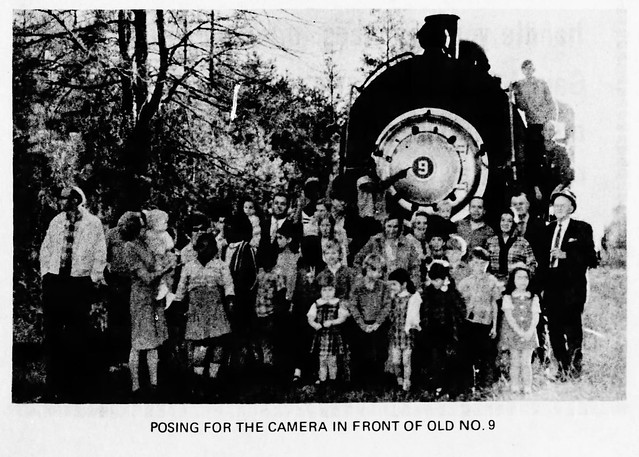 The Swamp Rabbit Railroad through Cherokee County ran from Blacksburg to Gaffney by way of Cherokee Falls. Built by the Ohio River and Charleston Railroad, it was meant to compete with the Southern Railroad line that ran straight to Gaffney. The idea was that the ORC would service the textile mills along the Broad and Pacolet Rivers directly, without the need for spur lines. Only the 10.2 mile stretch through Cherokee County was completed.

The railroad struggled, and fell into disuse after only a few years. By the 1940s the trestle across the Broad River was gone, and by 1967, the rails were abandoned, but left intact from Blacksburg to Cherokee Falls.

That 1967 date is important for the timing of this story. At that time, two counties away, another Swamp Rabbit was seeing new life. Entrepreneur Harry Stuart had developed the Echo Valley theme park in northern Greenville County, which featured the old Swamp Rabbit Railroad that had run along the Greenville and Northern line. Jean Vaughan Cannon was superintendent of the park, and occasionally served as engineer on the park’s two steam engines.

Echo Valley had two steam locomotives. The workhorse was the old Cliffside 110, a light industrial 2-6-2 engine. The engine was built in 1927 and served as a logging train engine until it eventually wound up at Cliffside Mills in North Carolina. In 1963 the engine was sold to the Echo Valley Park. After Echo Valley closed, Cliffside 110 ran at Stone Mountain, Georgia, before being sold to the New Hope Valley scenic railroad in 2013. 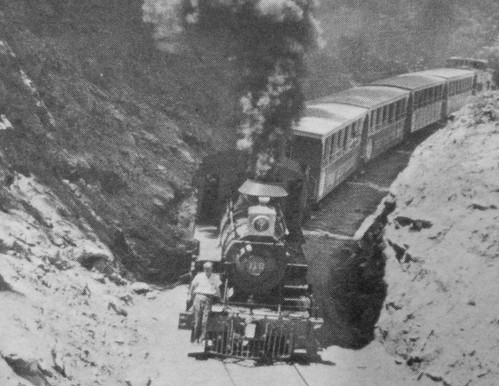 The second engine, Porter #9, was an even smaller 0-4-0 saddle tank engine. A saddle tank has a somewhat unusual appearance. The reserve tank sits above the boiler, like a saddle. Usually it doesn’t have a tender with extra water or fuel. It can’t pull as much weight, but since it’s self-contained, it’s ideal for utility work. Here’s a shot of the engine from the Carolina rails website. The date would indicated that the photo was taken before restoration for use at Echo Valley. 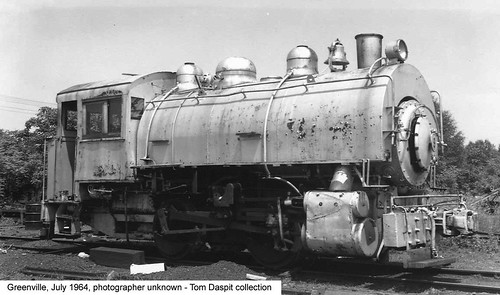 Built in 1942 by the H. K. Porter Company the #9 engine saw use at the Old Dominion Iron and Steel Company before coming to Echo Valley. At the park it was used as a utility engine, as well as a back-up to the main #110 engine. It’s important to note that both the Cliffside #110 and the Porter #9 were never used as part of the main service on the Greenville and Northern. They were only used as part of the Swamp Rabbit scenic railroad through Echo Valley.

In 1968 Echo Valley ceased operations, and J. V. Cannon saw an opportunity. He purchased the Porter #9 engine as well as the rolling stock from the defunct park. The rolling stock consisted of cabooses that had been converted into open-air passenger cars. In May of 1970 he approached the Cherokee Heritage and Preservation Society (CHAPS) about a proposal to turn the Blacksburg to Cherokee Falls portion of the Swamp Rabbit into a scenic railroad, similar to the Swamp Rabbit at Echo Valley. 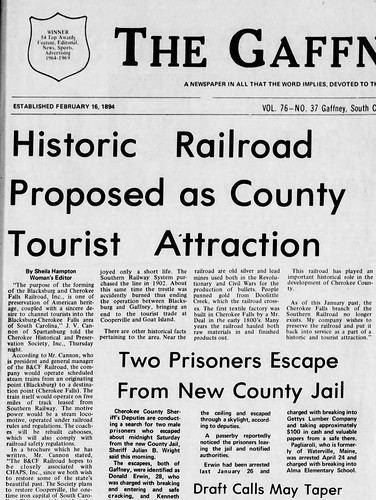 Cannon had grand plans for his railroad. He hoped to restore the trestle across Goat Island on the Broad River. Goat Island had been known as Cherokee Park, a favorite picnic and gathering spot for locals. When the trestle burned easy access was shut off to Goat Island, so it fell out of use. Cannon’s plan was to redevelop the island as a theme park, similar to Echo Valley. However, he wasn’t going to stop there. He also planned to redevelop the old Coopersville Iron Works as a tourist attraction on the other side of the river.

By August of that year construction of the revitalized Blacksburg and Cherokee Falls Scenic Railroad held its groundbreaking at Cherokee Falls.

The Blacksburg and Cherokee Falls Line operated for about a year. Advertisements ran in the local paper. Even these ads spoke of future plans on Goat Island.

Tim Linder, a fellow school IT specialist and friend from the area, said that he road the train as a child.

I remember riding on the one near Blacksburg!! Seems you boarded it in the middle of nowhere from a gravel parking lot. You rode down the track for several miles (maybe) and then they just put it in reverse and you backed all the way back to the lot.

It’s interesting to note that even though the railroad had been known as the “Swamp Rabbit”, and the Porter #9 engine and rolling stock had come from a different “Swamp Rabbit”, Cannon always referred to his railroad as the “Blacksburg and Cherokee”. Perhaps he thought that the name “Swamp Rabbit” was jinxed. Whatever the case, the endeavor lasted only a year. The railroad declared bankruptcy and the assets put up for sale. Looks like nature also had a hand in the railroad’s problems.

“You might say we were keeping our heads above water,” said J. V. Cannon of Spartanburg, president of the corporation which was operating the road, “until the water rose seven feet over the tracks” during a cloudburst last fall. Trestles were washed out and dropped 60 feet into Doolittle Creek, and 200 feet of track were under water. 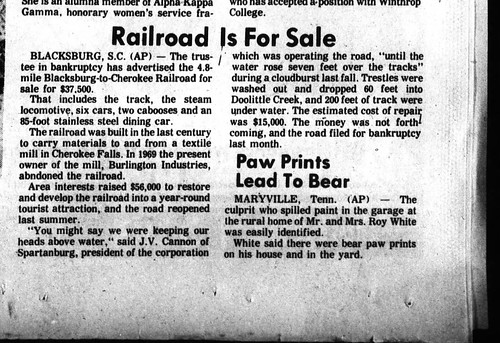 The items for sale included the engine, converted cabooses, and a dining car. This photo from the Gaffney Ledger shows the cars sidelined prior to the sale. Note that the caboose has “B&CE RR” roughly stenciled on the side. While at Echo Valley, these cars had the words “Swamp Rabbit” painted on the side. 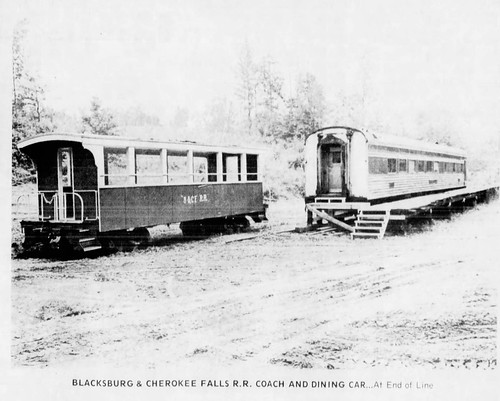 By 1972 the tracks were being removed. 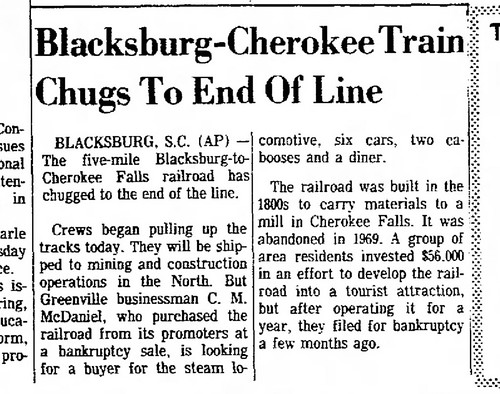 The right of way for the railroad was released, and was taken over by power lines, gas lines, and kudzu. It would seem to be the end of the Swamp Rabbit Railroad.

However, it wasn’t the end of J. V. Cannon, nor the engine and rolling stock from the Swamp Rabbit(s). Porter #9 did a brief stint at the Yancey RR in Burnsville, North Carolina. This photo of the #9 sitting on the siding at Burnesville was taken in 1977 by Photobucket (and rail enthusiast) user “SHAGRR”, aka “Beach Bill.” (NOTE – Bill Althoff of North Myrtle Beach confirmed that he is the photographer.) 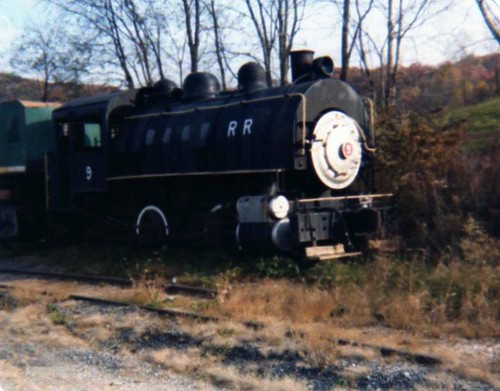 The rolling stock and engine eventually wound up at the Denton Farm Park as part of the Handy Dandy Railroad. The old Porter #9 underwent complete cosmetic surgery, and looks nothing like it did in its previous incarnations. The saddle tank was removed and the boiler was converted from an oil-fired furnace to coal. The engine now required a tender. Other cosmetic changes were made to make it look like an “authentic” steam engine.

This photo by Nick McClean appears on the RailPictures.net website, and shows the Porter #9 after cosmetic surgery. At least they kept the #9 on the front of the engine. 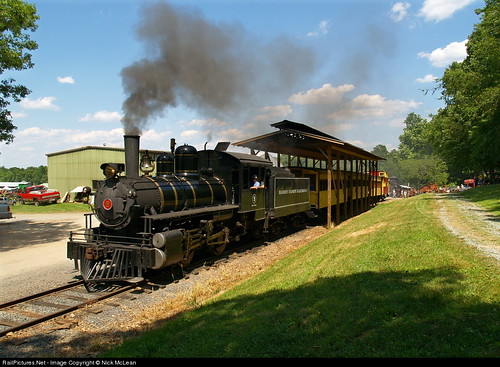 Here’s a recent video of the steam engine and rolling stock in action at Denton.

As for J. V. Cannon, his obsession with trains didn’t end with the Swamp Rabbit or the B&CE. Cannon was responsible for rebuilding the steam train “George” for the Pavilion in Greenville in 2002, and rebuilt the steam train “Sparky” for Cleveland Park in Spartanburg in 2003. Jean Vaughan Cannon passed away July 4, 2006 at the age of 67, after a lifetime of restoring and operating trains.

I did reach out to William Cannon, J. V. Cannon’s son, via e-mail. He was the one who had left the initial comment on this website. As of this publication date I hadn’t heard back from him. If he does respond, I will update this post with his comments.

…and so ends the saga of the Swamp Rabbit Railroad, both from Greenville and through Cherokee County. Having studied the history of this third Swamp rabbit railroad, there was only one thing left to do – see if any remnant was left of the old railroad. That would require a bit of ground truthing. 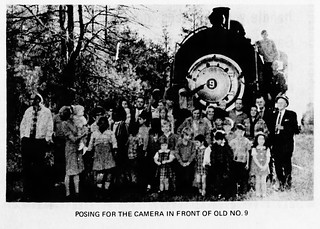 One thought on “Chasing a THIRD Swamp Rabbit – Part 2, J. V. Cannon and the Scenic Railway”