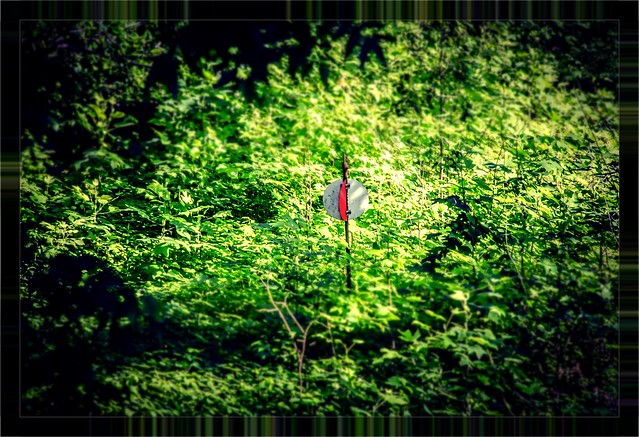 I stumbled on this third Swamp Rabbit by accident. I was searching Chronicling America for references to the railroad in the lower part of the state. I came across this brief article in a 1912 edition of the Yorkville Enquirer. 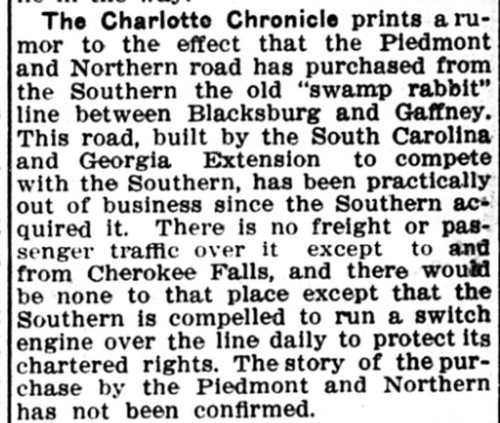 The Charlotte Chronicle prints a rumor to the effect that the Piedmont and Northern Railroad has purchased from the Southern the old “swamp rabbit” line between Blacksburg and Gaffney. This road, built by the South Carolina and Georgia Extension to compete with the Southern, has been practically out of business since the Southern acquired it. There is no freight or passenger traffic over it except to and from Cherokee Falls, and there would be none to that place except that the Southern is compelled to run a switch engine over the line daily to protect its chartered rights. The story of the purchase by the Piedmont and Northern has not been confirmed.

I made a note of the article with locations, then put it on a back burner until I finished with the second railroad. When I had a chance to dive into the research, I found that this Swamp Rabbit actually had several incarnations, and there was much more available about this railroad than the previous one I had studied. The history is somewhat confusing and contradictory, but here’s what I was able to find out…

In the late 1800s the Southern Railroad operated a railroad between Blacksburg and Gaffney. The Ohio River and Charleston company was chartered in South Carolina in 1894, specifically to develop a competing line that would also serve the mills along the Broad River at Cherokee Falls.

The earliest mention of the Blacksburg, Cherokee Falls, Gaffney Line was in the Engineering News and Railway Journal in 1896:

SOUTH CAROLINA A new road will be built in the cotton mill belt of South Carolina from Blacksburg to Cherokee Falls to Gaffney Cowpens and Pacolit [sic] etc for the primary object of handling the freight business of a dozen or more cotton mills located near Spartenburg [sic] Clifton Mills etc where freight business now amounts to over a half million dollars annually Our correspondent writes that the plans have not yet assumed tangible shape.

It seems the plans were to make this a “textile railroad,” or, at least, that was the speculation.

The January 1897 edition of Railway News made this announcement of the new railroad: 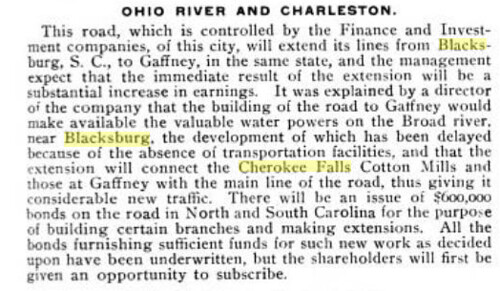 In August of 1897 another announcement was made in the Engineering News and American Journal, this time with details closer to actuality, but stating that it will also continue to Clinton. 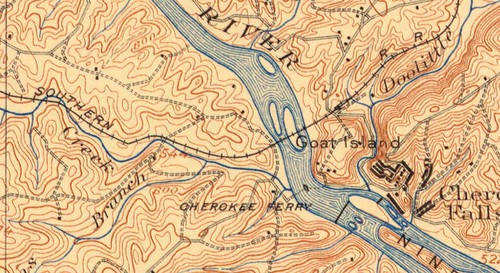 Note that this map lists the route as “Southern Railroad.” At some point between 1897 and 1909 the Southern acquired both routes, but here’s where things get confusing. As late as 1911 the Annual Report of the Railroad Commissioner of the State of South Carolina has passenger service listed to all three towns.

Yet, the 1912 Yorkville Enquirer article at the top of this post states that the railroad “…has been practically out of business…” and, “There is no freight or passenger traffic over it except to and from Cherokee Falls.” The line was redundant to the main Southern Railroad, and apparently not able to carry as much traffic.

In December of 1906 the Charlotte Observer described a major accident on the main Southern Railroad Blacksburg-Gaffney line. Rail traffic was temporarily shunted onto the Cherokee Falls loop until repairs could be made.

With the exception of southbound train No. 11, no train has passed since noon. Train No. 11 was brought via a branch railroad called the “Swamp Rabbit” from Blacksburg to Gaffney to-night [sic]. Heavy Pullman cars cannot go over this small track, hence No. 33, the northbound vestibule and No. 37, southbound, remain at Gaffney and Blacksburg, respectively, until to-morrow [sic].

The Swamp Rabbit wasn’t without problems, itself. The many trestles over Peoples Creek and Doolittle Creek were subject to washouts with heavy rains, as reported in 1909 and 1911 in the Gaffney Ledger. 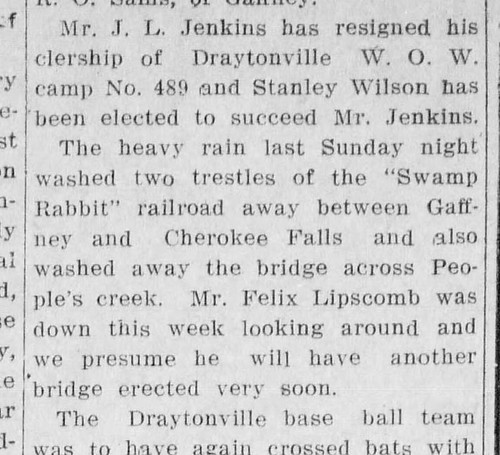 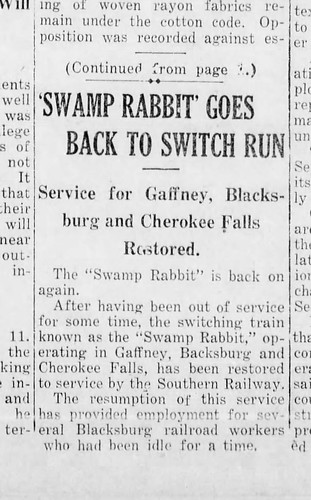 The 1920s were a rough time for the already struggling railroad. Several articles in the Gaffney Ledger and Cherokee Times make mention of arrests in the “Panhandle” region near Blacksburg, along the railroad. Most of these were for either public drunkenness in a time of Prohibition, or for gambling. 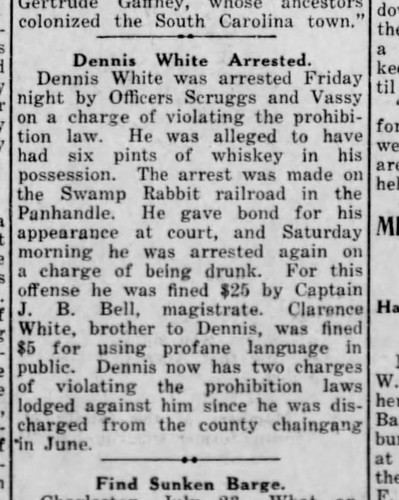 By the end of 1927 it appears that the railroad was completely out of business. The Gaffney Ledger reports that the county’s tax evaluation took a blow because the railroad had been placed on the “Non-Operative” list. 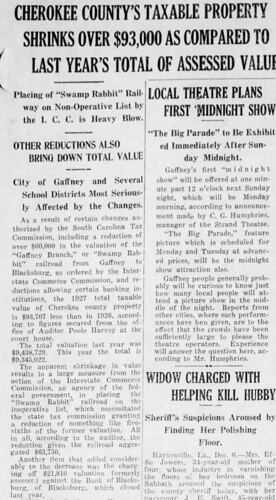 According to the Carolina Rails website, the trestle across the Broad River at Goat Island burned in the 1940s, and the rails on the west side of the river were abandoned and removed up to Gaffney. The stretch from Cherokee Falls to Blacksburg was left intact. All that remains of the trestle are the stone supports on either side of the island. 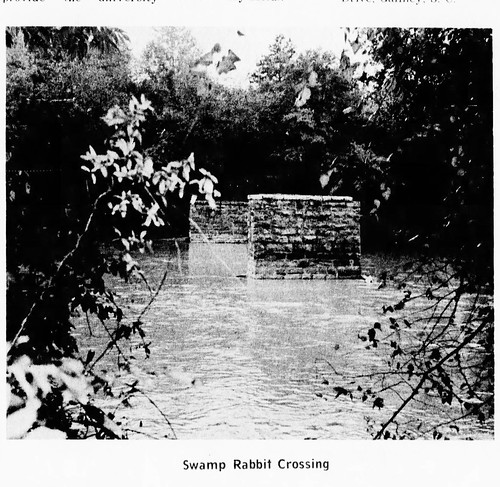 Speaking of the trestle, Goat Island was a popular picnic spot known as “Cherokee Park”, even before the coming of the railroad. Groups would take boats known as “bateaus” across to the island. The trestle was featured a pedestrian walkway and stairs that led down to the island. I came across lots of social items in the Gaffney Ledger about picnics, political rallies, and other events taking place on Goat Island. After the trestle burned, folks went back to using boats to access the island, but since it wasn’t as accessible, large events were no longer held there.

The line from Blacksburg to Cherokee Falls was finally abandoned by railroad company in 1967. However, the track and trestles were left intact. That leads us to the second part of the story, in which the tales of the Swamp Rabbit in Greenville and the Swamp Rabbit of Cherokee are intertwined. 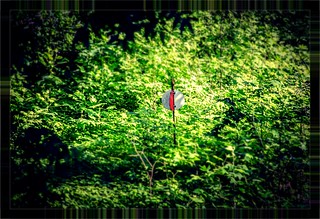 3 thoughts on “Chasing a THIRD Swamp Rabbit – Part 1, the History”