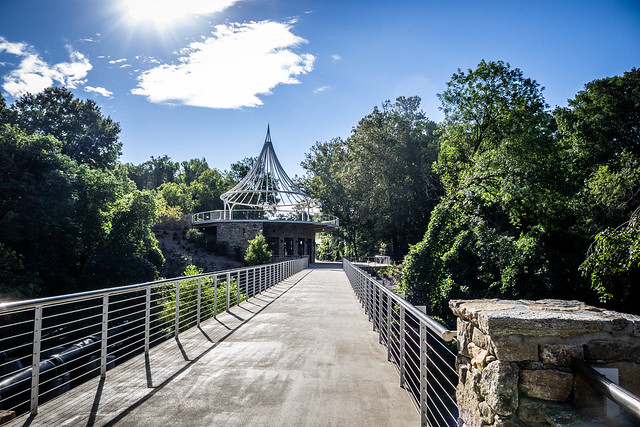 There’s been a lot happening over the last couple of weeks.  We had a trip to Tampa, FL to celebrate my sister, Glynda’s birthday.  There were computer OS upgrades, music events, and a major case of writer’s block.  Combine that with an impending Hurricane Florence and I just didn’t get around to writing.  I’m taking some time this week to catch up on posts.  A couple of weeks ago I paid another visit to Greenville’s Cancer Survivor Park along the Reedy River.  It was my first visit to the Falls Park area since our return from out west.

A few years ago I wrote a post entitled “A Tourist in Your Own Home Town.”  It was a short post, compared to the tomes I write now, consisting of only a few paragraphs and one photograph.  These couple of paragraphs sum up the point of that article:

Upon returning from this latest sabbatical I had a similar reaction, but with a different approach.  On Samish Island I dived into research on the locale, finding many musical events and places to visit.  When I got back here I did the same, looking for similar experiences.  I did this from the same perspective – as if I were new to town and didn’t know anything about it.

With that same frame of mind I decided to wander around downtown Greenville.  Although it had only been a year, there were lots of changes.  With all of the new construction, re-routing roads, condo’s springing up like weeks, and new shops and restaurants, it was as if I had moved into a new place, yet with an oddly familiar vibe.

My primary target was the new Cancer Survivors Park.  Located between Falls Park and Cleveland Park, this new park fills in one of the last untamed stretches along the Reedy River.  I had visited a couple of years ago when the upper boardwalk was completed.  At that time the new bridge across the Reedy and the planned pavilion were put on hold until funding could be obtained.  It looks like the funding did come through, as the park is almost near completion.

I parked in a lot on Cleveland Street just below the Chamber of Commerce building.  This parking lot had already been here, but now it was expanded and renovated to accommodate the park.  A heart shaped sculpture graced the entrance to the park and a path led from the parking lot and down to the Swamp Rabbit Trail (SRT). The most prominent feature was the pointed pavilion, an open air space for gatherings.

My first thought was that this would be an excellent place to hold an impromptu jam session like the one I visited at Taylor Dock in Fairhaven, Washington.  That thought ran through my mind several times as I wandered downtown.

From the pavilion there were views down to the rest of the park and the new bridge across the Reedy River.

Next to the pavilion is a dramatic water feature and rocky garden.  A set of stairs led to an enclosed space below and to the SRT.

Downstairs looked like another event space or display area, or perhaps an office for the park.  It was closed when I came by.  I crossed the new bridge.  It replaces and old steel grate bridge that was uncomfortable to cross, either by bicycle or on foot.  Next to the bridge is a pair of scenic sewer pipes.  I don’t think they will be able to do anything with those.

At this point the Reedy flows over a rock and into a deep pool at a bend in the river.  This looks like it would be a perfect recreational spot, with a sliding rock and and great place to wade and swim.  However, given a century of environmental abuse, I wonder if the Reedy will ever be safe for swimming.

Once again it struck me that this would be a great place for some informal music.  A small jam session or drum circle would be perfect here.  However, Greenville doesn’t make that easy.  More on that in a bit, though.  As for the boardwalk, in winter months it would provide spectacular views of the park.  Today, though, it was just a tree-lined canopy rising up to Church Street.

From the Cancer Survivors Park I headed on up to the Falls Park area.  I’ve visited this spot thousands of times.  I’ve watched the transformation from a seedy, polluted blight to the new center of our city.  Today, though, I tried to imagine it as if I were visiting for the first time.  As I walked I imagined that I was introducing the park to my friends in Washington, perhaps as a way of explaining why I don’t just pack up my bags and move to Skagit Valley.

This area is the Cradle of Greenville, where Richard Pearis first settled along the banks of the Reedy.  There are remnants of the old mills everywhere.  Furman University once sat on a hill overlooking the river.  The Governor’s School of the Arts now occupies that space.  The Liberty Bridge spans the river where four lane Camperdown Way once obscured the view of the falls.  I walked through the park, up the hill to Main Street, then across the Liberty Bridge, taking photos I’d taken many, many times before.

I continued on up the north side of the Reedy, past the buildings on Falls Place and past the Peace Center.  I thought of the many shows I’d seen there and the many more times I’d performed there.  I’d be seeing the B-52s there later this fall and I’d be singing on that stage in a couple of weeks.

I completed the circuit and made it back to my car.  However, I still wanted to explore.  As I drove around town I saw the many new condominiums rising where there had once been open spaces or older housing.  Affordable housing has become a major issue in the town as gentrification has eliminated older neighborhoods in favor of high-end rentals.

The Village of West Greenville

Eventually I made it to the Village of West Greenville.  This was once a strip of commerce wedge between two mill villages.  It always seemed separate, apart from the actual city.  In a sense, it was.  City View on the west side was a separate, incorporated town up until about twenty years ago.  Now West Greenville is a trendy village with art studios and new restaurants.

All of the storefronts had been spruced up with paint.  There was a new plaza where there had once been a short through-street.

I was looking for a lunch spot, so I stopped at a place called GBD – Golden Brown and Delicious.  It was a popular spot, but I thought it a bit overpriced for my bowl of mac and cheese.

I could have explored much more but I had chores awaiting.  The one thing that kept nagging me, though, was the opportunity, if any, for public music.  Get ready, because I’m going to end with a rant…

These new spaces are perfect for informal gatherings, but the City of Greenville won’t allow it.

I remember talking with Jeff Holland about drum circles.  He said that there once had been a regular circle in Falls Park, but the city shut them down.  I wondered about the actual policies for such spaces.  While the new Cancer Survivors Park is not included (yet) in their policies, city ordinances make it pretty clear.

Individuals wishing to perform for gratuities on City owned or operated sidewalks, plazas, parks and other public spaces are required to obtain a street performance permit at least 24 hours prior to performing.

But we’re not really performing for gratuities.  We just want to make music.  (And I say, “We”, hoping that there are like-minded people with whom I might one day play.)  Those ordinances included this under “events.”

Individuals, organizations and agencies wishing to conduct public gatherings on City of Greenville property are required to obtain a permit. This includes: block parties, concerts, parades, carnivals, park events, races, road closings, performances, filming, ceremonies and festivals. A Special Event Permit Application must be filled out and returned 15 to 60 business days prior to the start of the event.

According to this form, I’d have to pay a $25 fee for each gathering and carry $1000 in liability insurance for the event.  I’d have to submit a form each time 30 days in advance.  So much for impromptu gatherings.

I can understand wanting to bring some order to how the park is used, but this seems draconian.  Asheville has embraced its artistic side with its weekly drum circles.  I wish Greenville could come to some agreement that would allow for more flexibility with how these wonderful public spaces are used.  As it stands now, I NEVER see them used except at large festivals.  Oh well.

One thought on “Cancer Survivor’s Park and Downtown Revisited”