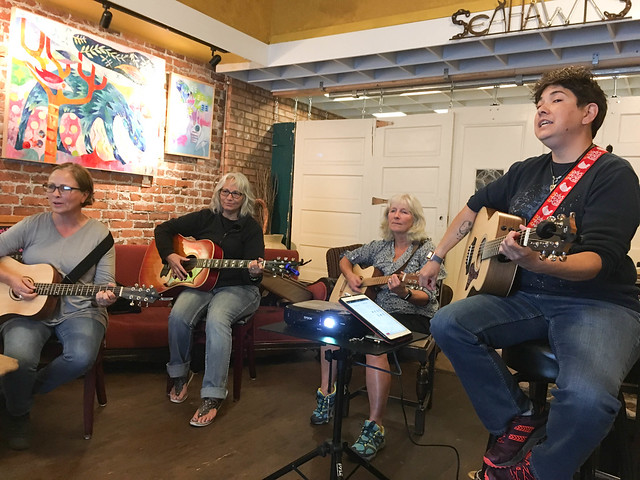 We’ve been looking for groups and outlets with which to get involved while here in Washington. I’ve been looking for musicians circles, drum circles, and other groups similar to those I’ve found in Greenville. No such luck. I haven’t even found a kayaking group. Then, I came across a listing for a Bring Your Own Guitar event on Facebook. The description sounded interesting, so I decided to check them out.

This event was part of the Bring Your Own Instrument organization. This seems to be an informal gathering with meetings for different instrument groups. There is a BYOU for Ukuleles and a percussion related one for “buckets and sticks.”

BYOG – is for aspiring musicians who have the desire to play the guitar or haven’t played for a while. We learn chords, strumming patterns, songs, and play with other guitarists.

Sounded perfect for me. I’m an OK guitarist, but until I got my new guitar earlier this summer I hadn’t played much. I had been concentrating on banjo. I took classical guitar when I was at Furman because notes and picking came more naturally to me than strumming.

The time came and I headed to the venue, Empire Ale House in downtown Mount Vernon. When I walked in there were only a couple of patrons and no guitars in sight. I wasn’t sure that I was in the right place, so I asked the bartender, who pointed me to a set of closed doors. I poked my head in, saw several with guitars and a projector and screen setup, so I popped back to the car and came back with guitar in hand.

Lisa was using an iPad app to project the lyrics and guitar chords. Tonight’s song would be “Take It Easy” by the Eagles. They practiced basic strum patterns and chords. Basically, it was a beginning guitar class.

Most of the time was spent on this one song. There were several levels of ability present. Jeremiah, seated across from me was one of the more accomplished guitarists, and would ad lib solos as we played. 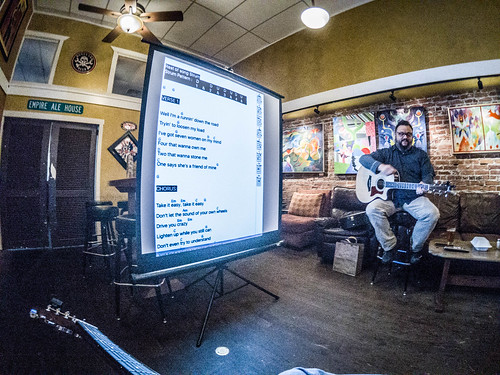 My own skills fell somewhere in between. I could handle everything we played with no problem, and found myself improvising as we went along. There was no feeling of competition, and it was fun to just play along.

After the group felt comfortable with “Take It Easy” we played through it completely with all verses and introduction. After that we revisited some of the songs they had learned. We played Green Day’s “Good Riddance” and Old Crow Medicine Show’s “Wagon Wheel.” I had no problem with any of those.

One of the players commented that all of these songs used the same chords and patterns. I jokingly commented that there were only about two or three songs and variations thereof. Jeremiah retorted…

The first is “Twinkle, Twinkle, Little Star.” And the second is “War Pigs” by Black Sabbath.

As if it weren’t weird enough, we closed with the Weird Al Yankovic version of “American Pie.”

Of course, the version they projected was the ukulele version, so I was a bit confused, but I coped. 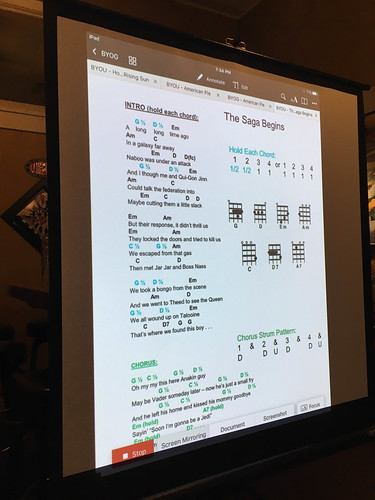 The evening was relaxed, the company was pleasant and fun to be around, and it was a good experienced all around. One thing I liked was that there were no heavy religious tones like there are in the groups I play with back home – no hymns, no CCM, and no twangy country. It was refreshing.

The session was more enjoyable than the musicians circles at Perryville and the Pickens Flea Market, where I felt a bit out of my element, and certainly less stressful than the Appalachian group I played with at Claussen Bakery. It was the next best thing to jamming with my brother and nephew. The next BYOG is in two weeks, and think I’ll try to make it. 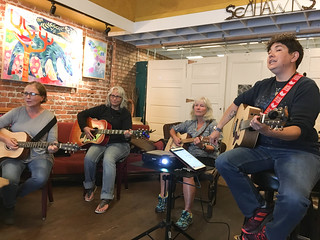 2 thoughts on “Bring Your Own Guitar”