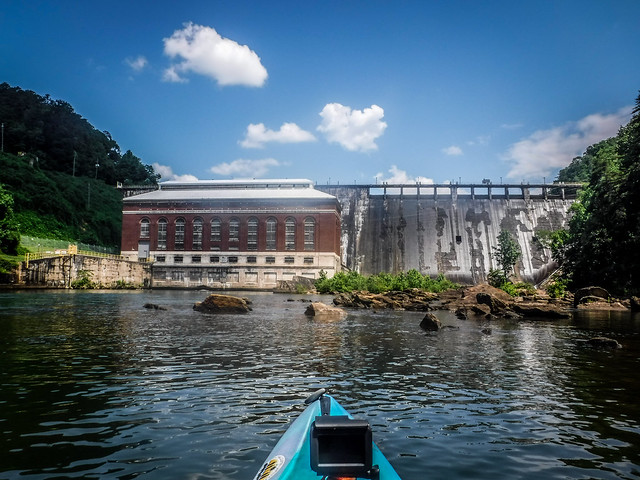 The border between Georgia and South Carolina is made up completely by water. Most of it is the Savannah River and the lakes formed by damming said river. However, there is a small section formed by the Tugaloo and Chattooga Rivers.

I’ve paddled most of these bodies – the Savannah, Clark Hill Reservoir, Lake Russell, Lake Hartwell, and the Chattooga River. I haven’t paddled the entire length, but I’ve taken a pretty big chunk out of it.

The past couple of weeks I’ve had the chance to kayak two of the uppermost lakes along the border – Lake Yonah and Lake Tugaloo. Both of these turned out to be spectacular paddling destinations.

I had planned to paddle up to Longnose Falls with a couple of friends. Sadly, both had to bow out for various reasons. That left me with a car already loaded with gear, so I decided to do a solo trek. I had been wanting to explore Lake Yonah, so this was the opportunity.

There are two public access points on Lake Yonah. One is a boat ramp at the southern end of the lake, near the dam, and the other is a ramp at a campground at the upper end of the lake. For this trip I opted for the lower ramp.

I arrived early on a Thursday morning to find several vehicles parked at the ramp, but no activity. I had the place to myself. I got the boat ready and launched into the cove around the ramp.

The cove led out past some very nice lake houses, then past the Yonah Dam to the main part of the lake.

Yonah Lake is quite narrow, in a mountainous setting. There were one or two boats out, but not much traffic at all. The houses were all kept neatly, not ostentatious, and most with nice boat houses and docks. It looked like the type of place I’d love to own.

I like to explore little coves, especially if there is a tributary with a waterfall or at least a babbling brook. I really only found one. Battle Creek enters from the north end of the lake.

Just around the corner from this was the Lake Tugaloo Dam.

On the east side of the dam there was an exposed rock wall. After a bit of scrambling I found my way to a view point. This looked like an old rock quarry, or at least a deep cove.

I paddled back toward the dam to see if there was an entrance to the quarry area. Sadly, I couldn’t find one easily accessible.

On the Georgia side there was a campground with a boat ramp. It looked like a great place to spend some time.

I made my way back to the other end of the lake. Boat traffic was starting to pick up. I watched one guy doing some amazing wakeboard skiing. He would let the line go slack then just ride the wake without the boat really pulling him.

I made it back to the ramp, having paddled 6.5 miles from end to end. It’s not a long lake, but the scenery was quite nice. I’d like to come back in the fall when the colors are out.

Here’s a link to the album from that trip. 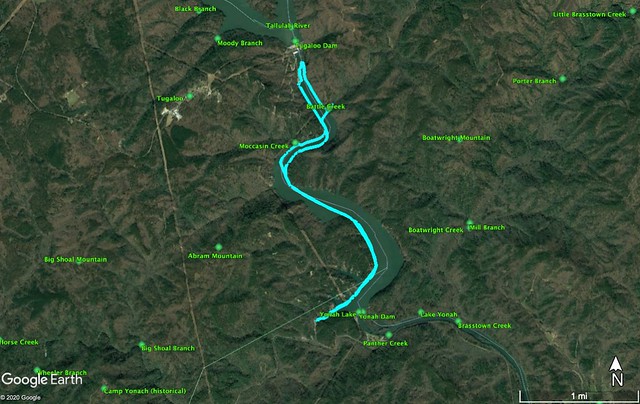 There is only one boat ramp on the South Carolina side of the lake. This ramp is accessed by a LONG winding road. Most of it’s paved, but there is a long dirt section. The pavement starts again just at the access to the ramp, but it’s a narrow, single-lane frequented by buses carrying rafting company customers. I drove cautiously.

Fortunately, with the pandemic most of the rafting companies aren’t operating, so there was no traffic and plenty of parking at the ramp. Plus, I was there very early and any rafting companies that were operating wouldn’t be there until later.

This time I’d brought my longest boat, since I wasn’t sure how far I’d be paddling.

I launched and headed south, toward the dam. Right away the sound of falling water caught my attention. Tugaloo has many more tributary streams than Yonah, so I decided to explore a bit. I ducked into a couple of coves along the way. Most of these were obscured with vegetation.

There are no houses or development along the banks. Most of the South Carolina side is in the National Forest. Along the way, though, I spotted several undeveloped campsites on various points.

The lake is smaller than I remembered, and I was at the dam before too long, despite my side explorations. From there I headed on up the Tallulah branch. Right away I was distracted by more sounds of water. I found another waterfall with the remains of a campground next to it.

The scenery along the Tallulah am was spectacular. The gorge narrows and is lined with rock walls. At one point I heard stereo waterfalls coming from either bank.

It was blazing hot. The deep sheltered coves and overhanging rocks provided some relief from the heat. I was tempted to abandon my boat and just float in the cool water for a bit, but still had lake to explore. I rounded a bend and approached the power station for the Tallulah Gorge. This was as far as I could paddle. The route became rocky and there was no way past the power station.

Just down from the dam I found a nice beach area where I could stop for a rest. I pulled up and cooled my heels for a bit.

After resting and cooling off, I headed back. One small fishing boat came by, but didn’t linger. Back out past the dam and on the main body of the lake I had one more place I wanted to explore. Back in another deep cove was another boat ramp, this time on the Georgia side. There was another tributary stream and make-shift camping area. I wondered if this might be another good launch spot, or if it would be just as hard or harder to reach than the South Carolina side.

I paddled back out, and was soon approaching the South Carolina ramp. I kept hearing water from the other side of the lake, so I decided on one last detour. This was another nice little cove with a waterfall.

I toyed with the idea of continuing on up the Chattooga branch, but thunder in the distance convinced me otherwise. I waited for a bit for another boat to launch.

The guy launching was from the Nantahala Outdoors Center. Apparently NOC is the only group running the Chattooga right now. He was interested in my boat so we chatted a bit before he set off and I went to retrieve my car. I got loaded and ready for my long trek back home just as thunder rumbled overhead. I’d paddled right at 10 miles on this trek.

Lakes Yonah and Tugaloo offer many of the same things that attract folks to Lake Jocassee – clear water, mountain views, spectacular scenery, and even a few waterfalls. However, these lakes don’t seem to be nearly as crowded. Lake Yonah does allow most types of boats. Lake Tugaloo limits the size of the boats, but I know from experience that the landing can be a zoo during the height of river rafting season. My recent visits have been on week days, so these impressions could be quite different on a busy weekend.

Even so, these two lakes are now a couple of my favorite paddling destinations. I definitely want to come back this fall when the leaves are out.

One thought on “Border Lakes along Georgia and South Carolina”