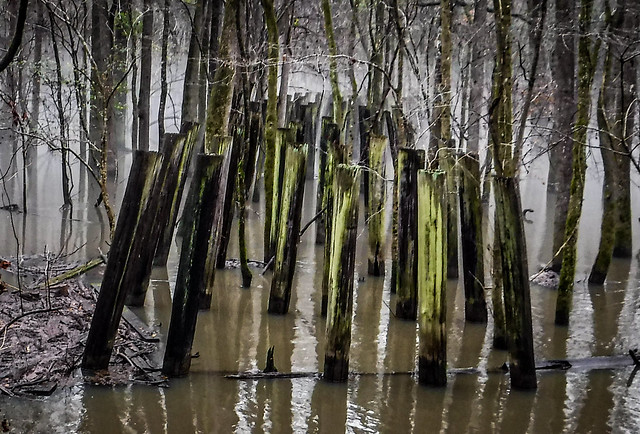 The first Lowcountry Unfiltered trip of the year is usually what we call a “swamp stomp,” a hike that takes us out into the wetlands of the lower part of the state. This year we decided to revisit a portion of the Palmetto Trail, this time on by bike.

The Wateree Passage of the Palmetto Trail is on the northern edge of Manchester State Forest in Sumter County. We had visited this trail once before in 2013. On that visit we were on foot. This time we were hoping that we could go farther on bikes, possibly even reaching the Wateree River.

The forecast wasn’t the best. It would be raining most of the day, but we went for it anyway. Our rendezvous point would be Batten’s in Wedgefield, our spot for breakfast whenever we make a trek out this way. Five of us gathered, Alan Russell, Alan Eisman, Matt Richardson, and Jimmy Stein.

Batten’s is an institution in Wedgefield. It’s a typical country store with bait and other southern delicacies. I was tempted to stock up for our trek.

Suitably sated, we loaded up and headed to the trailhead near Molly’s Bluff. The rain was coming down and dirt access road was dicey. It would get worse. Much worse.

We donned rain year while getting ready to head out. From the parking area we descended down to the trail.

The trail follows the track of an old rail bed. This rail was originally constructed in 1848 connecting the South Carolina Railroad at Wateree to the town of Camden. In 1854 a “wye” junction was built to connect this to the Wilmington and Manchester Railroad. The highlighted section on the second map below shows the portion we would travel. 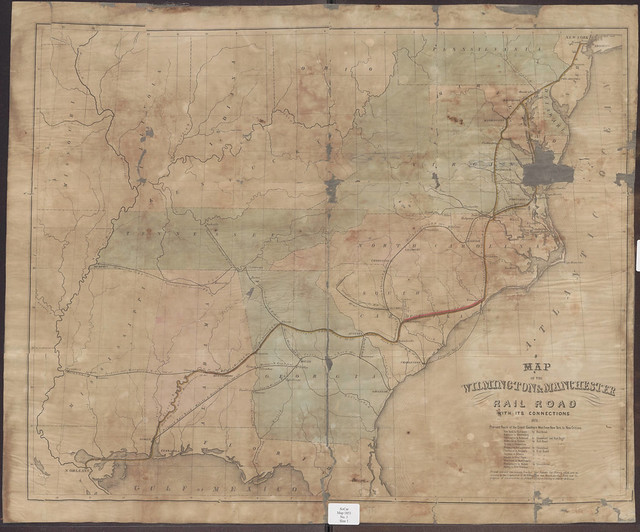 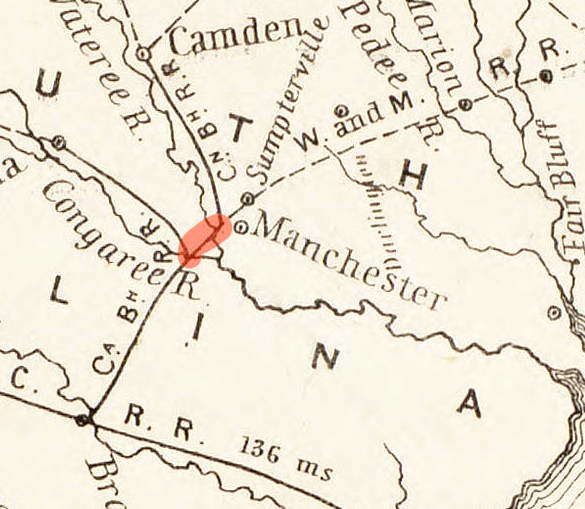 The good news was that our route would be very level and straight, if not dry. 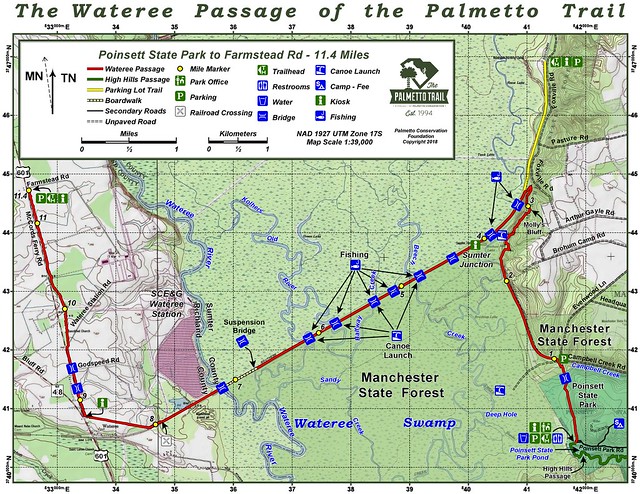 The trip started out well, but wet. As we looked north and south of our route we could see that the forests were flooded with the recent rain. Water was flowing swiftly through the sloughs as we crossed the various trestles.

I was starting to think that we had brought the wrong mode of transportation. It would be cool to explore this area via kayak. In fact, the official map shows boat launches all along this route at each of the trestles. You would have to haul the boats a long way, though, and the water level would have to be just right. Today, the currents might be a bit too dangerous.

At the second trestle we found a set of steps leading down. On our previous trip we had ventured down this way, and we parked the bikes and explored again on this trip. However, with the water this high we couldn’t go too far. We found lots of rail remnants. I’d left my metal detector back in the car, but I’m sure I’d only find spikes in this area.

On the other side of this trestle we paused again, this time at a kiosk with benches on either side. Two metal rails veered back toward the trestle into the woods. We had reached Sumter Junction, the point where the Wateree to Camden Rails and the Wilmington and Manchester Railroad diverged.

We followed the rails for about a hundred yards, which led us to a phantom trestle. Only the pilings remain, leaving “Woodhenge.”

When we visited this spot in 2013 the view was quite different.

As we lingered at the junction a small copperhead made its way from under the rocks.

We mounted up and continued on our trek. The rain let up, for the most part. However, it did make the trestles slippery. We watch out. We continued cautiously across the trestles, pausing only occasionally.

Once again I found myself wishing I had a kayak to explore this area.

This was, by far, the longest of the trestles. The end of it connected with the old steel railroad bridge across the Wateree itself. We explored on foot.

There seemed to be a preternatural straightness to the trail beyond. In the distance it almost looked like a monument standing upright. The ridge leading to that point was bordered on either side with water. To the south were mounds, the remnants of an old quarry.

Beyond this point the trail was lined with rails and railroad ties. Biking would be bumpy and impractical. Exploring the immediate area I spotted the remains of brick structures. A dirt road cross the railroad at this point, running north and south. Where the rail crossed the road had been paved

It was time to turn back. We rode back, pausing only to catch our breath. Once back at the vehicles we enjoyed Buffalo chicken sandwiches.

We weren’t done with exploring or adventure. We had planned to head up to the Church of the Holy Cross, Stateburg, and the old Lenoir Store. Getting back to the main road from the trailhead proved to be the greatest challenge of the day, though. The Palmetto Trail website puts it this way…

Foxville Rd can be difficult to drive on in wet weather for non 4 wheel drive vehicles.

That was most certainly the case today. Matt had some difficulty in his Jeep, but made it through. Alan’s Rav4 didn’t have four-wheel drive, so I watched in horror as he skidded and spun in the deep muddy ruts. I tried to keep a safe distance so that he wouldn’t slide backwards into me. He made it…just barely. I worried about how my car would do, but the all-wheel drive of the Subaru handled it without a problem.

The road finally dropped us onto Highway 378, rather than taking us back to Wedgefield. From there we turned toward Stateburg, with a stop at the Church of the Holy Cross. We spent some time around the church and cemetery, but the rain had started again, so we didn’t linger too long.

I decided not to go with the rest of the guys up to Lenoir Store, but decided to head on home. It had been a great, but tiring day.

4 thoughts on “Biking the Wateree Passage”