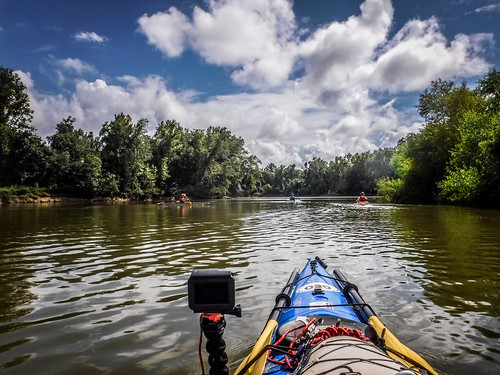 I don’t know why, but this pandemic has given me the worst case of writer’s block…ever. I will try to catch up, but I make no guarantees. With writer’s block comes a loss of direction. When I’m out rambling I usually do so knowing that I’ll write about it here. It gets to be a vicious cycle. I don’t get around to writing something, so when I head out I’m not motivated to take photos and wind up wandering aimlessly. I’m now making an attempt to remedy that.

With that in mind, I’m going back to September, specifically the Second Saturday of September. My friends from Lowcountry Unfiltered decided to do a stretch of the Santee River. It was a great day of paddling through history and it was my first night away from home since this pandemic mess began.

I did a leisurely drive down the Friday before the trip with plans to stay in Monck’s Corner. My route took me through several low country towns, including Eutawville, St. Stephen, and even Marion. Many of these downtown areas are suffering, full of empty buildings in decay. Some of these buildings have found new life…as religious buildings.

As I had noticed with so many other rural churches in this area, the length of the organization’s name and the loftiness of the church’s leader are often inversely proportional to the size of the congregation.

Storefronts weren’t the only religious organizations I saw on this trek. In St. Stephen I stopped by the old St. Stephen’s Episcopal Church.

The church is on the National Register of Historic Places and its architecture reminds me of Pompion Chapel or the ruins of Pon Pon Chapel of Ease. I wasn’t able to go inside, but I did explore the cemetery. There were lots of old headstones and many with signatures. The White family of stone carvers was well represented.

Our paddle route for Saturday would take us from Laurel Hill Landing to Leneud’s Ferry Landing just outside of Jamestown, SC. Since I still had a bit of time I decided to check out the landings. First I drove down to a landing I knew we wouldn’t be using. Wilson’s Landing is the first after the Santee leaves Lake Marion. I drove to one end of the dam then down to the landing. The river at this point looked quite inviting and I’d love to paddle this stretch someday.

Laurel Hill was not so enticing. The approach road was quite muddy and I was glad for four-wheel drive. The ramp, such as it was, was a disaster, with mud was so thick and deep I almost lost a shoe. I passed the info along to the rest of LCU and we decided it would be a no-go.

My first night in a hotel since the pandemic was OK. I wiped down all surfaces and kept mask on while out and about. Dinner was excellent take-out from a nearby Mexican restaurant. I felt safe.