As with all of these treks that take me down two-lane highways, it is so easy to get distracted along the way. There are always potential photographs. I think I suffer from scenic ADHD. However, this time I was able to maintain focus, and I made it to the site at the appointed time.

I found an open gate with one other car at my coordinates. Assuming this to be the correct one, I drove on in. Nicole was the only other person there, and she was just getting set up. 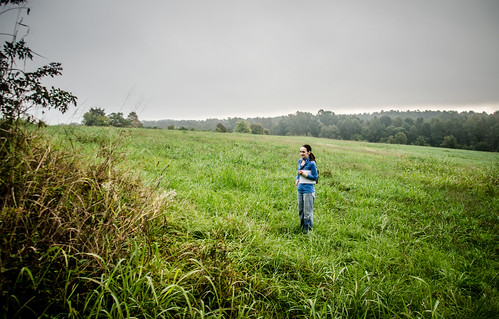 Nicole was waiting for someone from DNR to arrive with equipment to help locate the kiln and lay out the grid for excavation. She said that since this was the first day, it would be kind of boring since they were just getting the grid set up. Actual digging would take place later.

I paused to take a few photos of the field and the mound where previous excavations had taken place. Grass was still high in the field, and I was wondering how different this might look in a few days. 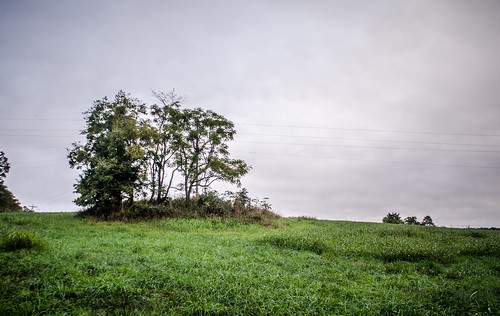 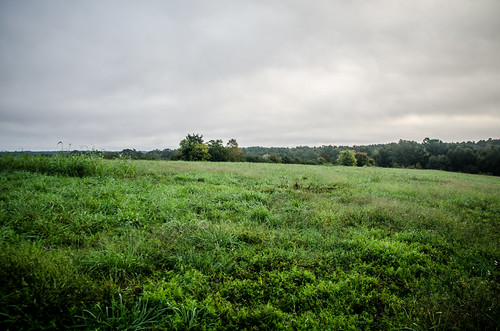 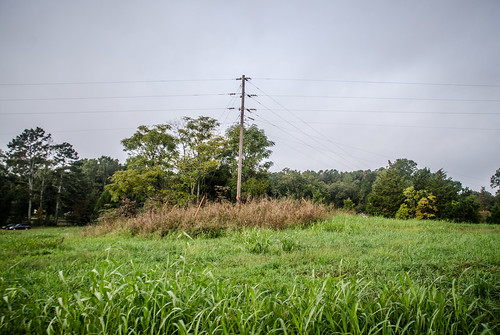 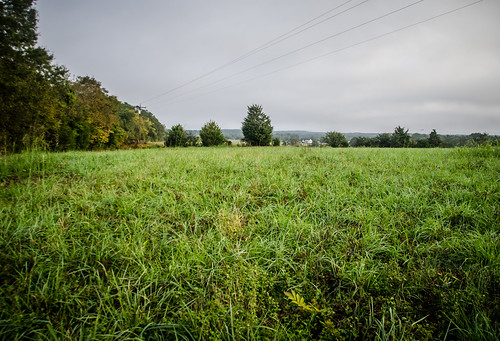 Nicole had several GPS Coordinates she needed to find. These locations would have been marked with either a PVC pipe or rebar. Amazingly, I had forgotten my hand-held GPS. I usually NEVER go anywhere without it, but I had left it at home in my dry bag from my last paddling trip. I need to transfer it to my rambling bag, which is where it usually stays. I tried to make do with my iPhone, but we had no luck. We both wandered all over that field looking for the stobs.

Having been unsuccessful, we decided to wait for the guy with the proper equipment. Nicole showed me around the site, including the location of the previous dig. This was on a brush covered hill. We found the stone remains of one kiln, and a few potsherds on the ground. 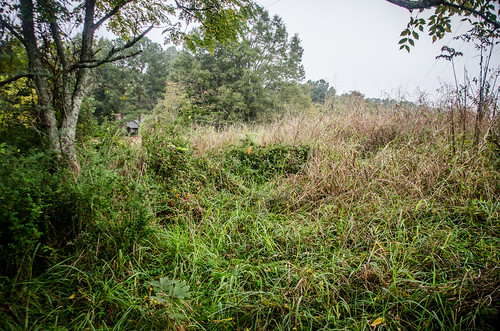 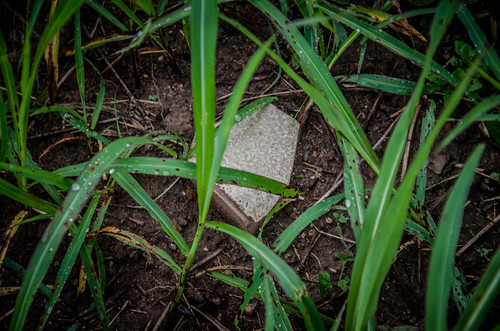 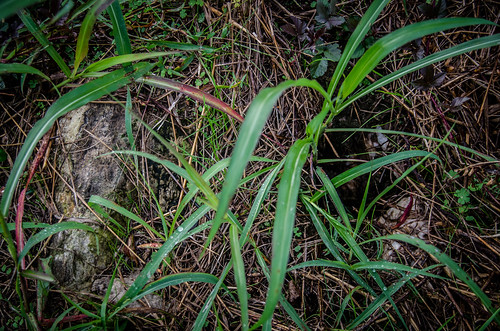 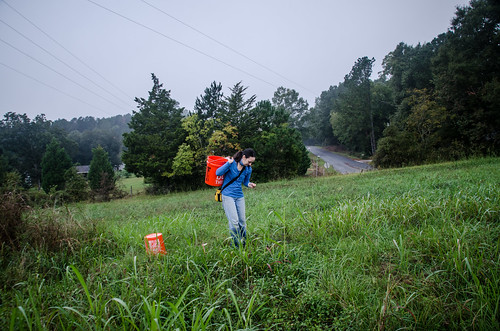 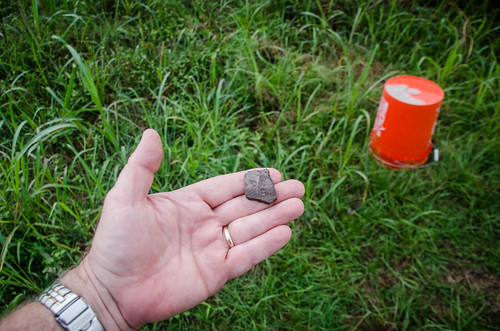 I asked Nicole what they expected to find at the site. She said that they suspected that the kiln they would uncover was similar to a dragon kiln, a long kiln with a fire pit at one end, openings on the side for adding pottery, and a smoke stake at the end.

I asked about what they would do with what they found. Nicole said that they would take some of the sherds and perform lipid tests on them. Analyzing any fatty content that might have leached into the pots would give indications about what the pots might have contained, as well as any additives during the firing process. The sherds are analyzed for chemical makeup in general. They also do an STM analysis on the sample. Since that’s Laura’s area of expertise, I was wishing she had been able to come along.

I also asked about Archeology Month in general. Nicole works for a non-profit archeology survey company. She said that each year she tries to coordinate some public access to a dig site. Last year due to health reasons she was not able to coordinate one, so they had a series of activities at various state parks.

According to Nicole, the DNR guy was supposed to come at 10:00. Since we still had a good bit of time, I left her to get things ready, and I set off wandering. I had a couple of locations I wanted to check out nearby.

I’ll write more in the next post about the interlude, but one of the things I found while out and about was a re-creation of one of the kilns. Just past the 430-25 intersection is the Goldberg Kiln. This was a working model used for demonstrations. 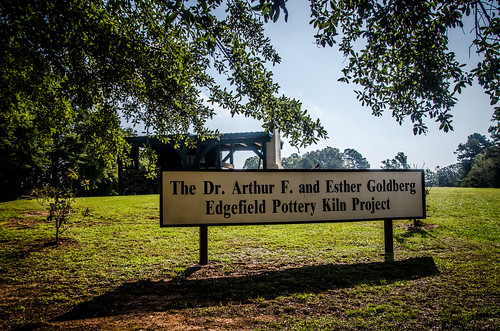 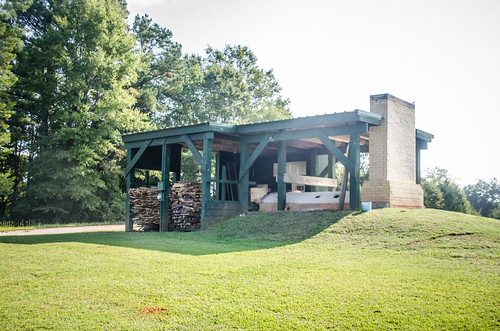 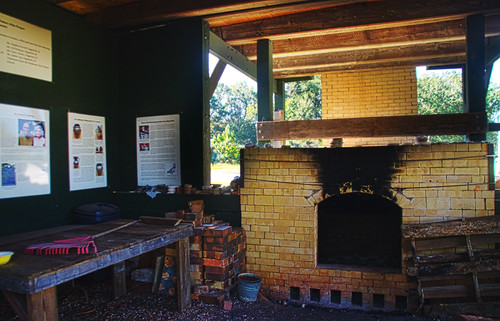 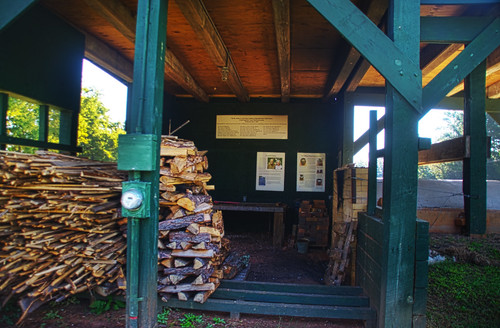 It was now a little after 10:00, so I headed back to the excavation site. Nicole had been joined by Carrie Monday, the volunteer coordinator for the project. 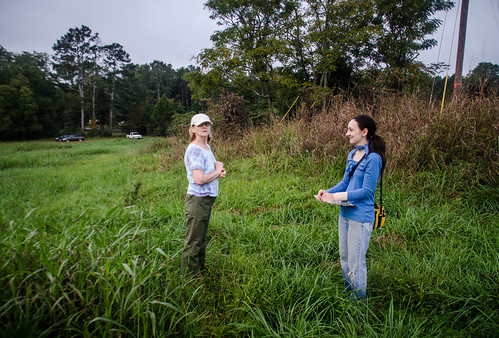 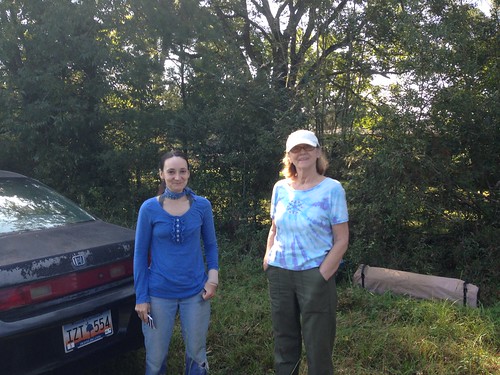 Carrie and I had a great conversation about local history. It turns out that we are distantly related through the Utz-Outz line. She also works with the Edgefield Historical Society. I mentioned my ghost town project and told her I’d have to come back and pay her a visit.

I also said that I was out and about taking photos of old schools today, and she gave me some excellent information related to the Meeting Street murders. Despite the fact that Sue Logue was convicted of murder and died in the electric chair, she was well thought-of in the community. She had been a teacher, and taught locally. According to Carrie the school where she taught was still standing, not far away, though it was not on my list of extant schools.

While we talked the owner of the field came out with a tractor and began mowing the field a bit more closely so that we could find the markers. Nicole had heard from the DNR guy, and his arrival would be much later than we thought. I decided it was time to go in search of some schools to photograph. I thanked my hosts for the tour and information and headed on my way.

I’m not done with Edgefield Pottery, though. I’m hoping to come back when they are further along with the excavations and see what things are like then. Should be fun.

3 thoughts on “Archeology at Pottersville”