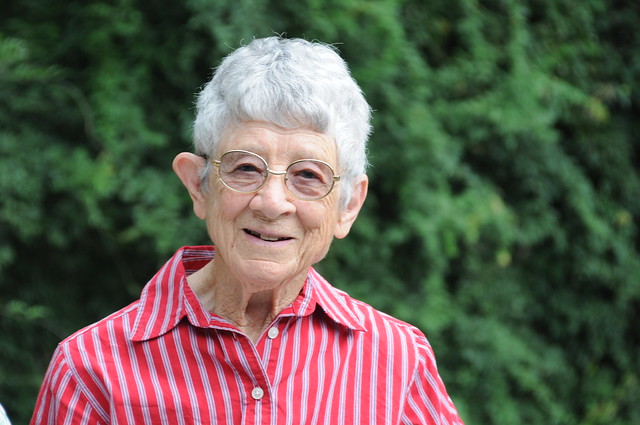 Grace Ellenberg was born on May 28, 1921 in Ninety Six to William T. and Annie Smith Ellenberg. She was the seventh child out of eleven – three boys and six girls. Grace grew up on the farm, and excelled in school. 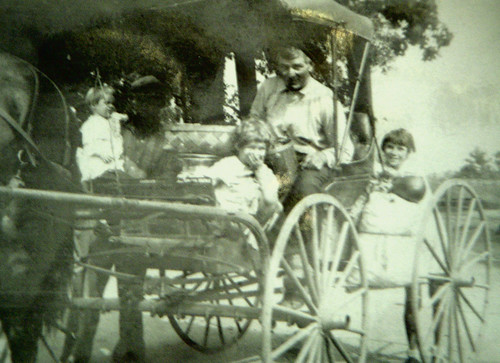 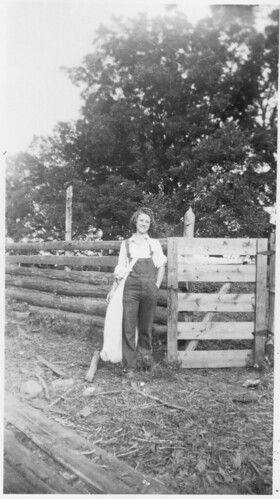 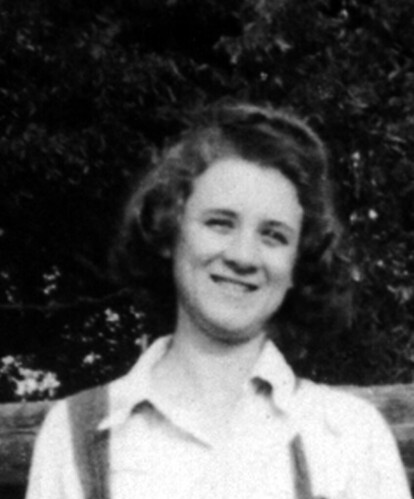 When she finished Ninety Six High School, Aunt Grace entered Holmes Bible College in 1938 with her brother Bill. It was here that Grace solidified her faith.

The Greenville Index-Journal documented this, as well as other events in Grace’s life. Most of these were listed in the social news of the time. I guess this was the precursor to Facebook. These recorded when Grace entered Newberry College in 1944, living with now Rev. Bill Ellenberg in Whitmire and commuting to the college, where she studied French. 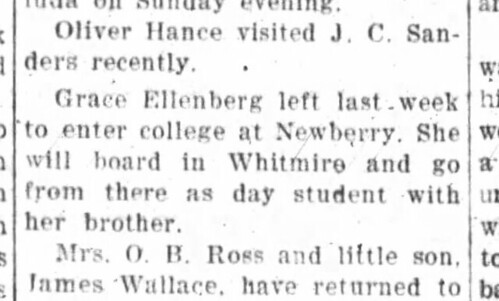 When Aunt Grace finished college she began teaching at Ninety Six High School. She taught French, History, and Psychology. This was just post World War II, and Aunt Grace thought it would be good for her students to have pen pals with students in France. Aunt Grace pulled a name from the hat for herself.

Thus began a long-time correspondence with Ginette Vauthieu. Grace and Ginette wrote each other several letters each week. Sometime in the late 1940s, early 1950s Grace made her first trip abroad, traveling by cargo ship to meet Ginette.

Aunt Grace made many other trips abroad while teaching at Ninety Six. She traveled to Europe and to Mexico. During this time she also took graduate courses at Duke University, Middlebury College in Vermont, the University of Mexico, and at the Sorbonne in Paris. As such a well-traveled woman, she became something of a celebrity in Greenwood County. She gave regular talks to PTA and civic groups about her travels. 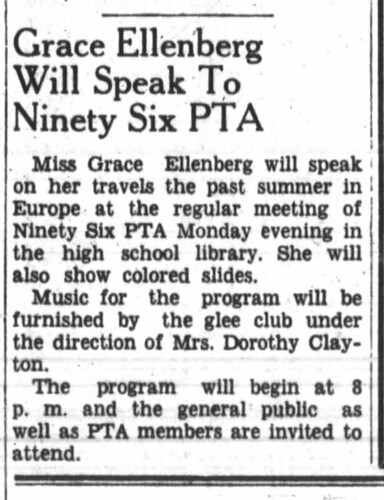 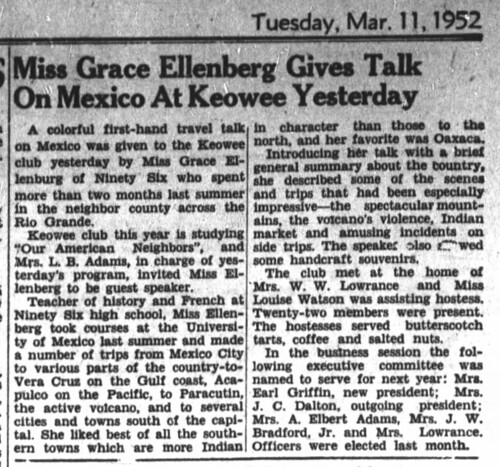 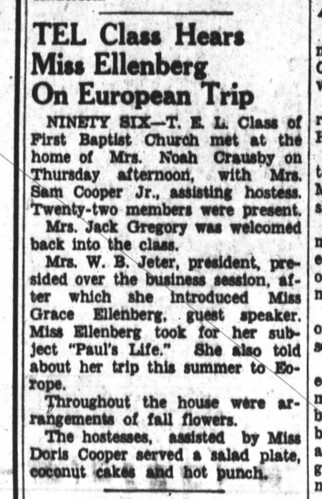 This one article sums up the essence of Aunt Grace, where she combined a trip to Paris with a visit to the Pentecostal World Conference in London. 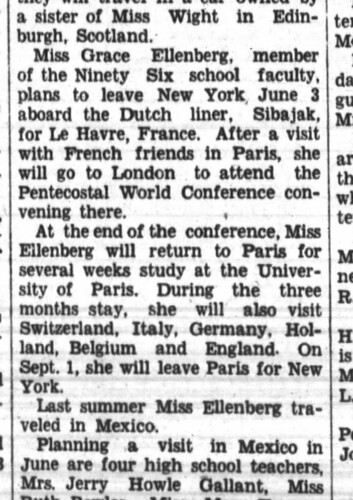 She even wrote several of the articles herself. You can click on the images to make them larger. 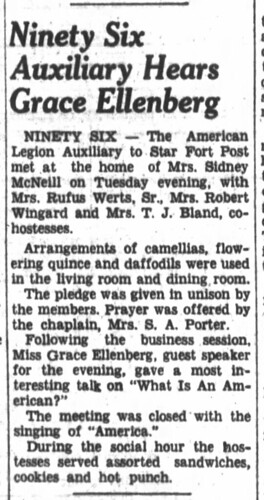 Aunt Grace had accumulated enough hours for a doctorate, but never completed a dissertation. By the late 1950s Grace moved to Europe, teaching first in Verden, Germany, then in Paris.

While in Paris Aunt Grace continued her travels. She visited the Middle East and was said to have climbed the Great Pyramid at a time when that was permitted. Grace didn’t want to be a tourist, but preferred to do what the locals did. She often traveled by herself.

In the mid 1960’s my cousin Phebe Price Roberson lived with Aunt Grace in Europe for a year. Phebe told me that they would pack Grace’s VW with camping equipment and travel as far as they could, including Switzerland, Italy, England, Spain, Morocco, Germany, and Belgium. As a government employee, Grace had PX privileges at army bases. She was frugal, and preferred to camp rather than spend money on hostels or hotels.

In 1967 President Charles du Gualle no longer wanted NATO headquarters in France, so Grace’s school was closed and the teachers reassigned. Grace taught in Heidelberg for a bit, then returned home sometime around 1970.

Aunt Grace moved to Greenville, North Carolina, where she began teaching French at Eastern Carolina University. She taught there for nineteen years until her retirement. Even after her retirement she continued to give talks, both on her travels and on religious topics, usually at Pentecostal Holiness churches. 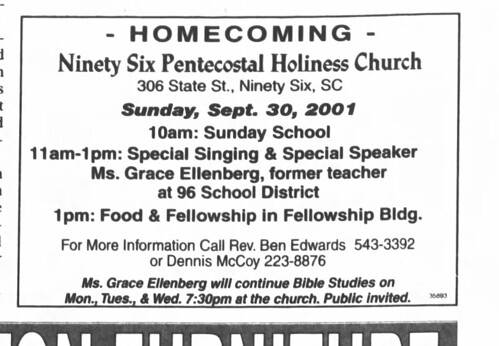 Following her time abroad, Grace settled in Greenville, NC, where she taught French at East Carolina University for nineteen years before retiring. From her home on East Wright Road, she could often be seen walking the two miles to her university classroom. Even after her retirement, Grace continued to audit classes, including studies in Greek and history, where she sat with students sixty-plus years her junior. Five years ago, she moved to Cypress Glen. Until recently, she was in excellent health, and enjoyed travelling, walking, and gardening. 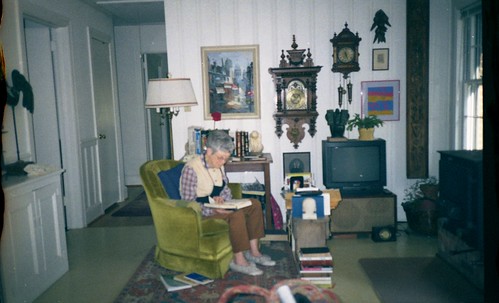 I didn’t get to see my Aunt Grace very often, but she always struck me as a fascinating, yet very pious person. At an Ellenberg reunion she once mentioned that she would be speaking the next day at a local Pentecostal Holiness church. That would be a Sunday, so I erroneously said, “So, you’ll be preaching in the morning?”, to which she replied, “I am not permitted to preach.” 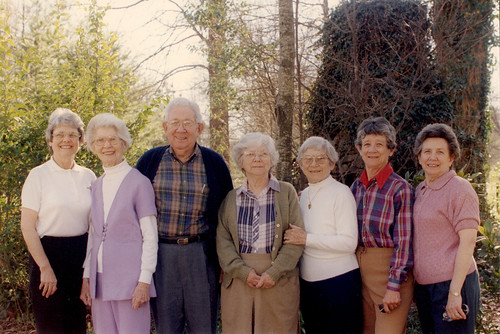 Which brings up another point…Aunt Grace was very complex. She had very strict beliefs, yet she defied the norms set for women of her time. As Phebe said, “She submitted to God’s Will, but had a mind of her own.” She loved knowledge and study. Her best friends in Greenville were part of the Islamic community, in a time when the nation seems divided over Islamophobia.

Our last big gathering was for Grace’s 90th birthday, when as many of the Ellenberg clan as possible gathered for the celebration. 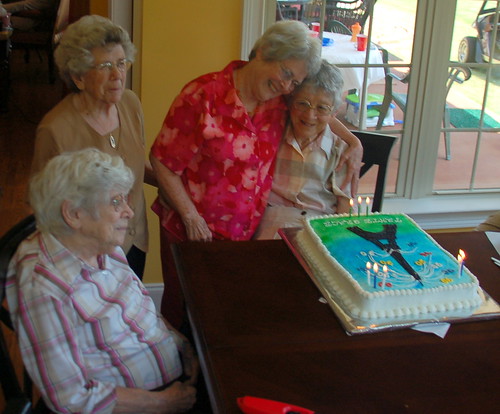 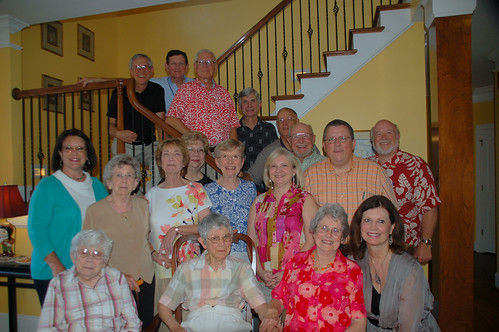 Grace is survived by her sister, Aunt Lou (Lois) Price, the last of the Ellenberg siblings, and by many nieces and nephews. In keeping with her unconventional nature, Grace didn’t want to have a funeral or memorial service. Instead, she donated her body to science. She said that if the cousins wanted to have a gathering later, that was fine, but we better not call it a memorial. She also said she didn’t want anything in print, so I guess she’s now going to come haunt me. And maybe that wouldn’t be such a bad thing.

So, goodbye, Aunt Grace. I hope that you find the next stage of the adventure as exciting as the amazing long life you have already lived. You have been an inspiration to all of us. 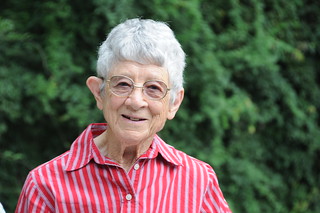