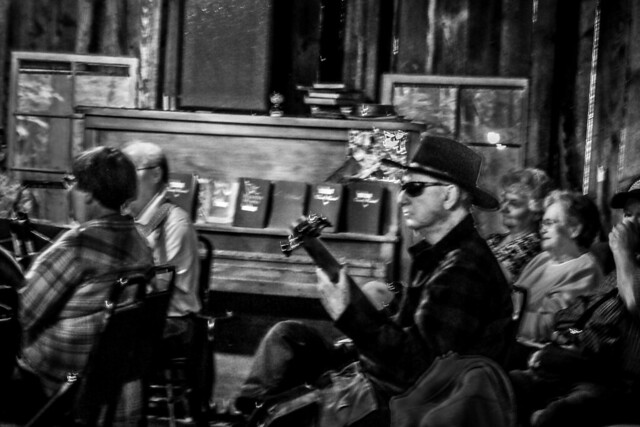 The end of Monday nigh Chorale rehearsals means that I’m free to visit Perryville and join their musician’s circle. I decided to do just that this week, and I learned a valuable lesson – don’t pass the microphone.

I’ve been to Perryville several times now, as an observer once and as a performer twice. Both times I’d been there with my banjo I had politely declined when the microphone was passed my way. I had played once at the Pickens Flea Market and done the same thing. Every time I passed the mic along to someone else, I got the feeling that I had committed a major social faux pas. This time I was determined to do something, even if it was just to sing an old gospel song.

A couple of weeks ago I picked up a Hohner 37-key melodica. Basically, you blow in one end and play a piano keyboard. If you’re even a casual keyboard player, then this thing is super simple. With the addition of breath control I was able to get a very expressive tone from it. I had also been playing lots of jigs and reels. I still hadn’t figured out how it might fit into a setting like Perryville, especially with its garish colors, but I decided that in addition to my banjo I was going to bring it along. 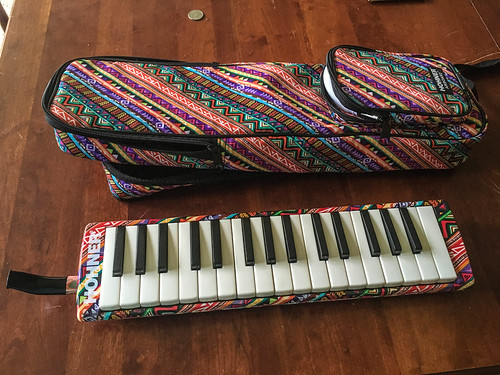 So I set off for Perryville. I had a delayed departure, so I didn’t arrive right at the beginning at 7:00. Things were already underway, so I just took a seat to listen. 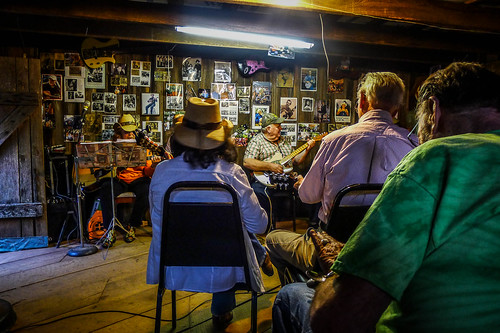 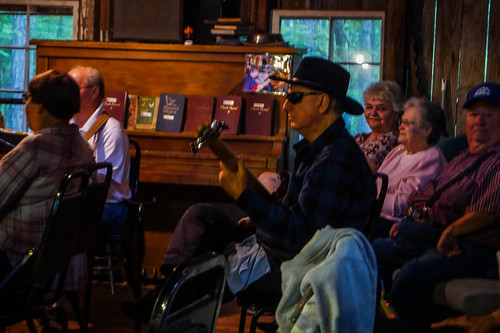 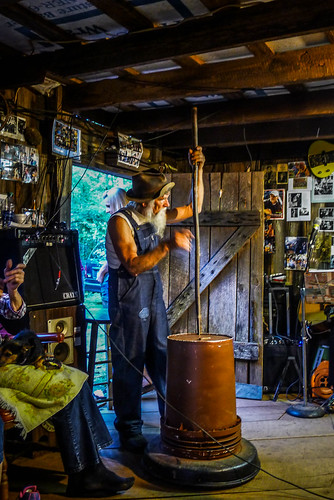 At first I was a bit disoriented. Since the last time I was here Robert had doubled the size of the place. I almost thought I was looking into a mirror, but then realized that it was just that the space was much larger. Not only was the space larger, but there seemed to be many more musicians this time.

It wasn’t long before the group took a break. Both Robert and Sharon came over and greeted me warmly and Robert asked if I were going to sing this evening. For once I could answer him in the affirmative. I had a plan. While the group was taking a break I went back out to the car and retrieved the banjo and melodica.

I took my spot on the outskirts of the circle, next to a blind bass player whom I had not met. There were multiple guitars, including several electric guitars, the banjo player who had offered me lessons on a previous visit (Michael?), but no harmonicas this time.

Things started as usual, going around the circle. I played banjo and did a pretty good job of keeping up. With this many musicians it took awhile for the microphone to get around to me, but eventually it did. Time to put my plan into action.

I had selected “Precious Lord, Take My Hand” as my piece. I figured it was well known and the group could play it. There was the Elvis appeal, as he had recorded it. Plus, I could either sing it or play it on the melodica. The banjo would remain silent.

I decided to open with the melodica. I started playing the melody and played for the first verse, then I sang the second verse. I played two more verses on the melodica, improvising a few ornamentations along the way. It was a hit. I got lots of applause. More importantly, I got lots of questions about the instrument. Many of these folks had never seen one, and they wanted to know more about it.

I played for two more hours with the group. When they picked a song in a key I couldn’t handle on the banjo I vamped chords on the melodica. One thing I realized was that I could really wail away on those old long lonesome country songs. This was the perfect instrument.

The folks had always been friendly, and Robert and Sharon have always been gracious. However, something was different now that I was being a bit more outgoing with my playing. I got several invitations to come to different musician’s circles all around the area. If I wanted, I could be playing somewhere every night of the week. Even the woman who scowled at me the first time I’d played my banjo here asked, “Is this your first time here?” She was complimentary of my melodica, but even complimented my banjo playing. I had a blast.

So, the lesson learn?

Never pass the mic. Always have a song prepared.

It doesn’t matter if you sing or play well. Some of these folks were fantastic musicians. Mike switch from banjo to fiddle to guitar several times. There was one guy on guitar who was excellent. 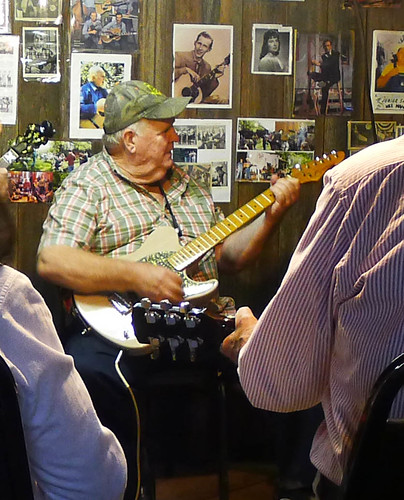 However, many were NOT what I’d classify as singers. It doesn’t matter, though. You just need to pick a song you know and go with it.

Having learned this important truth I was ready for more. Wednesday morning I hauled the banjo and melodica over to the Pickens Flea Market to join the circle there. When I arrived Robert and Sharon had just gotten there. He had driven his old Dodge truck down the mountain from Pumpkintown. 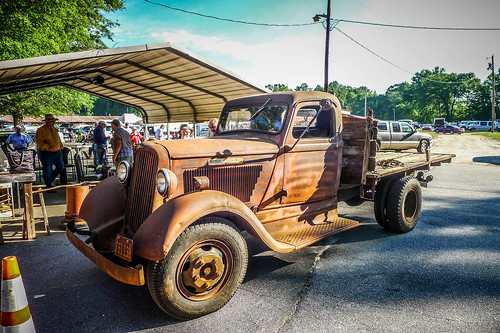 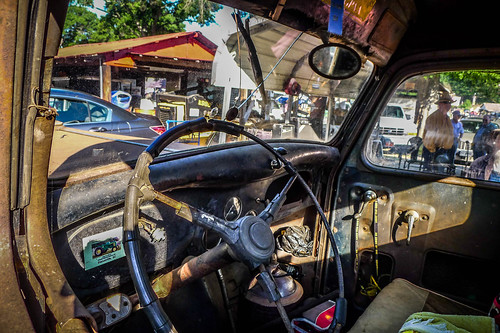 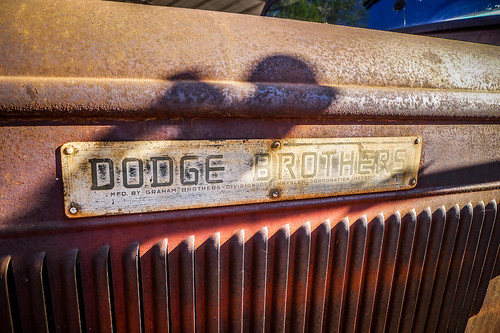 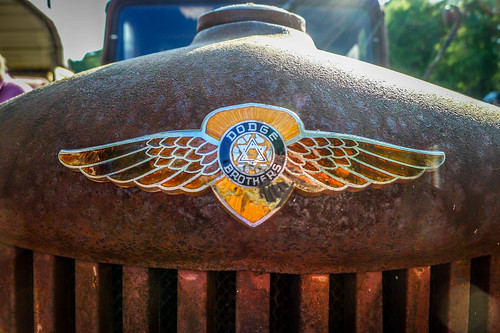 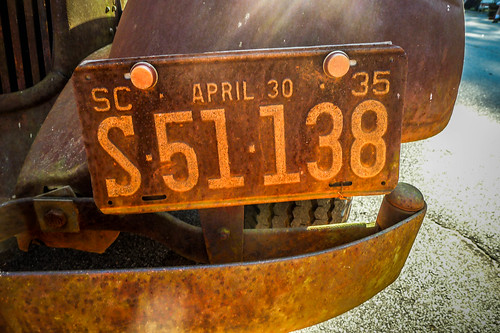 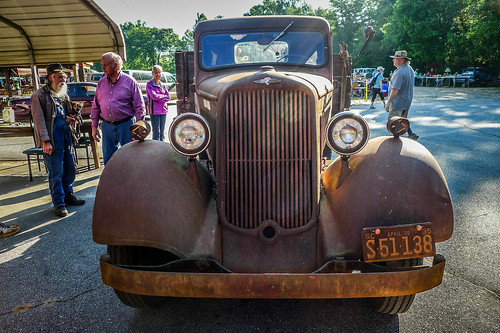 As for the circle, it was quite small compared to Monday night. Ivan the harmonica player was there along with another banjo player, another harmonica payer and a couple of guitars. That microphone would be coming around to me quite a bit. I was a little concerned about how the melodica would sound with multiple harmonicas going. 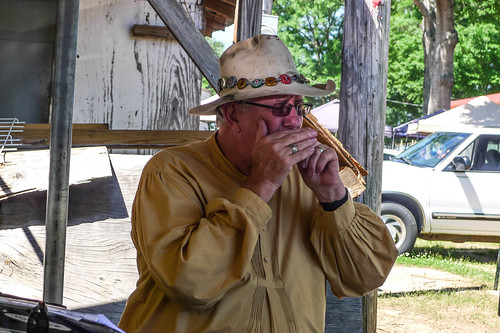 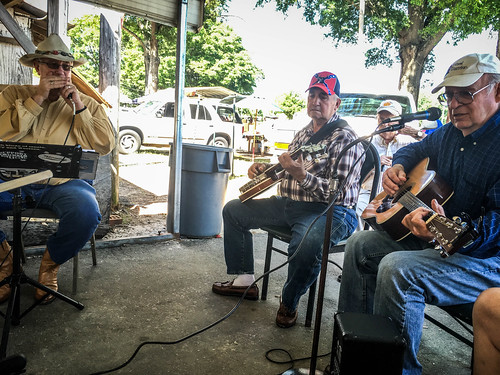 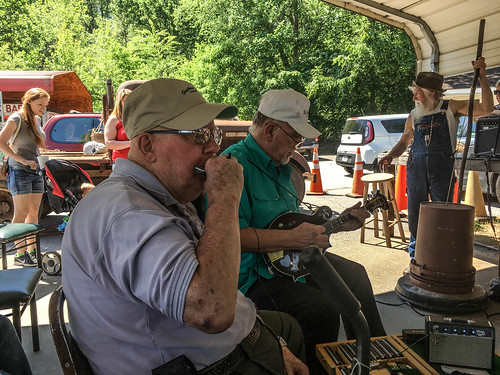 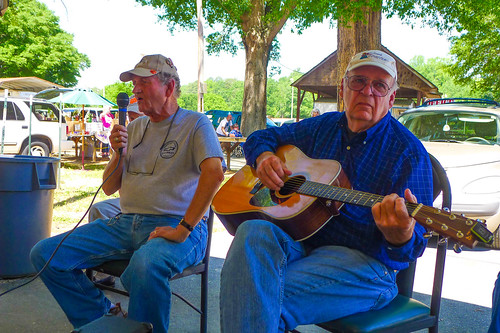 As with Monday night I started with Precious Lord. I didn’t try to sing this time, though, but just played. I got a good bit of applause from the flea market crowd. I had just finished when I heard my name called, and looked up to see my brother-in-law, Jennings standing there with two of his grandkids. My sister and my niece’s family soon joined them.

The microphone passed several times. I did Lonesome Valley and When the Saints Go Marching In. Also, as with Monday, when I didn’t feel comfortable with a song on the banjo I would just vamp on the melodica. It worked.

I even did a bit of recording. The recorder was too close to my instrument, and tends to mask out other sounds. I boosted some of the other audio so you could hear it. Here is Amazing Grace.

I was pleased to discover that the melodica didn’t clash with the harmonicas. On a couple of pieces one of the harmonica players would take the lead, and I’d improvise a high tenor harmony. It worked out quite well.

On this beautiful day the flea market was crowded. There were LOTS of cameras, and I wound up in lots of photos, I’m sure. Which reminded me of something I’d posted on Facebook regarding a recent dream…

The Prednisone™ Dream – One of the worst side effects of gout treatment so far. I wake up after only a couple of hours of sleep with a deep undefined anxiety. Usually it’s triggered by some weird dream that has so profoundly upset the laws of physics that it seems to spill over into reality.

Tonight’s dream? Earlier this evening I was at Perryville playing my banjo at their musician’s circle. I was also there in my dream, along with people taking photos and making recordings. In the dream, every time someone took a photo it physically degraded those in the photo, as if the photograph stole something from us. For each audio recording our ability to create music was diminished somehow.

So, here I am wide awake a 2:30 am, left wondering by a drug-induced dream what I’ve lost as I’ve played for cameras and recordings, and wondering how I have damaged others through my photography and audio recordings. I’m just glad I took my last does of Prednisone.

With even more cameras at the flea market I’m kind of glad my dream isn’t true, as far as I know.

I finished up the day with lunch with my sister Susan and her family in Pickens. It was another successful gig. Now I need to built up my playlist so that I can pull something out at a moment’s notice. 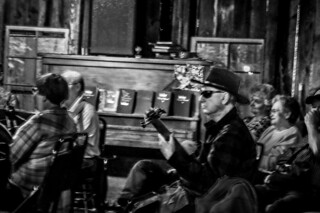 One thought on “Acceptance at Perryville”