This past week Furman University and First Baptist Church of Greenville have played host to composer Morten Lauridsen. Lauridsen taught several master classes at Furman, then worked with the choir from First Baptist and the Cantus Chamber Choir from the South Carolina Governor’s School for the Arts. The weekend culminated in a performance of Lauridsen’s Lux Aeterna at First Baptist Church, under the direction of Vivian Hamilton and accompanied by members of the Greenville Symphony Orchestra.

The public was invited to sit in on many of the sessions and rehearsals, and I took full advantage of that opportunity. Over the years I’ve performed many of Lauridsen’s works, and have always loved the lush, lyrical nature of his music. In 2002 we performed his Lux Aeterna with the Greenville Chorale. We have also sung other works both in the Herring Chamber Ensemble and the Chorale at large.

My first opportunity to meet Lauridsen was Thursday at a rehearsal with the Furman Chorale. This is a smaller ensemble conducted by Vivian Hamilton. Prior to the rehearsal Vivian, a classmate from Furman and longtime friend, introduced me to Lauridsen. We had a pleasant conversation about his stay so far, and how he was enjoying downtown Greenville, and especially the Westin Poinsett Hotel.

During the rehearsal Lauridsen talked about his methods and inspiration for composition. He told the students that he reads poetry daily, and is especially drawn to the works of Rainer Maria Rilke. He has set several of Rilke’s poems, including a five-song cycle entitled Les Chansons des Roses which includes one of his most popular pieces, Dirait-on. Lauridsen said that he got his first decent royalty check at age 50, and used it do to what any 50 year old should do – but a red sports car. He purchased a Miata with personalized license plates Dirait-on. 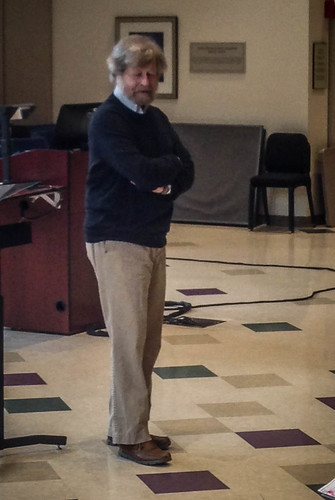 The Furman Chorale had been rehearsing Dirait-On, so Lauridsen worked with them on that piece. 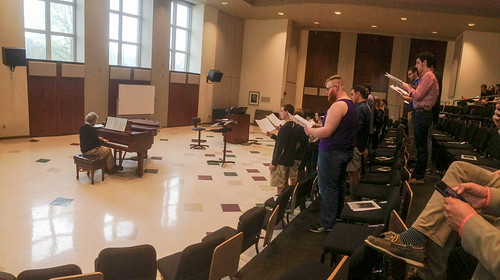 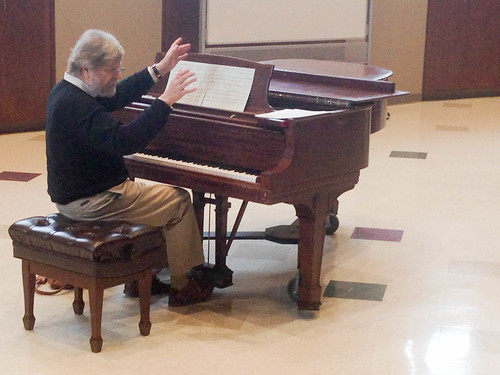 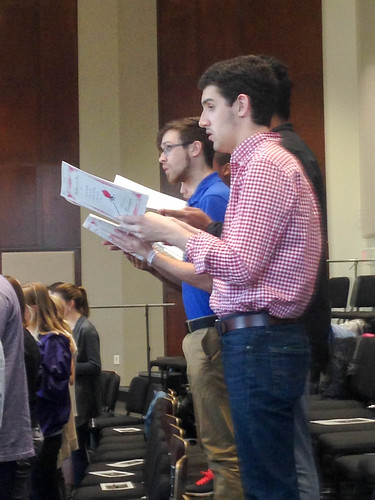 Lauridsen told a bit about his background. He was an accomplished pianist, but didn’t consider music as a vocation. In fact, he started out with the forestry service, and spent ten weeks one summer tending an isolated fire tower in Oregon. That was a turning point. He missed his piano and music in general, and decided they should have a greater place in his life. At that point he began studying composition, and eventually became chair of the Thorton School of Music at the University of Southern California and composer-in-residence for the Los Angeles Master Chorale.

The entire rehearsal was interspersed with anecdotes about Lauridsen’s life, and how these influence his compositions. This snippits revealed much about why his music sounds as it does. He said that he does much of his composing on Waldron Island, which is the northernmost island in the San Juan Islands in Washington State. The island has no electricity or running water. I guess he hasn’t completely given up his fire tower days.

One of the other pieces Lauridsen conducted with the Furman Chorale was his Sure on this Shining Night. Lauridsen spoke of how Broadway theater influenced his music. Many of his pieces contain long lyrical lines, and this is reflective of the theater influence, where the purpose is to tell a story. At the piano Lauridsen played and sang through the piece. With this background knowledge, and with Lauridsen’s soft solo voice and interpretation, I could imagine this from a musical like the Phantom of the Opera. Here is a recording from that session:

The Furman Chamber choir then sang the piece.

The Greenville Chamber Chorale performed this piece a couple of years ago. Here is the recording of our performance of that piece:

Now knowing Lauridsen’s thought processes about this piece, I can think of many ways our performance could have been improved. Oh well. Next time.

After the rehearsal I chatted with Lauridsen a bit more. I mentioned that my mother-in-law had lived in the San Juans and that I loved kayaking in that area. He said that he also enjoys kayaking, and has five of them up on the island.

My next encounter with Lauridsen was in a composition class for students on Friday. Mark Kilstofe is himself an excellent composer, and it was great seeing Lauridsen interact with his students. Long time friend and Furman classmate Richard Williamson brought his composition students over from Anderson University to sit in on the class. 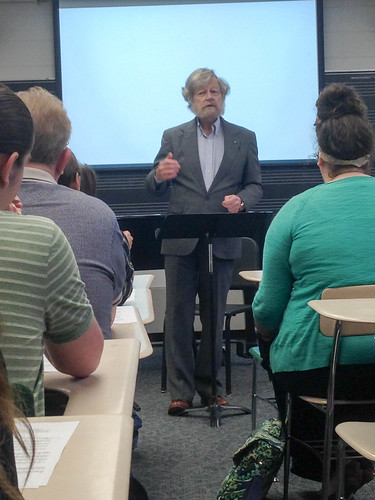 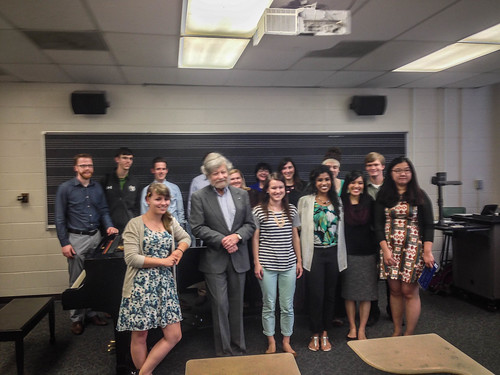 In this session Lauridsen covered much of the same material as he had in the rehearsal, but gave more details about harmonization and theory, as is appropriate for a composition class.

In addition to these sessions, Lauridsen also conducted rehearsals at First Baptist. I didn’t attend these, but fellow singer and photographer Wesley Smith is a member of the choir. These are photos that he provided from the rehearsals. Vivian Hamilton conducts, while Morten Lauridsen makes comments. There is also a photo of him autographing Vivian’s score. 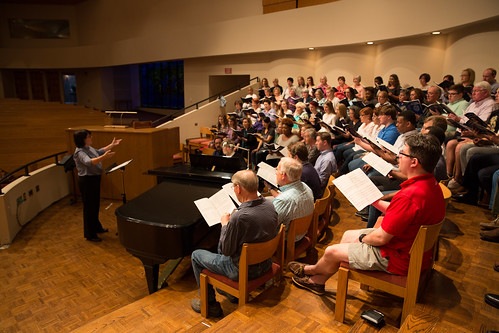 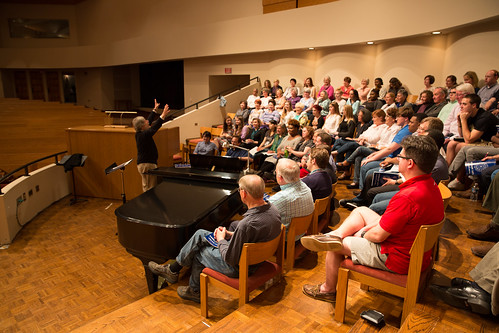 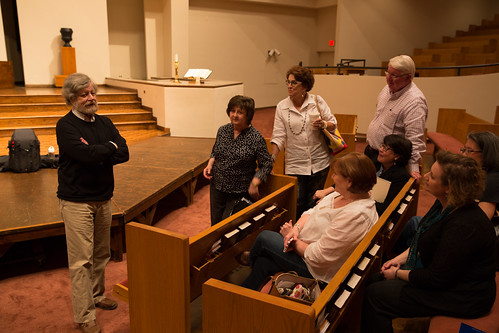 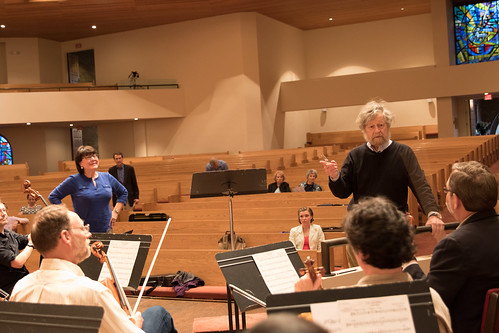 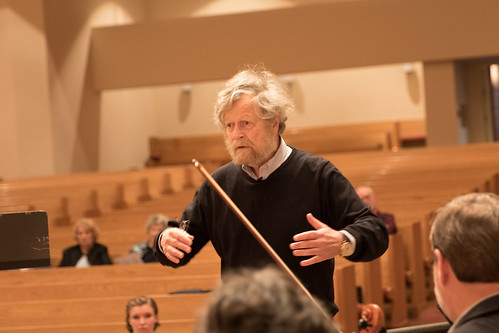 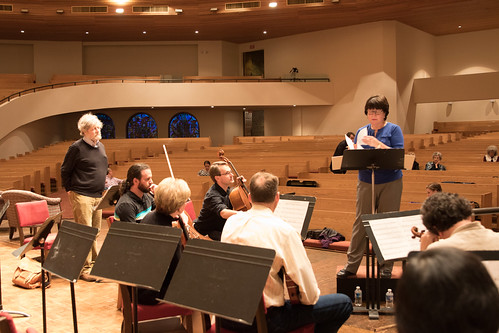 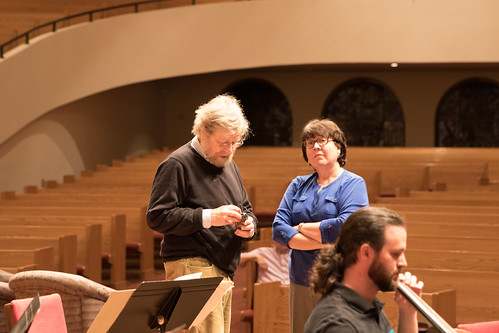 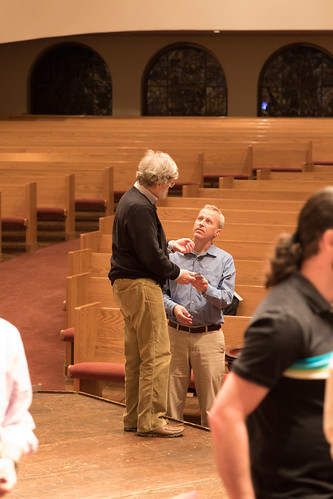 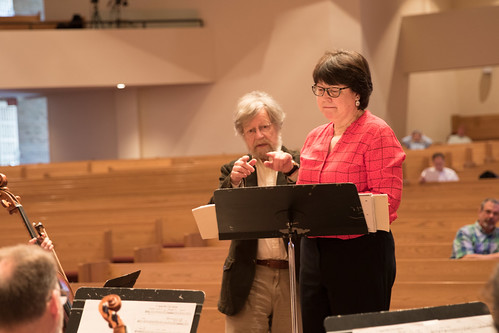 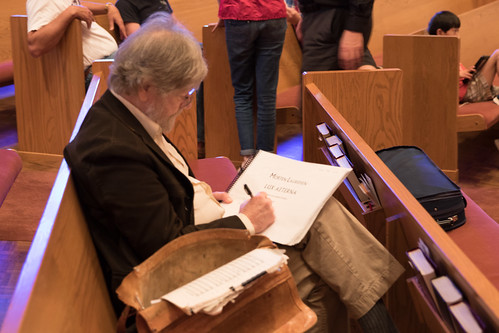 Sunday morning came, and I headed to First Baptist for the performance of Lux Aeterna. Lauridsen and Jim Dant, the senior minister at First Baptist sat on the stage and discussed the theological ideas behind Lux Aeterna. It was composed just as Lauridsen was learning about his mother’s terminal illness. She passed away while he was composing the piece. Each section deals with light and the comfort it brings. 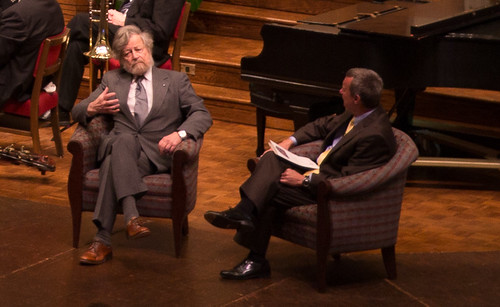 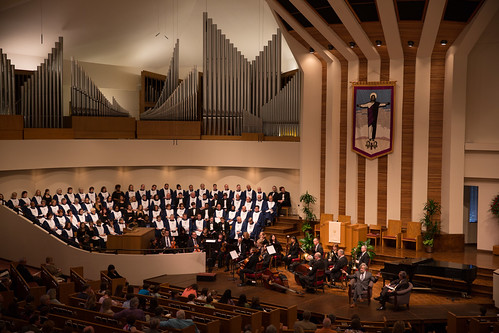 The performance was ethereal and very moving. The group sounded just as good as the Greenville Chorale. I had many friends in the choir, and tried to speak with as many of them as I could. It was an excellent culmination of this week with the composer.

My many thanks to Vivian Hamilton for arranging this opportunity to interact with a great composer. My thanks also to Wesley Smith for the photos from First Baptist. It truly was a spectacular experience. I kind of wish I had been in the choir singing with them, but every now and then it’s fun to sit back and enjoy.

Finally, here’s a short excerpt from a film about Lauridsen’s life and composition. This really gives the feel for the Pacific Northwest, as well as Lauridsen himself. 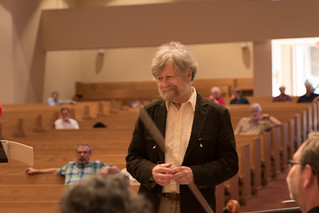 One thought on “A Weekend with Morten Lauridsen”