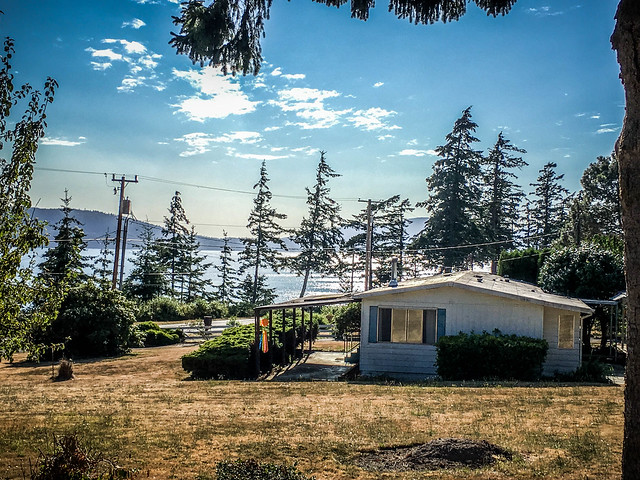 We’ve been living on Samish Island for six months now, halfway through our sojourn here. As I’ve been writing about our experiences I’ve been tossing out lots of place names. For my friends back home I thought it might be helpful to review the geography of the area.

Samish Island is located in the extreme northwest corner of Washington State, about a two-hour drive from Seattle. It’s closer to Canada than it is to Seattle. 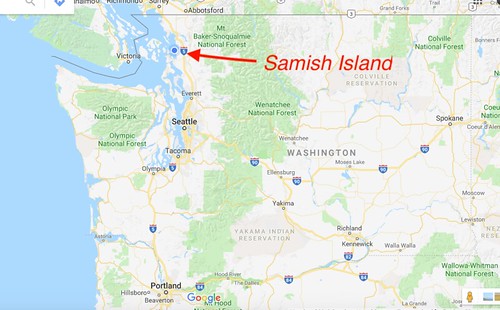 Now Samish is an island in name only, actually a peninsula. It was once separated from the mainland, but even then it was only barely an island. A small channel flowed between Samish Bay and Padilla Bay. In the late 1800s dikes were built and wetlands were drained to build up farmland that eventually reconnected the island to the mainland. 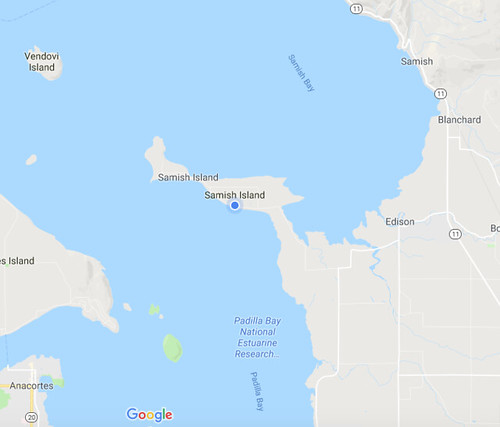 Even so, Samish retains the characteristics of an island. Our spot is about a hundred feet above the flatlands. Though there are farms on the island and much of it has been cleared for housing, etc, it still has some forested areas, especially on the west end. This photo shows Samish Island as seen from Chuckanut Mountain, and it really looks like an island here.

Samish Island is on the eastern edge of the San Juan Islands.

The name “Samish” comes from the Samish tribe. In addition to the island with this name, Samish River flows into Samish Bay just to the east of the island.

Another Native American name I keep tossing out is “Skagit.” As with Samish, the name is derived from a tribal name, and it applies to several geographic features. The most prominent of these is the Skagit River, which flows west from the Cascade Mountains. The wide, fertile valley formed by the river is known as the Skagit Valley.

So, naturally, the county we live in is Skagit County, which roughly covers the Skagit Valley drainage basin. It’s a long county that extends from the coast to deep into the Cascade Mountains. Northern Cascades National Park is at the eastern end of the county and Fidalgo Island marks the western edge. 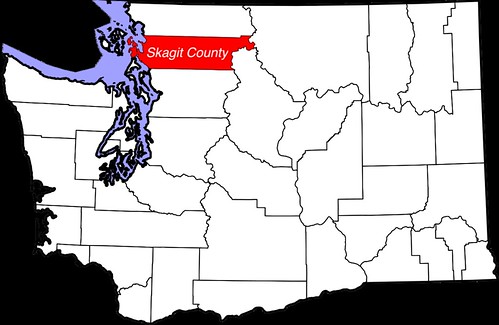 But back to our situation…

Our zip code has us living in Bow, WA. Bow isn’t a town, but a wide spot with a post office. There are a couple of very nice cafes across the street and a gun shop next door. This isn’t even the traditional location of Bow. Bow was/is actually a mile away on the railroad line. It was a station at the base of Bow Hill. There isn’t any commerce there, but a collection of houses and a church. 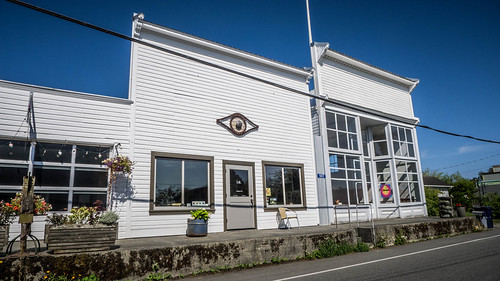 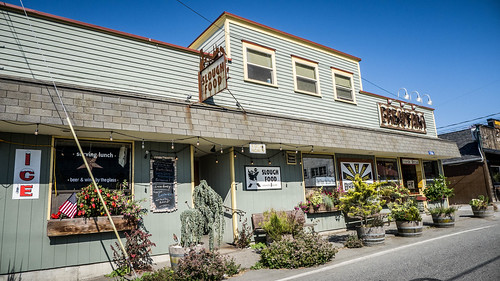 I often talk about driving across the “Flats.” These are the farmlands between the mountains and ridges. Part of the flats are reclaimed wetlands, and other sections are just areas that have been cleared of timber and leveled for farming.

The Samish and Skagit Rivers have created a rich area for farming, and they grow everything here from potatoes to berries to corn to just about everything else. 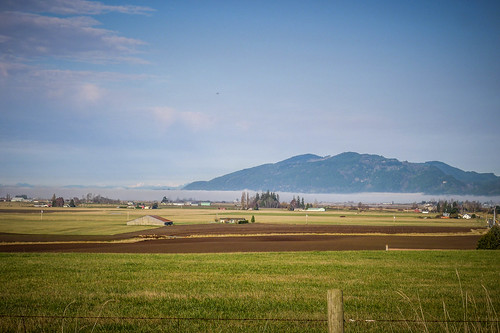 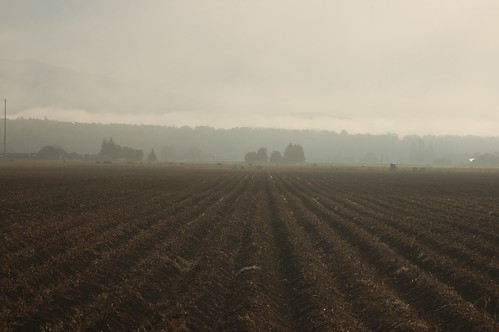 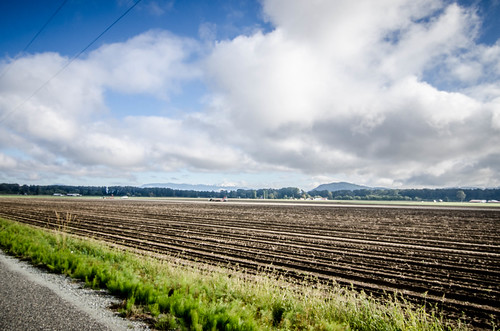 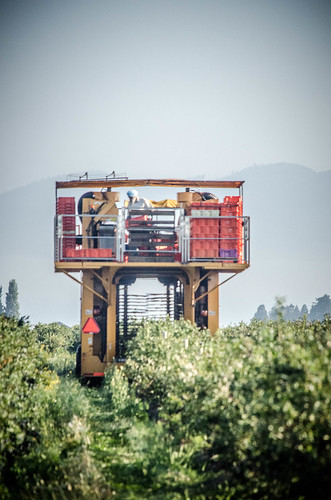 The Skagit is the larger of the two rivers. Its headwaters are high in the Cascades where much of it has been dammed to provide power. The waters are a unique turquoise from glacial runoff. 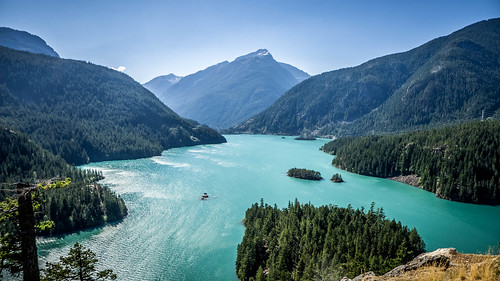 Just south of where it flows past Mount Vernon, the Skagit splits into the north and south forks and flows into Skagit Bay (naturally) in the south part of the county. Fir Island is formed by these town branches.

The Samish is much smaller. It would barely qualify as a creek in our area, and some of the sloughs are actually wider. It does widen out as it flows into Samish Bay to the north near the town of Edison. 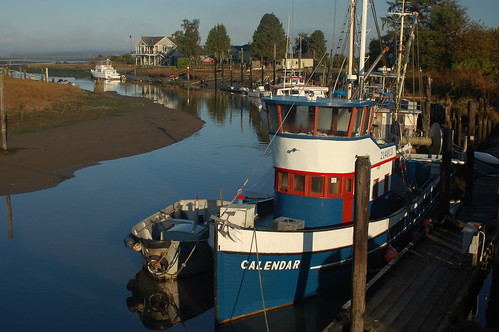 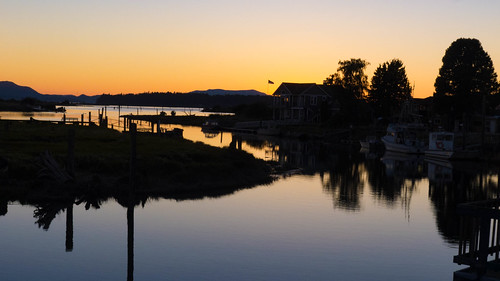 Even though Edison and Bow are the closest “towns”, we have to drive miles through the farmlands to get to anything resembling a grocery store. There are bars, restaurants, and art galleries much, much closer than the closest store. Priorities. I guess if you can get what you need fresh right from a farm-side stand, then why bother with stores? It does become a problem when things aren’t in season, though. 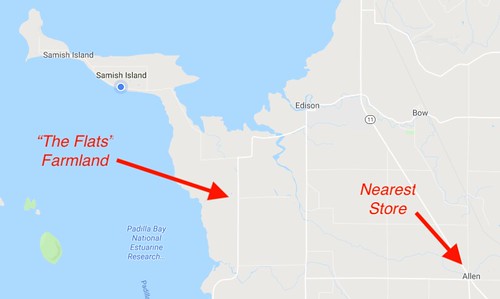 One of the biggest cash crops is tulip bulbs. Each spring the fields between the towns of La Conner and Mount Vernon are a riot of color. Here’s a photo I took sometime in the late 1990s. 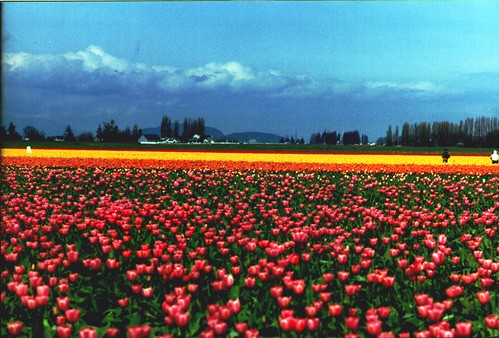 When we say “we’re going to town,” what we mean is that we’re heading to either Mount Vernon, Burlington, or occasionally Sedro-Woolley.

Each of these towns has a distinctive downtown, Main Street, and character, but they have almost merged into one entity. Mount Vernon is the county seat and largest of the three. Burlington and Mount Vernon are separated by the Skagit River. Sedro-Woolley, itself a merger between the communities of Sedro and Woolley a long time ago, is off to the northeast along the river. This is where we find grocery stores, Walmart, etc., etc. It’s about a thirty minute drive to get to these resources.

The town of Anacortes is actually closer as the crow flies, but separated from us by Padilla Bay. It’s a sizable town, but is most notable as a major ferry terminal connecting to the San Juan Islands and Vancouver Island. 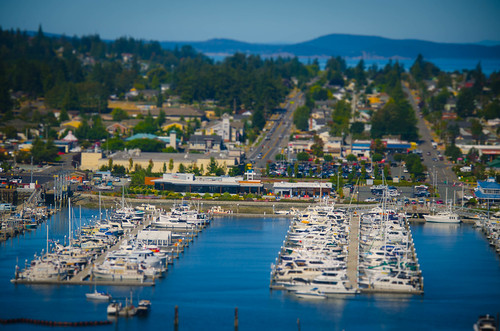 La Conner is a smaller town along the Swinomish Channel that separates Fidalgo Island from the mainland. It’s now mostly a tourist town and we only go there to walk through the shops and go to one of the many restaurants, not to get what we really need.

There are other smaller towns in Skagit County. Conway, Lyman, Hamilton, and Concrete are the more significant ones, but there are other communities scattered throughout.

North of us is the city of Bellingham, on the other side of Chuckanut and Blanchard Mountains from the Skagit Valley. It’s actually in Whatcom County. 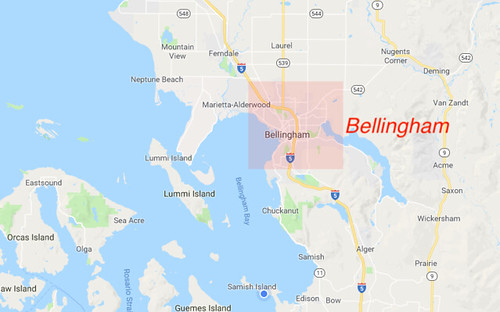 Some other geographic features…

Aside from the islands, the Flats, the farms, and the rivers, Mount Baker dominates everything at 10,781 feet. It’s a dormant volcano that last erupted in 1880 (according to Wikipedia.) On a clear day it stands out against the skyline. From our area we can occasionally see Mount Rainier to the south on the horizon, and we often see the snow-capped Olympic Mountains to our southwest. From other parts of the island and county we can see other snow-capped peaks of the Cascades as well as the Canadian Rockies. 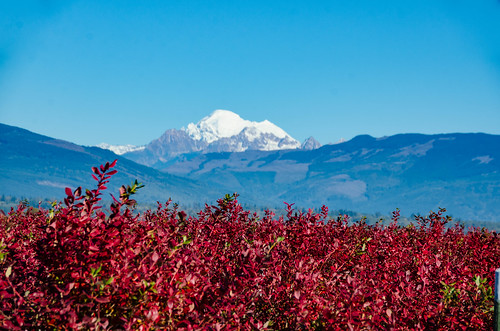 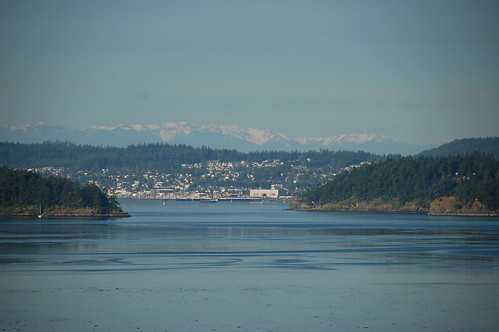 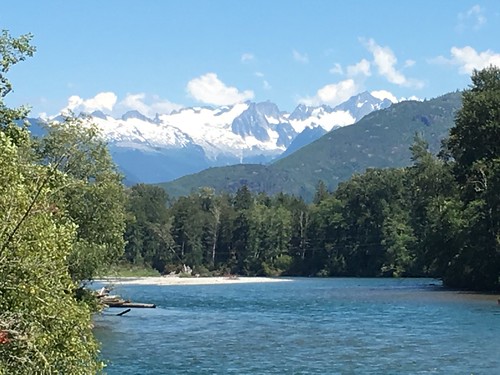 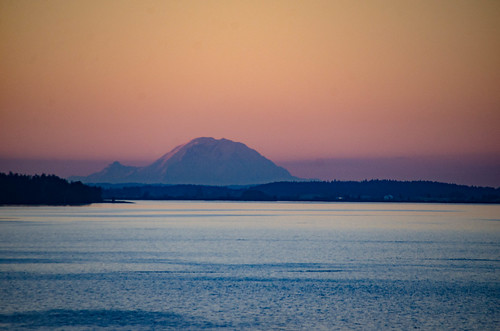 Fidalgo and especially Whidbey Island are the two largest islands along the coast. These are separated by Deception Pass, a narrow passageway connecting the Strait of San Juan to Skagit Bay. Also to the south in Snohomish County are the towns of Stanwood, Marysville, and Everett. When you get down that far, you’re starting to get into the bedroom communities of Seattle, and that’s where the traffic in I-5 starts to get bad. 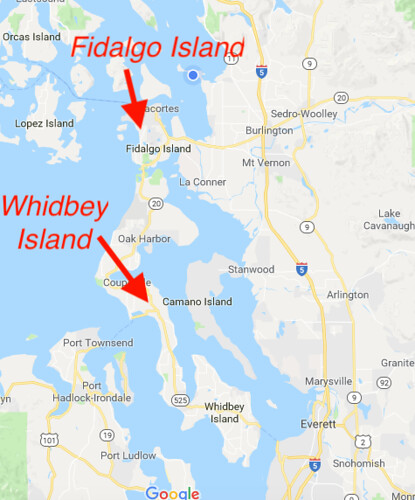 I get a lot of questions about the weather up here. “You’re so far north, isn’t it cold up there?” “Doesn’t it rain a lot?” As for weather, it really depends on where you are at any given time. With the influence of so many geographical features – tall mountains, coastal waters, etc – there are also many microclimates. The weather in the San Juan Islands can be quite moderate. Drive into town and it can be much cooler and wetter. Heck, it even depends on whether you’re on the north or the south side of Samish Island. Head into the higher elevations of the Cascades and you get something entirely different.

In general, the summers are cooler, but the winters are warmer than back home. During the summers we get morning lows in the 50s with highs in 60s and 70s. Sometimes it creeps into the 80s. Summers are usually the dry season. This past summer it was very dry with a burn ban in effect.

As for winter, it’s been wetter, with constant rain for several days in a row. Our morning lows have been around 40 and the highs are around 50, so it doesn’t vary much. Occasionally it will get down to freezing, and we have had a light dusting of snow.

Even though it doesn’t get as cold, sometimes it seems colder. When we lived in Arizona we kept hearing, “but it’s a dry heat.” Up here I guess you could say, “but it’s a wet, windy cold.” The winds can be brutal, and combined with the moisture it seems to get into your bones worse than the colder temperatures back home. I had to stock up on fleece-lined pants and heavier coats when I arrived.

So that about wraps up my primer on our geography, from the perspective of a Southern visitor. At least now you’ll have some idea of when when I write about an Irish jam session in Bellingham or a visit to La Conner. 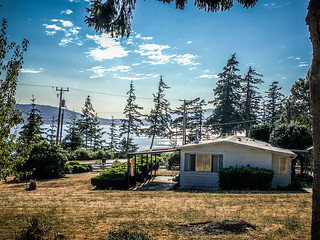 2 thoughts on “A Skagit Geography Primer”