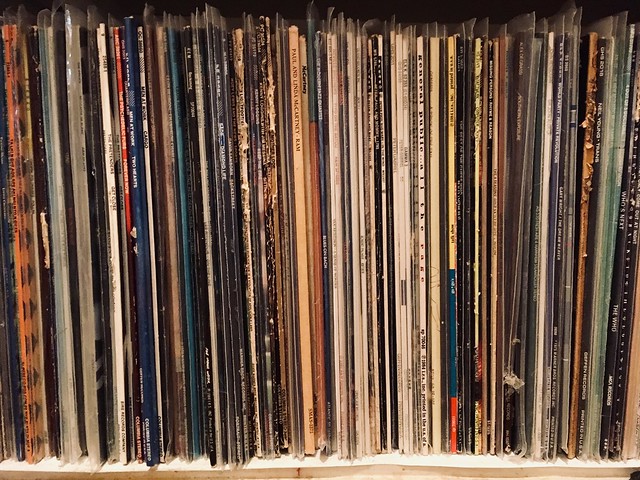 I usually don’t go in for Facebook memes or games. My friend J. Todd Settle tagged me in one recently and I gave it some serious thought. The idea is to post twenty albums that had some influence over you. According to the rules you’re supposed to post one album per day, then tag someone else to annoy each day. I just don’t do that sort of stuff, but I do like the idea of reflecting on the music that played a part in your life. So, rather than annoy friends on Facebook, I’m going to post the whole kit and caboodle here. Sorry, J. Todd. I’ve always been an iconoclast. You’ve known that ever since we were both DJs at WPLS.

Any age? OK. I’ve presented these in the approximate order in which I encountered them, and not necessarily when they were released. Here it goes…

Arnlelfur Lawrence Thorsteinson, aka Larry Thor, was a radio and television actor who was probably best known as the voice of the radio announcer on Gilligan’s Island. Sometime in the early 1960s he released an album of original children’s songs. The songs were a bit subversive and somewhat twisted. Of course they appealed to me. To this day I still listen to and sing these sings.

The album is available online, and I have provided copies of the album on CD to all of my nieces and nephews so that they can corrupt their children, too.

My father was a very conservative Pentecostal Holiness preacher. When we were young Rock and Roll was forbidden. However, there were some genres that skirted that line between acceptable and evil. Folk music seemed to fall just barely on the side of acceptable, as long as it didn’t fall into liberal politics.

The Kingston Trio fell into that narrow band of acceptability. At Large was released in June of 1959, followed quickly by Here We Go Again! in October of that same year. This was my first exposure to folk music, and I sang these songs over and over.

3. Herb Albert and the Tijuana Brass – Whipped Cream and Other Delights – 1965

Herb Albert and the Tijuana Brass was another one of those groups that passed into acceptable. I think it was allowed because it didn’t sound like Rock and Roll. However, I don’t know if my dad ever saw this risque album cover.

This album was released in 1965. I learned to play the trumpet at an early age and made many attempts to play these songs.

When I agreed to do this I told J. Todd that my list would be a weird one. This album certainly fills that niche.

Religious music was acceptable, and I’m Gonna Sing was one that my mother played all the time. It was one of my first exposures to choral music. More importantly, it was the first place where I learned about music from the “The Sacred Harp.”

I still have this album. It comes up for sale occasionally on eBay and Amazon, and is even available on Apple iTunes. Someone has uploaded it to YouTube.

This album is significant in that it was the first one I bought with my own money. I was an aspiring keyboard player and the music of Bach fascinated me. I was also fascinated with pipe organs since I’d seen one on a field trip when I was in the third grade. Since it was classical, this album fell into the acceptable category. This was the first place I heard Bach’s Fugue in A Minor, a piece I still attempt (poorly) to play.

By this time I’d figured out ways around my parents’ edict against popular music. I had a small portable radio and had educated myself and ate up Top 10 lists of this music. Since it was forbidden, I wanted to learn as much about it as possible. Also, since I did play keyboards, most of the next several albums are keyboard heavy.

In the late 1960s and into the 1970s synthesizers were just coming into the popular conscience. Wendy (then Walter) Carlos’s album of synthesized Bach was amazing and innovative. I never owned a copy (and still don’t have even a digital copy), but its music was still an influence.

I was 14 when I first heard “Stairway to Heaven.” I was blown away. It was on a late-night radio station and I was listening surreptitiously. It wasn’t until much later that I heard the entire album.

The 70s were the peak of Prog Rock, though we didn’t call it that at the time. The instrumentation was fantastic and tight. Even now the opening to Roundabout is one of the riffs I play when I pick up a guitar.

This album was full of great songs. More importantly, it was full of songs with cool synthesizer licks. I tried emulating the synth sounds for Frankenstein on an old Baldwin organ, with some modest success. One iteration of our high school rock band attempted it. “Free Ride” was another favorite, but all of the songs rocked. I had this album on 8-track tape.

Wakeman was the keyboardist for Yes, and had the most amazing keyboard setup. I loved the entire Wakeman discography (up to then), including The Myths and Legends of King Arthur and Journey to the Center of the Earth. However, it was this album with its use of the pipe organ at St. Giles in Edinburgh that most impressed me.

Queen’s tagline at the time was “No synths!”, which would seem to be at odds with all of the albums I’ve posted so far. The intricate vocals and elaborate guitar work made up for the lack of keyboards. It doesn’t hurt that this was the album that introduced “Bohemian Rhapsody” to the world.

“Carry On, My Wayward Son.” Need I say more? After a gig in Cleveland Park in Greenville our band was described in The Greenville News as “reminiscent of Kansas with its dual-keyboard setup.” We never played any Kansas music (only originals), but I always wished we could play Carry On.

…and for the record, I can play it on my current keyboard setup.

1977 was a watershed year for me, musically. It was my junior year. I’d been jamming with my friend Jeff Holmes for a year and had gotten involved in choral music in high school. I’d been part of a touring gospel ensemble and had done some musical theater. Most importantly, I was in Mr. Tommy Sublett’s American History class.

Mr. Sublett, or “Sub”, as we called him, was one of those cool teachers who became friends with his students. He lived alone in a tiny house which contained his books and his massive record collection. We would go over to listen to music and discuss life. I saw “Monty Python and the Holy Grail” for the first time at Sub’s house. I don’t think this would have been possible in this day and age, given today’s sensibilities and fears for the safety of our youth.

Sub trusted us enough to loan us albums from his collection, which we would record onto stereo cassette. This was the only way I could build our collection as I didn’t have any income and my parents certainly weren’t going to buy my any of these records. He introduced us to several bands and albums, Jethro Tull chief among them.

Songs from the Wood featured keyboards (of course) and an interesting combination of rock and Renaissance. I loved everything about it. To this day hearing the song “Walking on Velvet Green” reminds me of a summer fling.

When this album came out in 1979 I had just started my freshman year at Furman University. The Wall became the soundtrack for my first semester, embodying the highs and disappointments of college life. I lived by myself in an off-campus apartment and my upstairs neighbor would play it on his huge stereo until the wee hours of the morning.

I didn’t develop an appreciation for The Who until I was in college. To me this album represents the best collection of their work.

There was so much more music during college years that it’s hard to make sense of all of it. I was a DJ at the college radio station and was playing keyboards with a band. I could create a list of 20 albums just from those four years. Instead, I’m going to just skip a bit, brother…

In high school and college I loved the music of The Police. When Sting released his first solo album it was quite different, taking advantage of the talents of some incredible jazz musicians. The writing was original and literary. Two of the songs each remind me of ex-girlfriends from that era.

“Sledgehammer” may have been the single, but “Red Rain” was the song that blew me away. I heard Peter Gabriel perform this live at the Omni in Atlanta at A Conspiracy of Hope, a concert to benefit Amnesty International. They opened with “Red Rain.” That show also featured a reunion of Sting and The Police, U2, The Neville Brothers, and Lou Reed, among others.

Suzanne Vega’s first self-entitled album was a tour-de-force of excellent lyrics and imagery combined with tight orchestration using subtle synths and guitar. It’s nearly perfect. I listen to it over and over. Vega has done some good work since then, but none has impressed me as much as her first album.

I honestly don’t remember much about this album. I can remember the opening notes of the first tracks, but that’s about it. This one is significant, however, because it was the first CD I ever purchased.

…and that’s my somewhat random list of 20 albums. There are lots of my favorite bands and songs that are NOT represented on this list. So, please, no comments like, “I can’t believe that you didn’t include _____ . ”

This list seem to stop in 1985, but my album purchasing certainly didn’t stop in that year. As I get older my album purchasing has become more selective. I don’t seem to be as much of a “completist” in that I feel like I’ve got to have absolutely every album by my favorite artists.

In fact collections of songs as “albums” seems to be a lost art, despite the resurgence of vinyl. Maybe I should do another list of 20 albums covering that last 30 years or so. We’ll see.